The economic impact of the TTIP

Free trade agreements have traditionally been based on reducing the tariffs levied on goods traded as the main way of increasing trade between countries. Currently, however, the biggest obstacles to international trade are non-tariff barriers (NTBs), including disparity between quality standards and different legal and regulatory requirements between countries. The bilateral agreement being negotiated between the European Union (EU) and United States (US) stresses these barriers and aims to reduce them in order to boost trade and investment in three ways: by providing access to markets, harmonising legislation and creating new rules that make world trade easier and more sustainable.

To provide European companies with access to US markets and vice versa, the first proposal is to reduce current tariff barriers for agricultural and industrial products. Secondly the TTIP aims to make it easier to get licences for professional services such as consultancy and auditing, as well as equalling conditions of access to the market for firms from different countries that provide services in certain regulated sectors (such as telecommunications and public contracts).

The TTIP also tackles the necessary cooperation to harmonise legislation governing firms that wish to export their products. This aspect is particularly complex as regulatory compatibility between European and US laws must necessarily cover a huge range of products and services of differing types, ranging from drugs to aeronautics. The TTIP hopes to reduce technical barriers to trade by homogenising standards for production processes, technical requirements for exports and the procedures needed to test a product, avoiding duplication in each country. In all cases the aim is to safeguard food security and animal and plant health as well as guarantee the preferences of each country, a particularly as evidenced by the different preferences between one region and another regarding genetically modified foods. Lastly the treaty also attempts to reach agreements to boost global trade in several areas such as protecting investment and intellectual property rights, and to make this trade sustainable. Protecting investments and resolving differences between investors and states is a complex area for the TTIP and is dealt with in detail in the article «The controversies of the TTIP: insurmountable difficulties?» in this Dossier. The treaty also aims to achieve commitments regarding labour and environmental aspects of trade in order to establish guidelines that will become international standards.

After summarising the fundamental elements of the free trade treaty, it is useful to review the benefits and costs involved for both the EU and the US. Naturally its impact will vary according to the extent of the agreements included in each of these three areas. Benefits in terms of tariffs will be limited taking into account the fact that these are already low between both regions (less than 2% of the price on average) and that more than half their trade is not subject to tariffs. The economic impact of a tariff reduction will therefore only be significant for products whose rates are higher, such as processed food and motor vehicles (with tariffs of 14.6% and 8.0% in the EU, respectively). On the other hand, repercussions due to the reduction in NTBs will be considerable as these currently entail considerable extra costs. The ad valorem equivalent of NTBs is estimated at an 8.5% increase on average for services and 21.5% for goods, although this figure varies between sectors (see the first graph), with an increase of over 50% in the food and beverage sector.1 As has already been mentioned, NTBs cover many aspects and differ in nature so that, unlike tariffs, their complete elimination is not easy or even realistic from a technical or political point of view. The final impact of the treaty will therefore depend on how far these barriers are reduced.

The economic impact of the TTIP as a whole on GDP could be considerable. A study by the CEPR has analysed this, modelling world trade up to 2027 via different scenarios of a reduction in the various obstacles to trade between the EU and US.2 In spite of the uncertainty surrounding both the final form of the agreement and also its consequences for world trade, in the most ambitious scenario the TTIP could entail a permanent rise in GDP of 0.48% for the EU and 0.39% for the US. This moderate impact would be equivalent to an annual increase in disposable income for each household of 545 and 655 euros, respectively. A breakdown of the impact by sector shows that most of this growth in GDP would be due to the reduction in non-tariff barriers, in particular those related to the trade of goods (see the second graph). However, it is important to note that, while the positive net benefits are spread among most of the population, the costs are concentrated in certain groups of individuals who are negatively affected by the treaty, which is why they reject it and are pressurising against it.

Lastly, the TTIP would not only transform trade between the European Union and the United States but could also have an effect on trade at a global level. From the point of view of the countries signing the TTIP, trade between the EU and the US and third party countries is likely to increase since the resulting regulatory harmonisation would reduce export costs for both. Similarly, if the treaty became an international benchmark and encouraged greater regulatory harmonisation at a global scale, the export costs of European and US firms would also decrease.

The impact of the TTIP on other countries could be rather more ambiguous in some cases, however. The exports from some of these countries to the EU or US could decrease as a result of trade being diverted as it would be more profitable for the EU and US to trade with each other after signing the TTIP. However, the positive effects of increased trade as a result of increased regulatory harmonisation are expected to be greater and the treaty's impact is likely to be favourable in general. In any case, its effect would be felt much less by third party countries than those belonging to the trade agreement. The study produced by the CEPR estimates that the consequences of the TTIP will be positive and that it will increase the GDP of the rest of the countries by between 0.07% and 0.14%. Specifically, the countries of South East Asia will benefit to a greater extent (+0.45%-0.89%) thanks to the larger relative weight of trade in their economies. The Bertelsmann Foundation, on the other hand, estimates that the trade diverted to treaty countries could entail serious negative effects for countries such as Canada and Mexico which currently have a free trade agreement with the United States, as well as developing countries. However, it should be noted that the study may be overestimating the negative impact as it only takes into account the effect of diverted trade and not the advantages of greater legislative harmonisation between the EU and US for the rest of the countries.3

Lastly, the impact of the TTIP on business will vary depending on the type of firm and economic sector. In general, SMEs could benefit more from the agreement as barriers (especially non-tariff) affect them to a greater extent since they are not large enough to overcome them. Similarly, some sectors would be more favoured than others and a scenario of an ambitious reduction in NTBs would result in greater production in almost all of them.

Although the potential impact of the agreement seems positive, it is important to point out that its ultimate consequences will depend both on the breadth and depth of the measures approved. There are many difficulties involved in first reaching an agreement and then putting it into practice. The next two articles in the Dossier («The controversies of the TTIP: insurmountable difficulties?» and «How the financial system fits into the TTIP: reality or fiction?») examine the principal challenges in more detail.

2. For more details on the model and different scenarios and hypotheses used, see J. François et al. (2013) «Reducing Trans-Atlantic barriers to trade and investment: an economic assessment». Document produced by the CEPR for the European Commission. 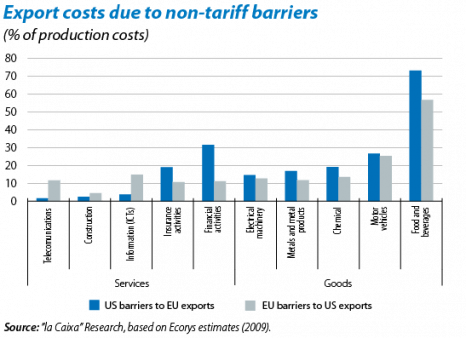 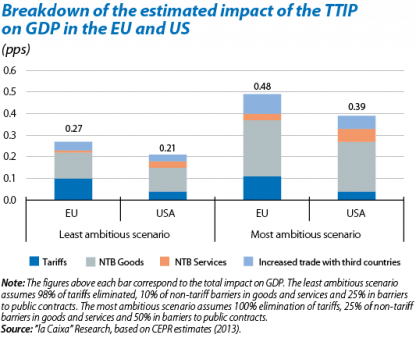 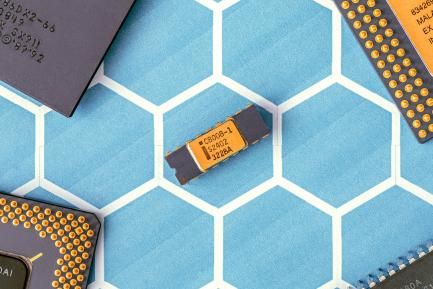 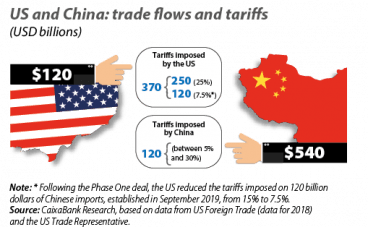 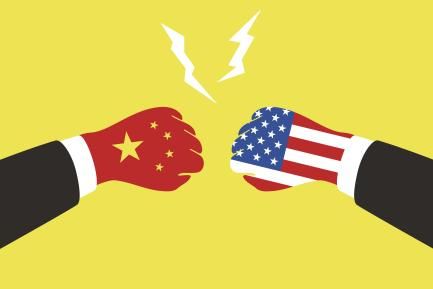 The threat of protectionism in the global economy