In this era of immediacy and compulsive tweets, pessimism (when it is not alarm) reigns supreme. Many analysts and citizens already take it as a given that a financial crisis is coming in 2020. What truth lies in this bold assertion? Is a recession inevitable? In this article, we begin the now classic Outlook Dossier of each December by presenting various exercises and reflections to shed a little light.

We must not deceive ourselves: the world’s major economies are in the midst of a slowdown that is proving to be more pronounced than expected and which is set to continue in 2020. In particular, we see a significant slowdown in the US (around 0.5 pps less growth), a stabilisation in the euro area at modest levels, going from a rate of 1.9% in 2018 to 1.1% in 2019, and a gradual slowdown in China, bringing the country’s growth to well below 6.0%. All in all, we expect the global economy to grow in 2020 slightly more than it did in 2019, hoisted up by the improvement in economic activity in several emerging economies such as India, Brazil, Turkey and Russia.

The idea of a recession, however, is something quite different,1 as it would imply a substantial deterioration of the downturn in the major economies compared to our forecast. To seek some clarity on the matter, we analysed the probability of a recession occurring in 2020 in the euro area and in the US, on the basis of the evolution seen of four indicators that are considered key in the literature. These include two macroeconomic indicators (manufacturing PMI and consumer confidence) and two financial indicators (yield curve and corporate risk premium).2 The results are relatively reassuring, since the probability of recession they suggest is less than 15%, except in two cases where there would be an orange flag (no cases of red flags): only the US yield curve and the euro area manufacturing PMI show a probability of recession between 15% and 30% (see first chart).

Therefore, we can conclude that, today, the risk of recession is relatively contained. This does not change the fact that the slowdown in the global economy is a palpable reality and, indeed, more pronounced than expected a year ago, when there were no orange flags. Can we draw a line under the issue and, while we are at it, the article too? Certainly not. Global factors such as heightened uncertainty in the spheres of politics and trade are behind the slowdown, so any new adverse shocks could lead us into a more sombre situation. That is why it is key to assess the sensitivity of growth to these risks, which is what we analyse in the next section.

Analysis of the main risks in 2020

In part, the economic slowdown in which we are currently immersed is the result of the greater maturity of the business cycle in the world’s major economies. Intuitively, when the unemployment rate is at minimum levels, as is the case in Germany and the US, it is harder to expand production since hiring new staff is more difficult. This more mature phase of the cycle led us to believe that the slowdown would be gradual, especially since the major economies do not generally have any significant macroeconomic or financial imbalances (the most obvious exception is the high corporate debt in China). The problem is that there have been two adverse shocks affecting economies that are already in a slowdown due to the cycle: on the one hand, an uncertainty shock caused by the trade war between the US and China and by heightened political tensions and, on the other, the contraction of the manufacturing sector, which has been particularly painful for the automotive industry.

How will the political and trade risks evolve in 2020? To answer this question, we have used the historical relationship to estimate the sensitivity of economic growth to changes in the political uncertainty index developed by the economists Baker, Bloom and Davis, controllers for the main macroeconomic variables in both the US and the euro area. The results, presented in the second chart, show that our growth outlook is consistent with a stabilisation of political uncertainty at relatively high levels.

Even so, in the US we cannot rule out a significant increase in political uncertainty due to the new electoral cycle, which could shave more than 5 decimal points off growth according to our sensitivity analysis. The key will lie in how the impeachment process against President Donald Trump unfolds and the degree of polarisation in the November 2020 presidential elections. A moderate Democrat candidate could lower the fierceness of the electoral campaign, while a candidate with a more heterodox position could lead to a more intense electoral confrontation that might bring with it greater uncertainty.

In the euro area, our estimates suggest that we will not see a dramatic increase in political uncertainty in 2020. On the one hand, the likelihood of a hard Brexit has fallen significantly (but not disappeared), although the discussions to forge the new trade agreement between the United Kingdom and the EU will play a prominent role in 2020. On the other hand, the new coalition government in Italy is taking a more constructive approach, while the new year is mostly clear in electoral terms, since there are no major election dates on the calendar at the European level (at least in theory).

As we have seen, our scenario does not envisage a global recession. However, there is one factor that could amplify the downturn and which we must not lose sight of. This is the so-called fear effect: if the risks described and the way they are perceived end up affecting consumer confidence and business sentiment, then the scope of the uncertainty shock could be greater. To avoid creating a fear effect, it is critical that the main economic institutions, and economists as a collective, make a balanced assessment of the macroeconomic scenario and avoid falling into unfounded alarmism. Otherwise, this could contribute to creating a climate of rampant pessimism that leads to growth falling by more than expected.

In the case of the private sector, we have already seen how the latest business sentiment indicators in the services sector are registering levels that, while reasonable, are somewhat less comfortable. As for households, we have assessed whether a fear effect is occurring that is eroding private consumption in the US and the euro area. To do this, we analysed the portion of the change in consumption that is not explained by either the macroeconomic fundamentals or uncertainty, and which could be related to emotions such as fear, pessimism or, on the contrary, excessive confidence. The results, presented in the third and last chart, show that the fear effect exists and is playing a relatively important role both in the US and in the euro area.

In short, everything suggests that 2020 will be a year marked by a continuation of the economic slowdown in the major economies. Nevertheless, it seems unlikely that we will fall into a global recession (in fact, our forecasts point to global growth of slightly over 3.0%). However, containing the surge in trade-related and political uncertainty, which have already claimed a heavy toll, will be key, as will be an adequate response from economic policy. As such, 2020 will be a demanding year, but things may turn out better than some doomsayers would suggest.

2. We use a probit model with a binary dependent variable equal to 1 if quarter-on-quarter growth is negative, and of 0 if it is not. We estimate the impact of each indicator on this variable over different time horizons (one quarter in the future, in two quarters, etc.). Subsequently, we predict the probabilities of a recession occurring in 2020 using the latest data from the indicators. 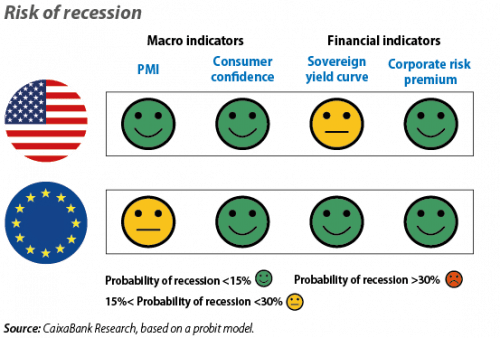 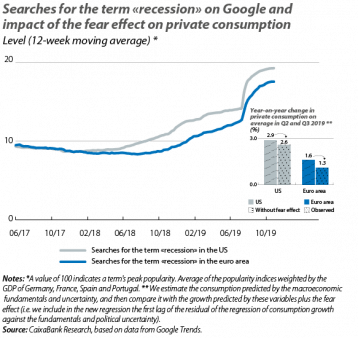