Asia, an indebted but dynamic region

Monitoring the map of weaknesses of the different emerging countries has become more important after the tensions they've suffered over the last year. Debt takes pride of place in this assessment. The region of Asia (India and the Far East, except Japan) notably increased its total level of debt between 2007 and 2013: from 149% to 211% of GDP, taking into account all households, non-financial firms and government. Assessing just how far this might be a weakness requires the examination of certain details.

The Asian economies, with a growth model based on exports, were hit hard when global demand weakened due to the crisis starting in 2007. Their response to this shock was to stimulate domestic demand by increasing their debt. The initial conditions were favourable for embarking on such a path: excess savings (reflected in a current surplus of 7.4% of GDP) and a fiscal deficit that was practically zero. Between 2009 and 2012, this indebtedness was supported by relaxed financial conditions and low real interest rates, resulting from easy monetary conditions worldwide encouraged by the US Federal Reserve but also by the emerging countries themselves.

Asia's debt is concentrated mostly in the sector of non-financial firms. In GDP terms, firms went from 81% debt in 2007 to 132% in 2013, equivalent to 51 points of the aforementioned 62. This is a high level in historical terms and also in comparison with other countries. The great risk of this situation lies in the fact that this corporate debt is not helping to improve the productivity of capital. Without such improvements, growth is likely to moderate somewhat which, together with an ageing population, would make it difficult to reduce the debt. A probable rise in real interest rates, encouraged by the Fed's change in policy, would complicate the scenario even further.

However, the situation is not the same in each country. The relatively positive note is that the highest figures in terms of debt and its recent trend are concentrated in the region's «strong» economies: China, Hong Kong, Singapore and South Korea. However, those economies considered to be «weaker», namely India and Indonesia, have more moderate debt levels, even taking their lower per capita income into account. Although India has the region's largest public debt (67% of GDP), high inflation and pending structural reforms, it is encouraging to note that its total debt (firms, households and government) remained at 136% of GDP in 2013, slightly below the average for the region and only 7 points higher than its 2007 level. For its part, Indonesia recorded a total debt of 74% in 2013, the lowest in the group of countries  analysed. The demographic factor is also in their favour, as India and Indonesia are avoiding the general ageing trend of the predominant population in the region. The most striking figures correspond to China, whose total debt went from  148% to 244% of GDP (from 97% to 173% in the case of non-financial firms). The risk this entails must be evaluated within the context of the rebalancing and transformation of the Chinese economy, as well as the peculiar way such a  system operates, dominated as it is by the state. Hong Kong, Singapore and Korea also have high debt but in the context of much higher per capita income and a more developed financial system. In any case, we must not forget the strengths inherent in the region, especially its high growth potential. Moreover, overall governments and households are maintaining a relatively subdued level of debt. 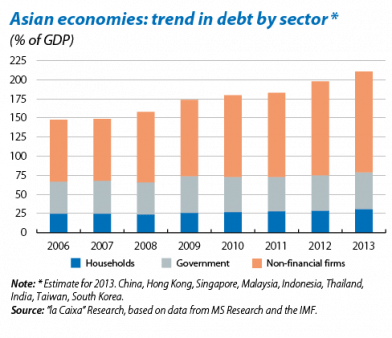 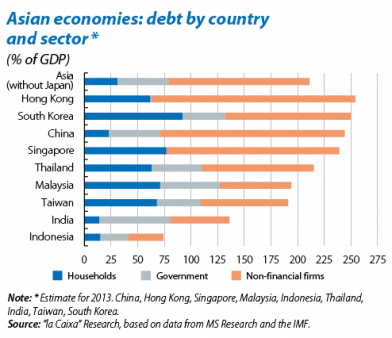