Is capitalism in crisis? Is the «economic system based on the private ownership of means of production and the free market», as it is defined by the Royal Spanish Academy, failing? 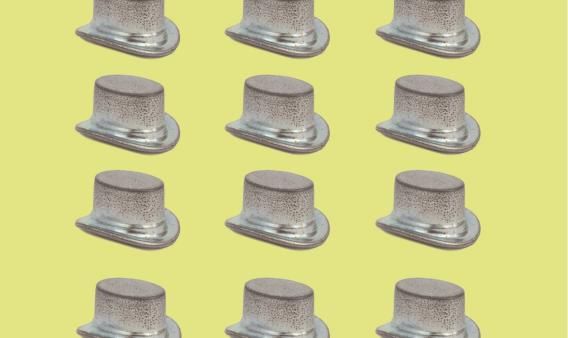 At the very least, we can point out some dysfunctions it is showing: according to a leading study by the Edelman Foundation, 56% of those interviewed stated that «capitalism does more harm than good» and 74% considered that it was unjust.1 Also, in that same study, in 22 out of the 28 countries examined, more than 50% of respondents believed that capitalism was harmful (60% in Spain). The questioning of capitalism is therefore geographically widespread, but perhaps of particular relevance is the disaffection arising in the US, without doubt the country we associate most closely with the market economy.

During the current US presidential race, the media have emphasised that a portion of the electorate supported «socialist» positions. This atypical situation surely explains why one of the Democratic Party candidates, Bernie Sanders, was able to remain for many months as a possible nominee despite proposals which, in the North American context, could be considered closer to the extremes than to the centre. The fact that in the eyes of a European voter we need to translate «socialist» as social democrat in order to better understand what Sanders proposed does not exempt us from reflecting on the substance of the matter: is the US, the epicentre of the market economy, questioning capitalism?

The data suggest that, at a minimum, the economic model is being re-evaluated in North America. Opinion studies conducted by the Pew Research Center support the view that, year after year, a significant percentage of Americans tend to be dissatisfied with capitalism.2 Indeed, in 2019, 33% of respondents claimed to have a negative view of this economic and social system. Of course, disaffection with the market economy is not uniform, as it varies according to ideology (there is greater dissatisfaction among Democrats), income level (there is less support among those on lower incomes), and age (younger people tend to have a more critical view). 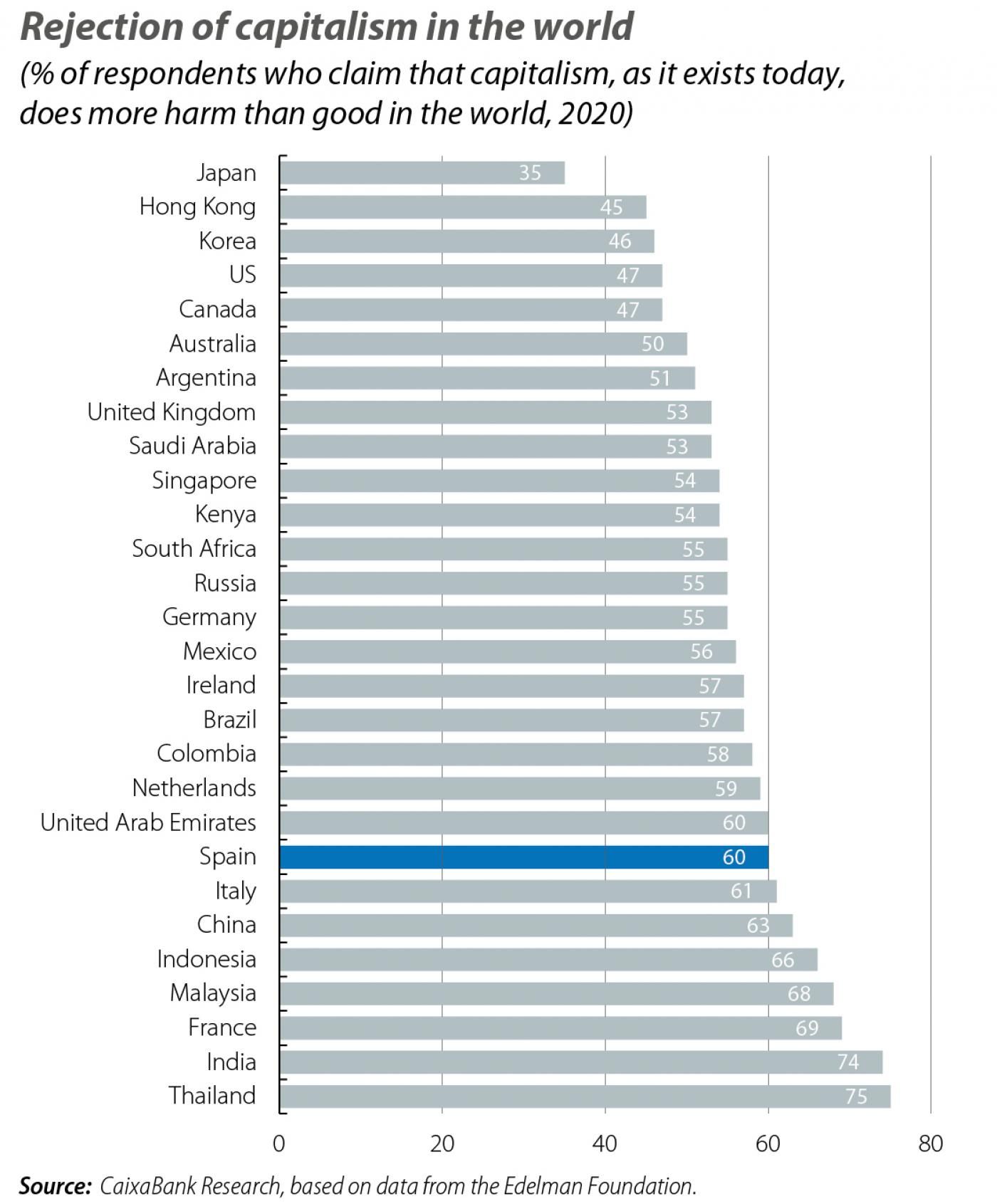 The question now is to what extent this is a recent phenomenon. This is not an easy question to answer, since most studies focus on the last two decades. One of the few exceptions is the data collected by Blasi and Kruse,3 which provide an insight into the degree of opposition to capitalism in the US since 1938. According to this exercise, the current levels of disaffection with capitalism, contrary to our tendency to view the present as an exceptional time, are not extraordinary, since its support declines in every major crisis. This was the case in the Great Depression of the 1930s, in which 38% of respondents claimed to have positions with anti-capitalist elements; in 1975, in the midst of the «oil crisis», when this percentage was 34%, and in 2010, following the Great Recession, when 40% of those interviewed stated that they had a negative view of capitalism. In boom periods, by contrast, the portion of critics of the system stood at around 20%.

Capitalism: dysfunctions and shocks are not the same thing

In short, it seems unquestionable that we are in a phase of growing disaffection with capitalism and that this disaffection is geographically widespread (even reaching the epicentre of the system, the US). It is also apparent, however, that the current phase is not so different from other peaks of disaffection in previous eras. That said, the criticisms of capitalism have taken somewhat different forms in each period in history. What forms are they taking today?

When we review the multiple debates and articles on this topic, a series of common factors begin to emerge: lower economic growth than in the past; stagnation, if not decline, in productivity; increased inequality in income and opportunity; a predominance of short-termism; an inability to internalise negative externalities (such as the environmental impact) and, finally, a certain degree of financial instability that refuses to budge.

This hotchpotch of the evils of capitalism, when presented in this way, offers few clues as to the underlying trends. If we read a little deeper into it, however, we can see that this list combines factors of a very different nature. Specifically, it includes two types of elements.

The first type consists of what we could call structural dysfunctions of capitalism. The market economy is a system which, by its very nature, has a number of characteristics that have undesirable effects. In the case of capitalism, these are the so-called market failures – exchanges for which the price mechanism fails to provide accurate information on their social benefits and costs and which require public intervention to correct them insofar as possible. This category includes the regulation of negative externalities, such as pollution. Another factor that falls within this category of structural dysfunctions would be the tendency for short-termism to predominate. The fact that there are dysfunctions inherent in capitalism is not something new – in fact, many of the institutions we have established actually strive to minimise these effects. For instance, giving the central banks independence is an attempt to respond to the short-sightedness of monetary policy makers. Similarly, the creation of a market for CO₂ emissions is intended to help internalise the social costs generated by the pollution that companies produce.

The second block of «evils» is different. When it is said that capitalism no longer works (which essentially translates as «we are not growing like we used to» and/or «it only benefits a few»), what is really happening is something quite different. In fact, the reality is that we are currently going through a historic phase of accelerated change, dominated by elements such as the technological leap, the intensification of globalisation, demographic ageing and the environmental transition. At this historic turning point, capitalism is certainly acting as an intermediary in the face of this series of shocks and trends, but it cannot be considered the ultimate cause. This does not mean that such mediation is automatic or neutral, as not all forms of capitalism are equal (and here we come to the key point of our diagnosis of the «crisis» of capitalism).

This means, for instance, that one of the main sticking points in the debate – when certain economies seem unable to reconcile economic growth and redistribution (or to combat inequality) – is not such an obvious trade off in reality, since other countries seem to have managed to find a reasonable balance.

Our thesis is that these differences between different forms of capitalism matter - and a lot. Although the defence of this thesis will be the subject of the following three articles, we would like to give our readers a little spoiler. The basic premise is that, while there are certain core characteristics that are shared by all capitalist economies, in practice there are a number of differences between countries (or, strictly speaking, between groups of countries) which end up forming a series of clearly differentiated varieties of capitalism, and these varieties work better or worse depending on the characteristics of the environment or the moment in history in question. For instance, and of particular importance in the present climate, the system’s ability to combat pandemics is not going to be the same in one variety of capitalism as it is in another.

In fact, the existence of different varieties of capitalism between different countries points towards a fundamental feature of this economic system: its capacity to adapt and evolve. In the face of criticisms from those who understand the capitalist system as something monolithic and immutable, a historical review allows us to dismiss this static view since, as we will make clear in our final article, today’s capitalism and that of 1945 present many differences. Therefore, and to convince you, dear reader, we ask you to accompany us in the following articles of the Dossier. Let us delve into this enriched view of capitalism (capitalisms, in reality) in order to better understand the causes and consequences of this complex interrelationship between global trends, economic systems and prosperity.