China: in prosperity and in adversity

The Chinese economy is transforming its productive model and is moving towards a more sustainable growth, driven by consumption and services to the detriment of investment and the manufacturing sector.1 This transformation is expected to be accompanied by a slowdown in the pace of growth. Specifically, during the period 2018-2020 we forecast an average growth rate of 6.2%, well below the 8.3% average experienced between 2008 and 2017. Although this transformation is positive, the significant macroeconomic imbalances that the country has accumulated, especially high corporate debt, could result in a hard landing for the Chinese economy. All this, of course, could have a negative impact on the rest of the world.

Two figures help to illustrate the importance of the Chinese economy at the global level. On the one hand, the greater weight of China in the global economy can be clearly seen in its significance in terms of GDP: in 1990, China’s GDP accounted for only 4% of global GDP, while in 2017 it reached 18.2%.2 On the other hand, China’s participation in global trade has also experienced a dramatic increase since 1990 (see first chart).3 The importance of the Asian giant for the global economy is indisputable.

There are many ways in which a sudden slowdown of China’s growth would affect the global economy. Below, we focus our analysis on two of them: international trade and global financial conditions. With regards to the first of them, it should be noted that China is one of the main exporting economies: in terms of manufacturing, it has been the world’s biggest exporter since 2009. In addition, China is an important purchaser at the global level: China’s imports represent over 25% of the total exports of the emerging markets. It is also worth mentioning that the commodity prices have proven to be highly sensitive to changes in the outlook for Chinese demand over the past few years.

With regards to the impact of China’s hard landing on the global financial conditions, the channel which through it would affect them is less clear. It is well known that, in financial terms, the Chinese economy remains relatively closed. Nevertheless, Chinese investment abroad has been growing significantly in recent years. Furthermore, to the extent that the growth of other economies would be affected by trade channel, it is also expected to have an impact on market confidence and global financial conditions.4

In order to determine the extent to which a more sudden slowdown in China could have a negative impact on global growth, firstly we have studied the sensitivity of international trade5 and global financial conditions6 to a negative China’s GDP growth shock. The results of the econometric analysis carried out imply that a 1 pp reduction in China’s GDP growth would lead to a 2.0 pps fall in the growth of international trade after approximately one year.7 It could also lead to a notable tightening of financial conditions, amounting to 0.2 pps of the financial conditions index analysed. We can consider as a benchmark the fact that, during cycles of interest rate rises by the Fed, the index has increased by 1.5 pps.

Given the impact that a slowdown in China would seemingly have on financial conditions and global trade, it is not surprising that the estimated impact on global growth is also significant. As shown in the rest of the charts, a shock that reduces China’s GDP growth by 1 pp would reduce GDP growth in the main emerging and developed economies by 0.5 pps.8

The analysis performed may not convince the strongest sceptics, since China’s official GDP data suffer from certain measurement problems which have cast doubt over their credibility. To overcome this limitation, we repeated the above analysis using the economic activity index developed by CaixaBank Research (for more information, see the Focus «China’s economic growth under the microscope: past, present and future»9). The results remain the same producing significant effects and impacts of a very similar size to those obtained using the official GDP data for all the variables analysed.10

5. The international trade variable is defined as the year-on-year change of total exports in real terms.

8. To calculate the GDP growth of the rest of the emerging economies, we have used a sample of 20 countries which includes the main emerging economies (in terms of size) and those with the strongest trade links with China: Argentina, Brazil, Chile, China, Colombia, India, Indonesia, Malaysia, Mexico, the Philippines, Poland, Russia, South Africa, Thailand, Turkey, Venezuela, Iran, Israel, Egypt and Peru. The weighting of each country has been adjusted according to its share of the world GDP in purchasing power parity terms. For the advanced countries, the aggregate GDP provided by the IMF was used.

10. Specifically, GDP growth is reduced by 0.4 pps and 0.5 pps in the emerging and advanced economies, respectively, two quarters after the shock occurs. 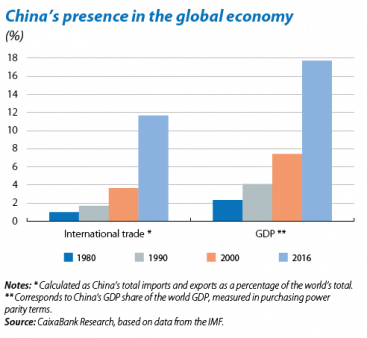 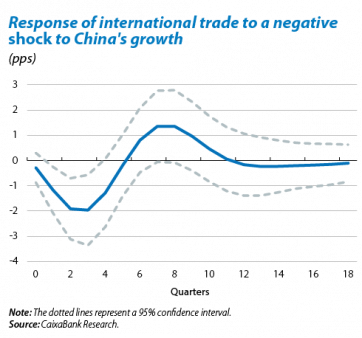 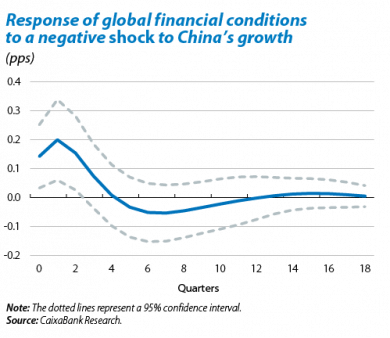 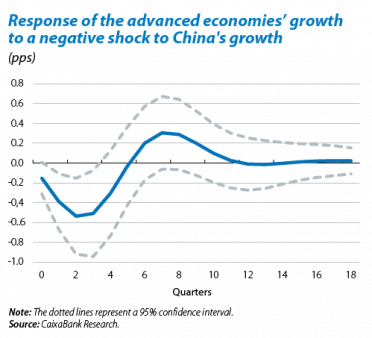 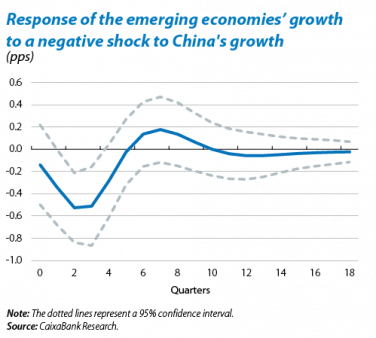