Developed economies take over from the emerging

The USA embarks on an upward trajectory while Japan's economy continues to raise doubts. Nonetheless, the biggest downside risks are centred on the emerging economies. The latest business indicators point to some improvement in China, with prices under control. In the rest of the large emerging economies, however, growth is weak and there is little room for expansionary policies. Given this situation, the expected change in the Fed's policy stance has encouraged continued capital outflows from emerging economies, particularly from those whose hefty current deficits make them overly dependent on external financing. India, Turkey, South Africa, Indonesia and Brazil are especially suffering from this exodus of capital, with huge depreciatory pressure on their currencies.

The USA is making headway along a path of modest growth and downside risks are diminishing. The world's leading economy grew by 2.5% annualized quarter-on-quarter in 2Q, more than expected. However, after a downward revision of the figures for the previous two quarters (particularly due to investment in infrastructures and public consumption), growth in 2013 is starting from a lower point than first believed. Nonetheless, we are keeping our growth forecast for the whole of the year at 1.6% given that the latest business indicators are, on the whole, surprisingly positive and point to a more vigorous second half of the year. This vigour is supported by the recovery in employment and housing, improved household wealth, a reduction in the uncertainties that marred the beginning of 2013 (the debt ceiling and sequester) and by an improved financial system. This upward path should continue in 2014, for which our forecast is 2.9% growth. June's good trade deficit figures also mean that the foreign sector is no longer a burden on growth. Downside risks can be limited to the debt ceiling negotiations, a limit that will be reached in October, and to the inventory cycle, which might reduce growth over the coming months.

The labour market has steadily improved throughout 2013. The unemployment rate fell to 7.4% in July and, in the last 4 months, 181,000 jobs per month were created on average (vs. 136,000 in June-September 2012, when the QE3 started). Should this pace continue, the Fed's target unemployment rate (6.5%) might be reached sooner than expected, by mid-2014, which is when the Fed aims to end its QE3. In any case, the recovery is still modest. The employment rate remains anchored at a low 58.7% (far from the 62.9% of January 2008) and, at the current rate of job creation, would hardly reach 61%. Hence the Fed's caution, which has stressed that it will not reduce its asset portfolio nor does it rule out lowering its unemployment target provided inflation remains subdued, with a core consumer price index, the general index without energy or food, that will more than likely remain below 2.0% in 2014.

Greater business optimism is in addition to the improved labour market while consumption has remained firm. In July, the ISM business sentiment index, both for manufacturing and services, reached levels corresponding
to GDP growth of around 4%. This, together with corporate earnings that continue to be robust and investment's room for improvement given that, to date, it has been recovering more slowly than in previous crises, suggests that investment will improve in the second half of 2013. For its part private consumption fell less than expected in 2Q, supported by improved household wealth and a savings rate that, in June, stood at 4.4% of disposable income (below the figure of 6.0% from the start of the year and thereby dispelling the scenario of excessive consumer caution that would hinder growth). The trends for retail and consumer goods and consumer confidence point to this relative vigour continuing.

Residential investment will also continue to add to growth in spite of the upswing in mortgage rates. Construction still has some way to go (new houses started in July were still 41.2% below normal levels). Support can also be found in the gradual return to household formation after the halt in the crisis, as well as a reduction in the oversupply of housing. This underlying strength can be seen in the improved index by the National Association of Home Builders (NAHB), showing the current and future trend for sales.

GDP growth was disappointing in 2Q but a breakdown by component provides some support for Abenomics.
GDP grew by 2.6% annualized quarter-on-quarter, 0.9% year-on-year, representing a minimal decrease in our growth forecast for the whole of 2013, now at 1.7%. The investment component contained all the bad figures: production investment has yet to pick up after 5 quarters of decline, public investment recovered less than expected and stock adjustment subtracted one percentage point from growth. On the other hand, key components such as private consumption and exports looked vigorous thanks to public stimuli and the weak yen, respectively.

The relatively weak growth in 2Q could delay fiscal consolidation. Public debt (238% of GDP in 2012 according
to the IMF) means that a credible path of fiscal consolidation must be established, including the planned VAT hike
(5 percentage points in April 2014), one of the lowest among rich economies. However, the relatively disappointing GDP figures, deflation that refuses to disappear entirely and industrial production that, in June, lost everything it had gained this year, are increasing the likelihood of Shinzo Abe reconsidering this tax hike, toning it down or offsetting
it with stimuli for consumption, particularly for low income groups, which supports our growth forecast for 2014
(2.0%).

The long-term success of Abenomics is still undecided, as pro-growth structural reforms have yet to be spelled out: liberalization of the agricultural sector, measures to limit excessive savings in firms, wage increases and encouragement for women to join the workforce.

Activity is picking up in China but there are still risks. Industry performed better with industrial production growing by 9.7% year-on-year in June and a preliminary PMI for manufacturing that went from 47.7 to 51.1 points in July.
The foreign sector also provided a pleasant surprise, both in exports and especially in imports, pointing to some recovery in domestic demand. Nonetheless, there are still risks resulting from high house prices as well as the indebtedness of local governments and some private sector segments, related to the rise in the non-regulated financial sector (shadow banking).

It was a disappointing 2Q for Mexico with its first decline in 4 years. GDP dropped by 0.7% quarter-on-quarter, leaving year-on-year growth at a paltry 1.5% year-on-year (0.3% adjusted for calendar effects), due largely to stagnation in industrial activity (closely linked to the US) and to public spending cuts. However, this tone should improve in the second half of the year, spurred on by the US recovery. The panorama is also encouraging in the long term as it is estimated that potential GDP growth could increase by between 2 and 2.5 percentage points thanks to the agenda of structural reforms started in 2012. Energy reform, already being debated, is expected to be particularly significant. Opening the door to private investment (hydrocarbons are currently mined exclusively by the public corporation PEMEX) aims to boost modernisation and improve oil drilling infrastructures. This will help to reduce costs and improve the future prospects of production, which has fallen considerably in the last few years but still accounts for one third of fiscal revenue. Politically, the process is unlikely to be easy as it requires changing the Constitution and dealing with an issue that is very sensitive for the country, but the pro-reform climate promoted by the «Pact for Mexico» invites optimism.

India grows by 4.4% in 2Q and Brazil by 3.3%. In spite of the pleasant surprise provided by Brazil's GDP, significant macroeconomic imbalances and the paralysis in structural reforms are still raising doubts as to the rate of growth of both countries. They also face increased financial tensions since the Fed brought forward the end of its QE3, with continued capital outflows and depreciation in the rupee and real (24% and 19% against the dollar since May). The central banks of both countries have reacted with measures to slow up this decline, including a fourth consecutive interest rate hike by Brazil, with some indications of success. 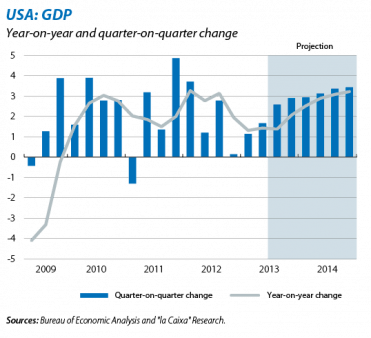 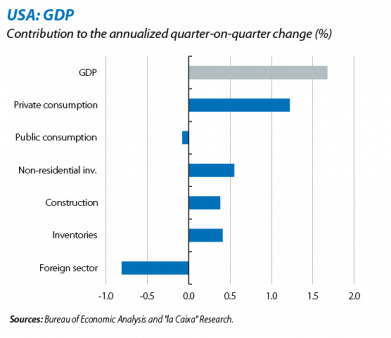 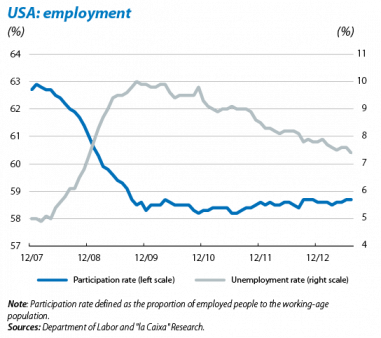 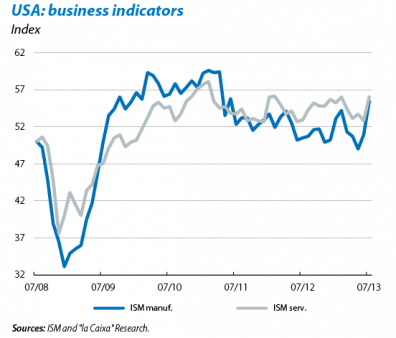 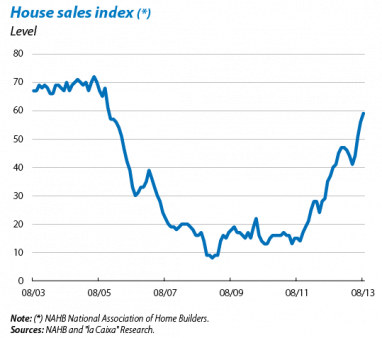 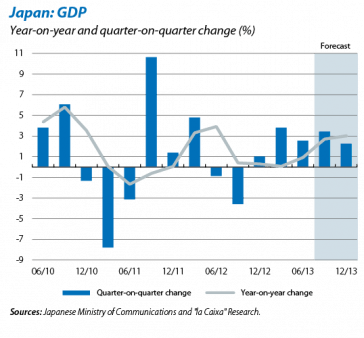 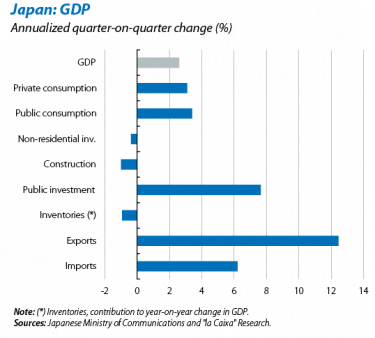 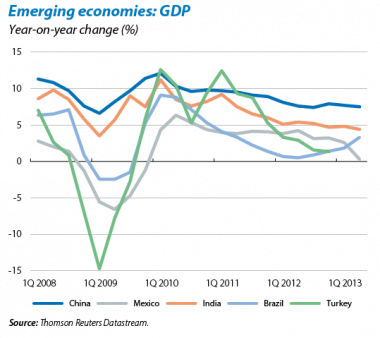 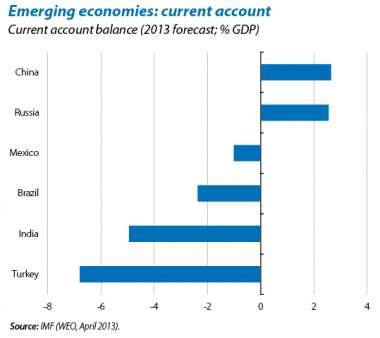