Does a country's GDP reflect its well-being?

GDP is the most prevalent way of measuring the trend in a country's economic activity. Its thorough methodology means it can be used planet-wide, making it easier to compare countries. However, although the use of GDP is common practice it is not necessarily a good indicator of a nation's well-being, a shortcoming recognised by Simon Kuznets himself, the creator of GDP in the US in the 1930s. To give an example: exploiting natural resources can boost growth at a specific point in time but at the cost of exhausting these resources and contaminating the environment, reducing the current and future well-being of a population.

Having recognised GDP's weakness as an indicator of the progress and well-being of a society, the last few years have witnessed a determined search for alternative ways of measuring this. In 2008, Nicolas Sarkozy, at that time President of France, set up a panel of experts to identify GDP's limitations both in methodological terms and also in terms of its ability to measure well-being (see www.stiglitz-sen-fitoussi.fr). The work of this commission led to the OECD's Better Life Initiative, whose aim is to develop statistical tools capable of assessing those aspects that determine people's quality of life. Other organisations such as the United Nations have also spent several years producing alternative indicators to GDP.

In general, the proposals made by the OECD and United Nations attempt to complement the assessment provided by the existing GDP indicator by including dimensions of a social or environmental nature. The OECD's Better Life Index takes 11 different aspects into account, measured using various indicators (see the first table): housing, income, jobs, community, education, environment, civic engagement, health, life satisfaction, safety and work-life balance. Another internationally used variable is the Human Development Index (HDI) which covers life expectancy, education and income level. In addition to these composite indices are two other subjective indicators based on opinion polls, one example being the percentage of individuals who report they are satisfied with their quality of life in the Eurobarometer surveys.

These measures undoubtedly provide a more complete view of a country's well-being. However, to what extend do the GDP figures differ substantially from those obtained using these other indicators? We have carried out two exercises to evaluate this. First we compared each country's gross national income per capita with its HDI. Secondly, we looked at the trend in economic growth and in the personal satisfaction indicator of the Eurobarometer in Spain.

From both procedures we can deduce that GDP is a reasonably good indicator of the progress being made by a society. In the global comparison, which includes highly diverse zones of wealth (see the graph on the left), it can be noted that rich countries are ranked in the upper sections both for per capita GDP and for the less economically-based indicator (HDI). The correlation gets weaker at the highest income levels, however, suggesting that other aspects of well-being start to take on more importance once the wealth threshold has been passed that allows the population to readily meet its basic needs. This is the situation when a combination of indices is likely to reflect a country's situation more accurately. In the second exercise (right-hand graph) we can see that, historically, GDP grows in parallel with the personal satisfaction of Spanish citizens, indicating that their happiness is related to the economic cycle. It therefore seems sensible to use GDP as a variable to measure the trend in a population's well-being.

This does not mean that an analysis of a country does not need to be broadened by using other variables in addition to GDP but it does mean that there is now less concern that such widespread use of GDP may suggest a different reality to the one provided by other well-being indicators. Moreover, it is important to bear in mind the fact that the more subjective indicators also have their own drawbacks, most notably that the perspective provided by a composite indicator depends not only on the factors it contains but also their relative weight.

This can clearly be seen in the tool provided by the OECD on its Better Life website. As mentioned above, the Better Life Index is made up of 11 sub-indices, each one based on several indicators. Once a rating has been obtained for these 11 sub-indices, they must be added together to calculate the final index, which means assigning a relative weight for each one. The choice of such weightings can strongly influence the final result and they should therefore reflect each country's reality as closely as possible. In fact, ideally, the relative weight of each sub-index should come from a representative survey of what is most important aspect for each population.

Having recognised the discretional nature of the weighting system and its effect on the final rating, the OECD provides the possibility of producing an à la carte Better Life Index; i.e. choosing the relative weightings to be applied. The second table shows how the ranking of this index varies when the relative weights are altered in four different scenarios. Assuming the 11 indicators are all equally important, Australia heads the list and Spain comes 21st out of 36. The order changes, however, if the work-life balance is the most important, with Denmark coming first and Spain climbing to 15th. This simple exercise reveals to what extent such indices are at the mercy of subjectivity, reducing their potential.

In short, GDP is a limited tool when evaluating the well-being of a country and this has led to complementary tools being investigated. However, in general the results do not differ significantly from those provided by GDP figures. Moreover, the subjectivity of these new measures still represents a drawback at present. In the absence of better statistical formulas, GDP, albeit with some qualifications, is still an acceptable way to measure quality of life in different parts of the world. 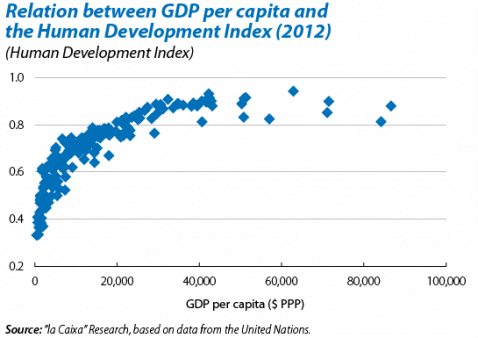 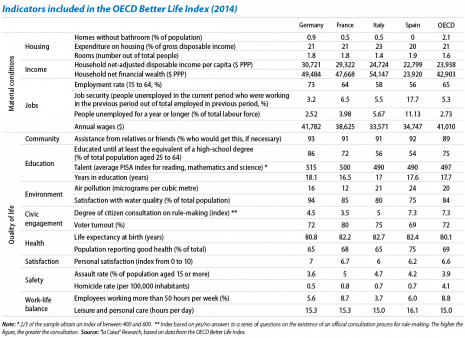 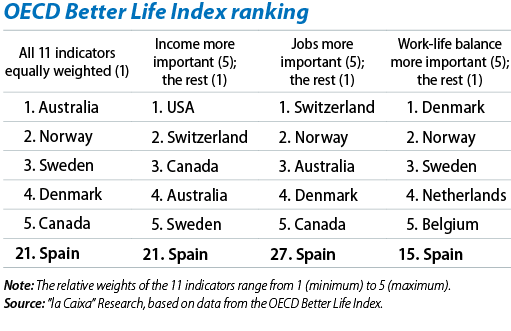