Growing confidence in a sustained recovery. The European Commission (EC) has joined in the widespread improvement for Spain's growth prospects in 2014 and 2015. The favourable progress made by economic indicators over the last few months and advances in correcting the main imbalances accumulated during the pre-crisis years have helped to usher in a phase of greater optimism. The improvement in activity is starting to have an effect on the labour market, leading the EC to also raise its job creation forecast. Improved consumer and business sentiment points to domestic demand lying behind the recent energy seen in the Spanish economy. Although the role played by the foreign sector will still be decisive, this boost from consumption and investment will ensure more balanced growth.

The revival in domestic demand is confirmed. According to the INE, quarter-on-quarter growth in GDP was 0.4% in Q1 this year (0.2% in 2013 Q3). The year-on-year rate stood at 0.5%, 0.1 p.p. below the initial estimate. Flash figures for consumption and investment had already pointed to more dynamic domestic demand in the first few months of the year and the INE's estimates have endorsed this theory. In fact, domestic demand's contribution to aggregate growth was 0.7 p.p. in 2014 Q1 while exports deducted 0.2 p.p. from the year-on-year rate of change in GDP. This has therefore interrupted the trend of the last few quarters in which the foreign sector was the only pillar supporting the recovery. The improvement in consumer confidence to –6.7 points in May, a notably higher figure than the historical average, suggests that private consumption will continue to be a decisive factor in the economy's recovery in 2014 Q2. However, a further decline in salaries during 2014 Q1 indicates that private consumption is unlikely to go on growing at the same pace (0.5% quarter-on-quarter on average since 2013 Q3). One favourable aspect in the breakdown of growth in 2014 Q1 has been the important role played by investment in capital goods. The growing profits of Spanish firms will probably help to maintain the solid growth in investment in capital goods recorded since the beginning of 2013.

Economic activity is progressing apace. The initial indicators for Q2 are encouraging and point to the rate of GDP growth being similar to that of 2014 Q1 or even higher. April's composite PMI rose to 56.3 points. Of note is the sharp increase in the services sector index, reaching 56.5 points, a level it has not seen since 2007. Industrial production is expected to continue its recent upward trend judging by March's 3.1% increase in industrial orders year-on-year as a whole, and 19.5% for capital goods in particular. This once again suggests that investment will become more important for the economy's recovery.

April's figures confirm the recovery in the labour market. The number of registered workers affiliated to Social Security grew for the eighth consecutive month, specifically by 61,111 people, seasonally adjusted. The rise seen by employment in the services sector was particularly high, even discounting the positive effect of the Easter holidays. The figures from the National Accounts system also show that the labour market created employment in 2014 Q1, up by 0.1% quarter-on-quarter in terms of full-time equivalent jobs, offsetting the somewhat disappointing figures provided by the LFS for this quarter. The employment expectations over the next three months stated in the European Commission's opinion polls point to this growth in the labour market accelerating slightly. This upward trend is especially evident in the services sector whose average for April and May is higher than the figure for 2014 Q1. This better performance by the labour market should boost consumption, leading us to believe that the risk of deflation is limited in spite of the low inflation rates (0.2% in April according to the advance by the INE). Nonetheless, the debate regarding deflation will continue in the short term because the inflation rate will remain low.

The real estate sector is entering a stabilisation phase. Improved performance by the labour market and reduced uncertainty in the economic environment are helping the real estate market to put an end to its phase of contraction in which prices and sales plummeted. The figures are showing the first few signs of recovery in housing demand as the number of sales increased by 22.8% year-on-year in March, putting an end to ten months of consecutive declines. This high growth is partly due to the little demand for housing during the first few months of 2013 after the end of tax incentives to buy real estate. Nonetheless, the sustained improvement in the index for the intention to buy housing points to demand picking up over the coming months. Regarding the trend in house prices, their rate of contraction slowed up in 2014 Q1 to –0.5% quarter-on-quarter (compared with –1.9% quarter-on-quarter in the previous quarter). Since the peak, reached in March 2008, house prices have accumulated a drop of 37.2% in real terms. The correction in the real estate sector is coming close to its completion.

The sustainability of the trade surplus is called into question. The growing strength in domestic demand has led to a notable upswing in imports in real terms in 2014 Q1 (12.7% compared with 3.0% for exports), according to data from the Customs Department. If this big reaction by imports to growing domestic demand continues, it could end up reducing the foreign sector's contribution to growth and undo the trade surplus achieved. Nevertheless, part of this upswing in imports is due to temporary factors such as the significant rise in automobile sales in the last few months boosted by the PIVE subsidy plan and the regeneration of stocks due to the improved economic outlook, so that we still believe the trade surplus will continue to improve in the medium term.

Private sector deleveraging continues. Among the different imbalances amassed by the Spanish economy before the recession, high household debt is perhaps one of the most difficult to correct. One of the consequences of this debt during the crisis was the rise in non-performing loans. In this respect, the most recent figures give cause for optimism as they show an NPL rate that is gradually falling away from its peak reached in December 2013. In March, the rate of contraction for non-performing loans, namely 13.4%, was halted by a higher fall in the credit balance (–7.6% compared with –6.7% in February). Nonetheless, we expect the trend observed at the beginning of year to continue, leading to further reductions in non-performing loans. On the other hand, the increase in new loans being granted to SMEs is also favourable. Although the level is still low, it is notable that this was 5.3% higher in 2014 Q1 than the same quarter a year ago.

Fiscal consolidation efforts must go on. One of the factors that will determine whether the public deficit target is achieved, which the government has set at 5.5% of GDP for this year, will be the progress made in revenue. The figures for tax revenue show a positive trend although this is largely due to regulatory changes affecting the different types of taxation. Over the next few months, in addition to the possible reforms that may be carried out to the tax system, the recovery in economic activity is also expected to boost revenue. At the same time, the government must continue to closely monitor trends in public spending. One positive fact in this respect is that current expenditure between January and March 2014 was 9.06% of GDP, almost 0.2 percentage points lower than the figure for the same period one year ago. Public expenditure is expected to continue along the same lines for what remains of the year, so its contribution to growth will be limited.

The main recommendations by the IMF: tax reform and encouraging the restructuring of private debt. According to this institution, an adjustment in accounts should be accompanied by an increase in tax revenue by raising special and environmental taxes and gradually reducing the preferential VAT treatment enjoyed by some goods. The IMF also suggests lowering Social Security contributions for employing low-skilled workers, reducing exceptions, special income tax regimes and corporate tax. With regard to the financial sector, the IMF recommends that banks continue to improve their capital and limit payouts of cash dividends in order to revive credit (albeit admitting exceptions depending on the solvency and expected margins for banks). Similarly, in order to keep companies operationally viable, the IMF recommends that the Tax Department and Social Security should also be involved in restructuring corporate debt and that banks should promote a personal bankruptcy scheme to offer small businesses a fresh start. In spite of the reforms made over the last few years, the homework set by the IMF is still long and comprehensive. All this should help to improve Spain's business competitiveness, which is at a very low level according to international rankings. 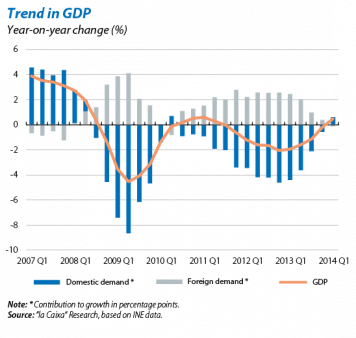 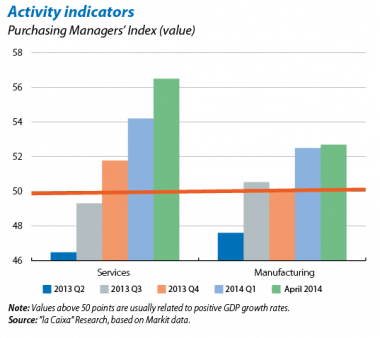 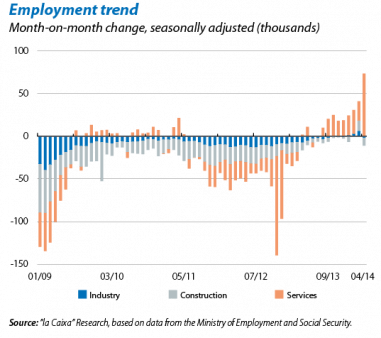