The periphery of the euro area has received both good and bad news in the latest report on macroeconomic imbalances published by the European Commission. On a positive note, Spain no longer belongs of the group of countries with excessive imbalances. The adjustment process carried out by Spain's banking sector and the correction of its current account deficit are two of the examples used by the EC to demonstrate the rebalancing of the Spanish economy. On the other hand, Italy has replaced Spain on the «blacklist», sharing this role with Croatia and Slovenia.

Since 1990 the trend in Italy's economic activity has been worse than that of the euro area as a whole. The EC points to heavy public borrowing and persistent losses of competitiveness as the main burdens on the economy. Regarding the former, public debt stood at 132.9% of GDP in 2013 Q3, a level that forces the Italian public administration to allocate 5% of its annual GDP to paying interest on its debt, keeping its sovereign debt rating at a lower level than that of the rest of the developed countries, eventually affecting the financing costs of Italian firms.

The country's loss of competitiveness is equally worrying as it jeopardises its capacity to grow in the medium and long term. As an example, we can look at the trend in unit labour costs compared with its main trading partners, one of the key determining factors of a country's competitiveness: since 2000 these have increased by 51% while the rise has merely been 24% in the euro area as a whole.

The decline in market share of Italian exports worldwide is one of the main consequences of the aforementioned loss of competitiveness. Since 2000, this market share has shrunk by 27.6% while the reduction has been 16.5% for the whole of the euro area. A highly significant part of the goods exported by Italy consists of products with an intensive use of low-skilled labour, making them more vulnerable to competition from emerging countries. Specifically, 35% of its exports of manufactured goods are low-skilled labour-intensive compared with 22% in the case of the euro area. Most European countries have taken advantage of the last few years to redirect their production towards goods that require a higher qualified workforce. For example, this kind of product has gone from accounting for 20% of Italy's total exports of manufactured goods in 2007 to 24% in 2012. For the euro area as a whole, however, this increase has been from 36% to 38%.

The challenge facing Italy's economy in the future is not minor. According to the EC's report, in order to regain a similar growth rate to that of its European neighbours, Italy must carry out an extensive and far-reaching agenda of reforms that includes all the key elements for the economy to function properly: from the labour market to the judicial system and public administration. The new government, led by Matteo Renzi, seems to have taken this to heart and has included in its agenda many of the reforms mentioned by the EC, such as reforming electoral legislation, which should provide greater political stability. However, given what has happened with previous governments, there is reason for caution. 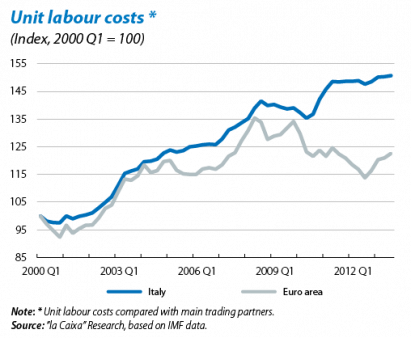 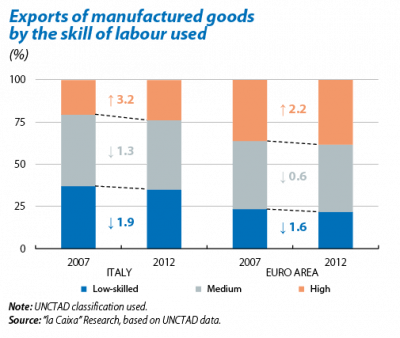