The economic indicators suggest moderate growth at the beginning of 2019

Portugal: in a more mature phase of the cycle

The economy grew by 2.1% in 2018 and confirmed its entry into a more mature phase of the cycle. The data relating to the last quarter of 2018 indicate that GDP grew by 0.4% quarter-on-quarter and by 1.7% year-on-year in Q4. This growth was backed by the strength of domestic demand, which benefited from the good performance of both private consumption and investment. The contribution from external demand, meanwhile, was more negative due to the obstacles that exports endured at the end of the year (namely, strikes by dockworkers and the depletion of stocks in the automotive sector). With regard to Q1 2019, the indicators are generally positive, but give some mixed signals. On the one hand, the Bank of Portugal’s coincident economic activity indices, which have a strong correlation with GDP growth and that of private consumption, suggest that economic activity continues to grow at a rate similar to that of the previous quarter. In particular, both the coincident economic activity indicator and that of private consumption stood at 1.8% in January (1.7% and 1.9% on average in Q4 2018, respectively). On the other hand, the consumer and industry confidence indices continued to decline in January and reflect greater caution among firms and households towards the future performance of economic activity. On the whole, the indicators remain at encouraging levels and suggest a steady growth rate in 2019 (1.8% according to CaixaBank Research’s forecast).

Tourism of non-residents stabilised in 2018. Tourist activity showed some signs of slowdown during the last year, with an increase of just 0.4% in the number of non-resident guests in the accommodation sector for 2018 as a whole. However, the average income per available room has continued to rise, suggesting that the quality of the country’s tourist services is also improving.

The real estate sector shows signs of slowing down. The end of 2018 brought the first indications of a possible slowdown in the Portuguese real estate market, with the latest data suggesting a slowdown in the demand for housing. In particular, in December the sector’s confidence indicator, which reflects the expectations of property developers and agents regarding trends in prices and transactions, registered a significant drop, potentially indicating a cooling of the market over the coming months. Nevertheless, the latest figures for home sales remain high.

The foreign sector went back into deficit in 2018. In particular, in December the current account balance stood at –0.6% of GDP (12-month cumulative balance), which marks a clear decline in the foreign sector in 2018 compared to the 0.5% surplus registered in 2017. Although the return to a deficit position is not good news, there are factors that suggest that the extent of the deterioration can be contained. On the one hand, as has already been discussed, exports of goods endured the negative impact of temporary factors at the end of the year. Imports, on the other hand, grew by an extraordinary 8.0%, driven by a surge in imports of investment goods (providing a contribution of +5.2 pps to the total growth of imports). By contrast, imports of consumer goods and fuels performed more moderately (with a contribution of 1.6 pps and 1.3 pps, respectively). The balance of services, meanwhile, continues to maintain a notable surplus (8.3% of GDP in 2018) thanks to the strength of tourism, although this sector also shows signs of slowing down. As for 2019, the deterioration in the current account balance is expected to stabilise and the economy is expected to maintain its external lending capacity, since the capital account continues to exhibit a surplus which more than offsets the current account deficit.

The labour market maintained a good tone in the closing stages of 2018. In Q4 2018, the number of people employed increased by 78,100 compared to Q4 2017 and the total population in employment stood at 4,883,000. The pace of job creation slowed to 1.6% year-on-year (+3.5% in Q4 2017), with a prominent role played by the public administration and education sectors. On the other hand, the unemployed population decreased by a considerable 17.3% year-on-year in Q4 2018 and the unemployment rate stabilised at 6.7% for the third consecutive quarter. Together, these figures indicate that the labour market is entering a more mature phase of the cycle. As such, with the economy having reached its current levels, job creation and the reduction in unemployment are expected to lose some steam over the course of 2019.

The contraction of private sector lending moderated in 2018. Lending to individuals contracted by 0.6% in December 2018, as a result of the reduction in lending for housing. This trend occurred in a context in which new lending operations grew significantly in 2018 (19.6% year-on-year, despite the 41.4% year-on-year slowdown compared to the previous year). On the other hand, consumer lending continued to grow steadily, registering growth of 10.5% year-on-year in December. As for companies, sales of nonperforming loans continued to have a negative impact on the volume of credit: in fact, the stock of credit fell by 4.6% year-on-year in December 2018, but it would have grown by 1.7% if we had excluded this effect. However, this trend is expected to continue in 2019, as the banking sector continues to sell off portfolios of nonperforming loans to clean up its balance sheets. 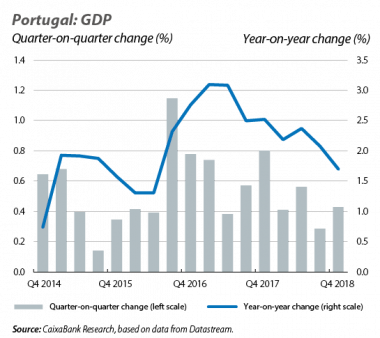 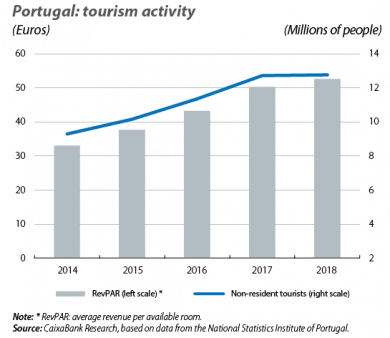 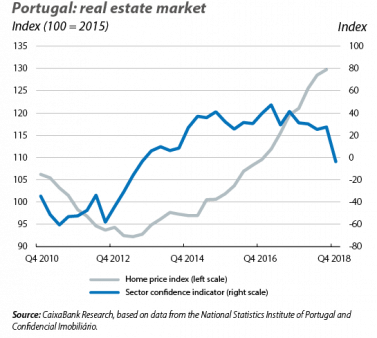