Extreme poverty: are its days numbered?

Mahatma Gandhi said «poverty is the worst form of violence » and the 189 members the United Nations have taken good note of this. In the year 2000, they set as the first and main goal of the Millennium Declaration to eradicate extreme poverty and hunger in the World. The severity and length of the economic crisis have undoubtedly slowed up this crusade but progress is still being made.

According to the latest World Bank data, 1.3 billion citizens of emerging or developing countries are still in a situation of extreme poverty (surviving on less than 1.25 dollars per day).(1) Although this figure is alarming, the improvement recorded since the early 1980s has been considerable: 600 million people have passed the 1.25 dollars per day barrier and the ratio of incidence for extreme poverty (as a percentage of the total world population) has gone from 42% to 19%. This improvement, however, has not been widespread among all countries.

South East Asia, with China at its head, has seen an extraordinary reduction in its poverty rate from 80% to 14%. In clear contrast, Sub-Saharan Africa has not managed to get its rate below 50%.(2) This uneven progress has radically changed the world's poverty map. At the beginning of the 1980s, South East Asia had the largest number of poor (1.1 billion) and the highest ratio of extreme poverty (77%); this was followed, far behind, by Southern Asia with 568 million poor, mostly in India, and with a ratio of 61%; and, further still, by Sub-Saharan Africa and Latin America, with 205 and 178 million poor, respectively, and both with ratios of around 50%. Thirty years later, Southern Asia and Sub-Saharan Africa are the regions that have come out the worst, leading the ranking with 571 and 386 million people below the poverty threshold, respectively; South East Asia, with 284 million people in extreme poverty, has fallen to third place while Latin America remains fourth in this grim ranking, as well as improving its incidence rate from 51% to 31%.

Nonetheless, it is necessary to qualify this picture. With a population that is growing relentlessly, the achievements seen in Southern Asia have been greater than what might be suggested by the absolute figures: in relation to its total population, its poverty rate has fallen by 25 percentage points to 36%. Similarly, with regard to the apparent failure of the Sub-Saharan region, although this cannot be qualified due to demographic growth it can be qualified by a significant change in trend since the mid-1990s which looks promising.(3)

In any case, in this war against poverty there is no doubt that any action taken by the emerging trio of China-India-Brazil, which account for close to 50% of the world's poorest people, is of vital importance. So far, the main region behind the victories achieved has been China: in three decades, it has divided its number of «extreme poor» by five (to 170 million), going from a rate of 84% in 1981 to 13% by the end of the first decade of the new millennium, equivalent to a 6.7% annual reduction. The main driving force behind this correction is clearly the reforms implemented during the 1980s in the agricultural sector which employed 71% of the workforce and the huge impact these had on productivity and economic growth by liberalizing the price system and reorganizing the commune regime.

At the other end of the world, and over the same period of time, Brazil has halved its number of poor (to 12 million) and has pushed its poverty rate down to 6% (an average fall of 3.6% annually). Within an environment of much lower growth than China, these improvements have been achieved via greater macroeconomic stability and redistribution programmes aimed at the poorest, which have been hugely effective. These include direct transfer programmes, such as the well-known Bolsa Familia («Family Bag») or the most recent «Brazil without misery» announced by President Dilma Roussef in June 2011, which aims to benefit 16 million Brazilians.

With regard to India, the World Bank's figures indicate that its incidence ratio has fallen from 60% to 33%, equivalent to an average annual improvement of 2.1%, more moderate than in China or Brazil but still significant. The Indian assault on poverty combines Chinese and Brazilian weaponry: like China, it has benefitted from a high growth rate and agricultural reforms; like Brazil, it has resorted to direct aid programmes to relieve those in a precarious situation, although with less success than its Amazonian peer, due largely to the aid being allocated inefficiently.

The extraordinary progress made in terms of extreme poverty has been, to some extent, marred by a rise in income inequality, especially in India and China. This constitutes a «relative worsening» of the poorest compared to the rest and reflects another dimension of poverty: their relative position within a society. In any case, in the poorest countries, where a significant proportion of the population still cannot meet their basic needs, a reduction in extreme poverty is a priority.

In short, in spite of regional disparities, the number of «extreme poor» and the poverty rate have fallen enormously over the last thirty years thanks largely to the accomplishments of China, Brazil and India. But the finishing line is still very far away. Reaching this target means resorting to measures that offer the greatest guarantees: economic growth and an effective system of redistribution. Key ingredients for a highly commendable aim: to continue fighting to eradicate poverty; a war that must not be lost.

(1) A person is considered to be living in extreme poverty when their income means they can't afford a basic basket of goods and services. The World Bank sets the extreme poverty line at 1.25 dollars a day based on purchasing power parity. This is the measurement that is equivalent to the previously used poverty line of one dollar a day in purchasing power parity terms. See Box 1 for a detailed explanation of poverty measures.

(2) Most of the data come from the World Bank and from various studies by Martin Ravallion (former director of the World Bank's Development Research Group) with different co-authors. 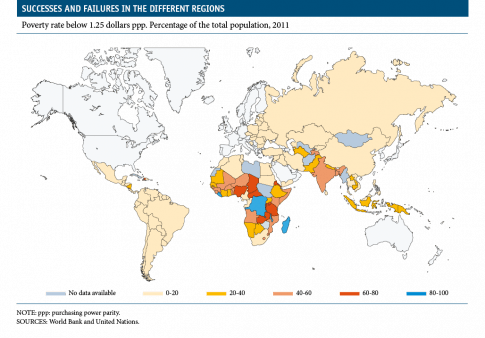