The Spanish economy ended 2014 Q1 with figures that encourage optimism. Available indicators for the first few months of the year point to the rate of growth accelerating. This was the case of "la Caixa" Research's economic activity index, which places quarter-on-quarter growth in GDP between 0.3% and 0.6% in 2014 Q1, above the figure of 0.2% recorded in 2013 Q4. Our forecast of 0.3% remains within an acceptable range of probabilities but the final figure looks like it might be a little higher. In fact, most institutions have recently revised their growth forecasts upwards. The Bank of Spain, for example, has increased its GDP growth forecast for 2014 by 0.6 percentage points, up to 1.2%, and has placed 2015's growth at 1.7%. Moreover, the map of risks is also moving towards more benign territory. This was the conclusion of the latest report on macroeconomic imbalances published by the European Commission, highlighting the significant advances that have been made by the Spanish economy in correcting its main imbalances. Although there is still a long way to go, this places the country in a more advantageous position to ensure the recovery steadily picks up steam throughout the year.

Investment is making up the ground it lost. Already in 2013, growth in investment in capital goods was surprisingly high, with a year-on-year growth rate that ended the year at 9.6%. In the first few months of 2014, the figures for industrial activity have not disappointed and both the PMI manufacturing index and the industrial production index have continued to post significant progress. All this is reflected in the good performance by the composite index of investment in capital goods in Q1. In turn, this dynamism is resulting in an increase in production capacity utilization for manufacturing, which in 2014 Q1 reached 75.5%, coming ever closer to its historical average of 80%.

Household consumption falters after a burst at the end of 2013. Although during the second half of 2013 household consumption provided a pleasant surprise with 0.5% quarter-on-quarter growth in Q3 and Q4, its rate of growth seems to have eased in the first few months of 2014. This is suggested by the trend in retail and consumer goods, which slowed up their rate of growth to 0.3% year-on-year during the first two months of the year compared with the figure of 0.9% posted between September and December 2013. This contrasts with the good performance by consumer confidence, in March reaching heights it had not seen since 2004. In fact, underlying factors such as the labour market trend are still pointing to a recovery in household consumption, so this slowdown in retail and consumer goods should be interpreted as a temporary phenomenon.

Job creation intensifies. The improvement in household consumption is largely in response to a change in trend in the labour market. By way of example, in seasonally adjusted terms there have been positive net job creation rates for the last six months. The services sector, which employs more than 75% of workers, is still the driving force in the labour market although clear signs can also be seen of improvement in the industrial sector. Similarly, the incipient revival in the labour market is reflected in the number of new employment contracts. As is customary, in the initial phase of a recovery most of these new contracts are temporary. In the first two months of 2014, these grew by 15.8% year-on-year, compared with a 2.1% increase in permanent contracts. However, such differences could diminish over the next few months with the coming into force of new incentives for permanent employment contracts promoted by the government.

Wage adjustment remains stable in 2013 Q4. Gains in competitiveness have been key to boosting the internationalisation of the Spanish economy over the last few years. This has contributed to the fact that, in just five years, exports of goods and services have gone from accounting for 27% of GDP to 34%. The recent trend in labour costs suggests that gains in competitiveness are consolidating (in 2013 Q4 they fell by 0.3% quarter-on-quarter). However, the rate of growth in labour costs in the rest of the euro area countries has also moderated in the last few months, for the moment halting any further gains in competitiveness. The trend in inflation in Spain and the euro area is a good reflection of this. In Spain it remains at a very low level: in March it decreased by 0.2 percentage points and stood in negative terrain, specifically –0.2%. This latest drop is partly due to predictable, temporary factors such as the year-on-year decrease in tourism prices, taking into account the fact that Easter falls in April this year. However, as the recovery consolidates in domestic demand, inflation should start to move upwards. Nevertheless, the differential compared with inflation in the rest of the euro area stands at 0.7 p.p.: there inflation was 0.5% in March and no significant upswing is expected.

The change in trend is confirmed for granting new loans to firms and households. February's figures show an increase both in the granting of loans to SMEs (6.0% year-on-year) and for household consumption (6.3%). This upswing, although moderate, is helping to slow up the fall in the stock of credit, which went from 9.8% in January to 9.7% in February (without taking into account the methodological change introduced recently, which includes loans granted to financial credit establishments). However, a breakdown of the credit balance at the end of 2013 shows significant differences between different business sectors. Of note is the trend in credit to the services sector which, in 2013 Q4, only fell by 0.4% quarter-on-quarter compared with 4.4% for construction credit.

Exports of goods are picking up, and so are imports. Although over the last few months the volume of exports grew in fits and starts, the outlook is still favourable, particularly supported by the good performance shown by demand from countries in the euro area. This good performance by the foreign sector is also reflected in the increase in the number of Spanish firms that export, which has gone from 97,100 in 2007 to 151,000 in 2013. However, unlike in previous years, the recovery in imports will slow up the foreign sector's contribution to GDP growth. January's trade flows help to illustrate this new scenario. During this month, exports of goods in real terms rose by 5.4% year-on-year, a figure slightly lower than that of 2013. January's growth in imports, however, stood at 6.5%, close to double its average growth recorded in 2013.

The public sector ended 2013 with a deficit of 6.6% of GDP, 0.1 percentage points above its target. In the end, 2013's fiscal balance only deviated slightly from the target set by the European Commission. The notable contraction in public consumption in 2013 Q4, namely 16.3% year-on-year, intensified the adjustment in the balance over the last few months of the year and reduced the final deficit to 6.6% of GDP. If we take into account the losses due to the bank restructuring, this figure rises to 7.1%. In any case, although the correction of just 0.2 percentage points (6.8%) with regard to 2012's deficit may seem small, it is important to remember that part of the deficit adjustment in 2012 (approximately 1% of GDP) was achieved by adopting temporary measures that consolidated in 2013. A breakdown in the balance of the different administrations does not provide any particular surprises either: the autonomous communities and central government did not achieve their deficit targets set by the EC, of 1.3% and 3.8% of GDP, respectively. On the other hand, local government corporations and Social Security met their limits, helping to offset part of the deviation by the rest of the administrations. With a view to 2014, the new deficit target established an adjustment in the fiscal balance of 0.8 percentage points, down to 5.8% of GDP. This correction seems achievable given the budget plans presented by the different administrations.

The government continues to take measures to guarantee sustained growth in the medium and long term. In March it approved a Royal Decree-Law in order to avoid the closure of viable firms that nonetheless have problems of liquidity and a high financial burden (see the Focus «Royal Decree Law 4/2014: incentives for restructuring corporate debt» in this Monthly Report for a more exhaustive analysis). Similarly, in March it also presented the expert report that should set the pattern for tax reform, expected before the summer and which should come into force as from 2015. The aim of this reform is to establish an efficient fiscal framework that helps to adjust the public deficit and stimulates growth. Broadly speaking, the report suggests reducing Social Security contributions and, in exchange, increasing indirect taxation and modifying direct taxation, simplifying it and widening the taxable bases. 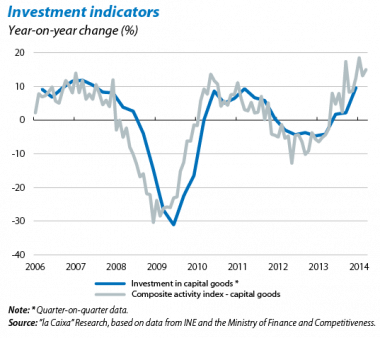 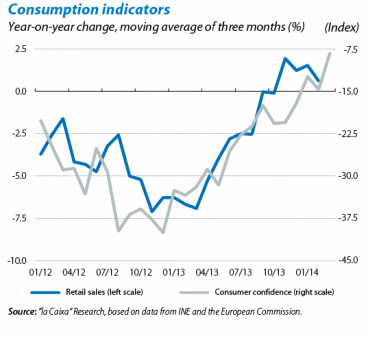 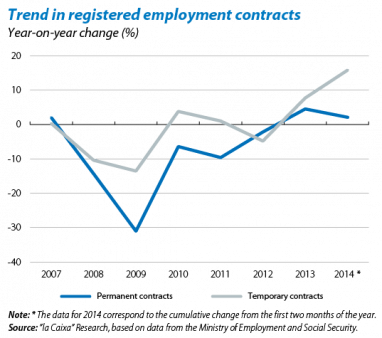 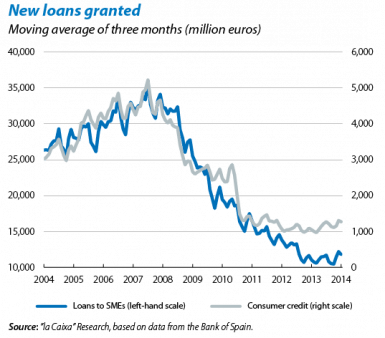 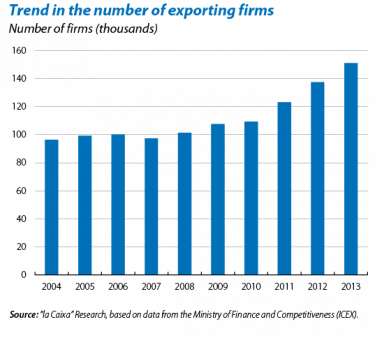 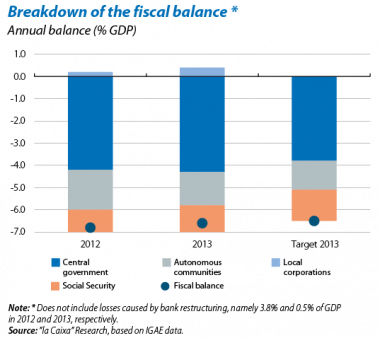 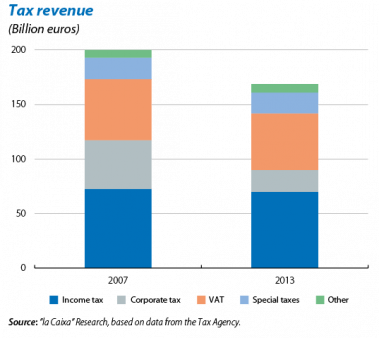