Germany: why is the European locomotive losing steam?

• The German economy is likely to go into recession this quarter due to the shock of global uncertainty, which is eroding its foreign sector, and due to the crisis in the automotive sector.

• The slowdown in GDP growth of Germany’s main trading partners accounts for 70% of the decline in its exports and a third of the fall in its industrial production.

• Germany has been more affected than its European neighbours by the slowdown in international trade, as its economy is more open and more integrated into global supply chains.

After growing by a considerable 2.8% in 2017, Germany slowed down sharply in 2018, and over the past four quarters year-on-year growth has been a meagre 0.8% on average. In fact, in Q2 growth was negative and all the indicators suggest that this trend has continued in Q3, which would technically mean that the country has entered into a recession. Below we discuss why.

The cooling of the German economy

Two adverse shocks, one global and another sectoral, have hit the German economy:

• The increase in uncertainty at the global level (as a result of the trade conflict between the US and China, but also due to tensions in Europe such as Brexit and frictions between Italy and the European Commission) has led to a slowdown in international trade that has stunted German exports (they have featured a slowdown of 3.0 pps on average in the last four quarters compared to the first half of 2018). Moreover, the manufacturing sector has suffered a considerable slowdown, largely due to its high dependency on the foreign sector (59% of German production is exported, according to data from the OECD), leaving it more exposed to changes in the global manufacturing cycle.

• The sensitivity of Germany’s foreign and industrial sectors to global demand is well illustrated by the fact that the growth in exports and industrial production began to decline coinciding with the slowdown in the growth of its key trading partners and have followed a similar trend (see second chart). In fact, the slowdown in GDP growth of its main trading partners accounts for 70% of the decline in its exports and a third of the fall in its industrial production.

• When we analyse Germany’s exports to its main trading partners in the current year (see third chart), we see that the most notable contractions have been in two economies particularly affected by the high uncertainty: the United Kingdom and Italy.1 In the case of the United Kingdom, the accumulation of inventories in Q1 to cope with a potential no-deal Brexit explains the 20% year-on-year fall in German exports seen in April and May.

• At the same time, another shock has affected the automotive sector, which represents 5% of Germany’s GDP and is the manufacturing sector that is most interconnected with the rest of the economy. Specifically, there have been production cuts in order to adapt to the new EU vehicle emissions regulations that came into force in September 2018, coupled with a decrease in the global demand for cars (largely due to a «wait and see» attitude among consumers, driven by regulatory uncertainty and the expectation of a reduction in the cost of hybrid and electric cars thanks to technological advances). These shocks have caused a significant drop both in vehicle production and in exports of German cars, which represent 11% of Germany’s total exports, well above most euro area economies.

• Consumption and investment, meanwhile, have shown signs of slowing down in recent quarters, albeit at a much more moderate rate than the foreign sector (for instance, private consumption grew by 0.3% quarter-on-quarter in the first two quarters of 2019, versus 0.4% in 2017-2018; investment grew by 0.4% in the first half of 2019 versus 1.0% in 2017-2018). Thus, although domestic demand remains resilient thanks to the buoyancy of the labour market and accommodative financial conditions,
if these shocks persist for longer than expected, we could begin to see a more pronounced slowdown in these components.

• Germany is a much more open economy than the rest of the major European economies and it is more integrated into global supply chains. Therefore, global uncertainty affects it to a greater extent. The historical evidence shows that the degree of sensitivity of exports to a global uncertainty shock of a similar magnitude to the one seen in recent months is far greater in Germany than in other economies such as France, Spain or Portugal. The results show that the negative impact is much greater on German exports and this is the only case in which the impact is significant (see fourth chart).

• Another, somewhat more subtle factor is the fact that Germany is in a more mature phase of the expansionary cycle, so its growth was potentially going to moderate in any case. Some labour market indicators support this vision: for instance, the vacancies ratio2 which shows the degree of tightening in the labour market, is much higher in Germany (3.3%) than in countries such as France (1.3%), Italy (1.2%), Spain (0.9%) or Portugal (1.0%). Another sign of the maturity of the cycle is wage growth, which is more pronounced in Germany (standing at 3.2% in Q2 2019, compared to 2.7% for the euro area as a whole).

• The uncertainty surrounding geopolitical conflicts is unlikely to dissipate in the short term. Therefore, in all likelihood the German economy will continue to show weakness in the remainder of the year. One factor to keep in mind is that, according to our forecasts, the growth of Germany’s trading partners will stabilise, which could lead to a modest rebound in exports in the coming quarters.

• The relative resilience of domestic demand and the strength of a labour market with full employment (the unemployment rate is at an all-time low of 3.0%) suggest that, if the uncertainty is mitigated, Germany will recover its dynamism from 2020 onwards.

• The key will lie in how persistent the factors affecting the foreign and manufacturing sectors prove to be: if they get more protracted than expected, the supporting economic factors could be eroded. In this regard, some of the signs already coming from the labour market must not fall on deaf ears: according to the Munich Economic Institute for Research (IFO), 8.5% of manufacturing companies have cut their staff working hours in recent months, while the hiring intentions index is at its lowest level since 2013.

• If necessary, Germany has enough fiscal space to implement a significant stimulus (according to the Minister of Finance, such a stimulus could amount to 50 billion euros, representing 1.4% of GDP). With a fiscal balance that could close 2019 with a surplus of around 1.0% of GDP, Germany can afford to make investments to support not only short-term growth but also the economy’s competitiveness in the medium and long term. This could be achieved, for instance, by making improvements in key infrastructure and supporting the energy transition in the industrial sector with a focus on the automotive industry.

1. In the case of Spain, the slowdown in the automotive sector, following regulatory changes, is the main cause: 20% of German exports to Spain are cars (and car components), which have fallen by 9.3% year-on-year in the period January to June.

2. The vacancy ratio measures the fraction of the total number of jobs in the economy that are vacant (i.e. that have been created recently or remain unfilled, leaving the employer to conduct an active search to fill them immediately or in a specific time frame). A higher ratio indicates that firms are experiencing greater difficulties in filling their vacancies, which suggests greater tightening in the labour market (for example, if the labour market is in full employment or if there are structural imbalances making it difficult to match demand with supply). 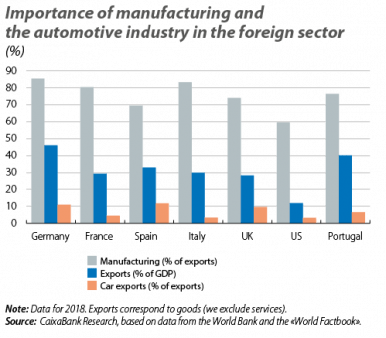 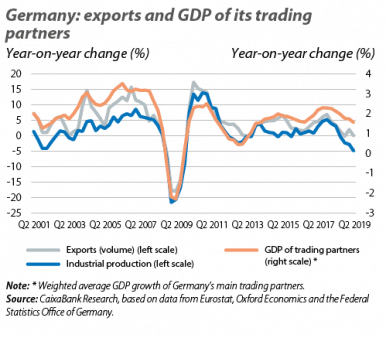 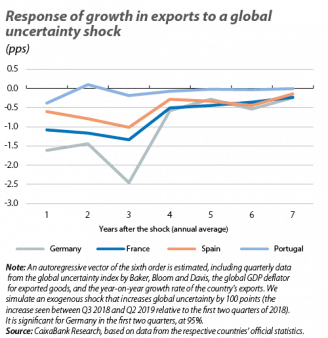 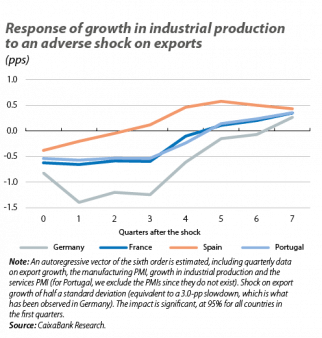