• After classifying the components of the current account balance as non-core and core, our analysis shows that
a significant portion of the deterioration is attributable to core factors (relating to non-energy goods and
non-tourism services).

• We cannot escape from the fact that these trends have occurred in a less favourable global context, especially due to the spike in global uncertainty and the slowdown in the growth of the euro area.

Between the end of 2016 and the close of Q1 2019, the current account surplus of the Spanish economy has decreased from 2.3% to 0.7% of GDP (12-month cumulative figures). Although it remains in surplus, the trend is clearly downwards and leads us to wonder: what lies behind this deterioration and for how much longer can it continue?

To address these questions, we will split the current account balance into three types of components:

Non-core. These are the components that are particularly influenced by foreign prices and on which there is little scope for action in the short term. In this category we include the income balance (the deficit of which is highly influenced by interest rates and, in particular,
by the cost of Spain’s external debt servicing, the outstanding balance of which is equivalent to 167%
of GDP in 2018) and the balance of energy goods (traditionally in deficit and highly dependent on the trend in the oil price).1

Core. This category includes the components that are most closely linked to the domestic balances of the Spanish economy and on which there is greater margin to act, although they are also subject to the inevitable influence of global demand. In this group we include the balance of non-energy goods (a group that is typically in balance or with a slight surplus) and that of services, excluding tourism (traditionally in surplus).

Tourism. The surplus of the tourism balance (3.4% of GDP on average in the last five years) is one of the constants that underpins the Spanish economy’s current account balance. This balance is influenced by factors beyond our control (such as political turmoil in rival destinations) as well as by aspects that affect the competitiveness of the sector and that can be managed internally.

Given the difficulties in discerning what fraction of the surplus is linked to non-core and core elements, we will treat the tourism balance as a separate category and will exclude it from the analysis. In any case, this does not substantially affect the results, since the effect of the tourism balance on changes in the current account balance has been limited in recent years: the strong performance of exports (foreign tourists visiting Spain) has been offset by the rise in tourism imports (Spanish residents travelling abroad).

In the recent history of Spain’s current account, we can identify three broad phases (excluding the adjustment period between 2008 and 2012):

End of 1995 - end of 2007. A deterioration occurred
at an average annual rate of 0.7 pps of GDP. This can
be explained by the poor performance of non-core components and the increase in core imports (which the relative strength of exports was insufficient to offset). In particular, non-core factors deducted –0.5 pps from the current account balance, of which 0.3 pps were due to the income balance and 0.2 pps due to higher oil prices.

End of 2012 - end of 2016. After the hiatus of the Great Recession, and the resulting reduction in domestic demand which helped to achieve a balance in the current account (–0.3% in December 2012), came the economic recovery. This brought with it a sustained improvement in the current account balance, which reached +2.3% at the end of 2016. This improvement of 0.7 pps per annum on average was possible thanks to certain non-core factors that proved highly favourable and contributed an average of 0.9 pps per annum. In particular, these included reductions in the oil price (0.7 pps) and in interest rates (0.2 pps). As for the core factors, this period was marked by the strength of exports (which provided an average annual contribution of 0.5 pps of GDP). This strength also offset much of the recovery in core imports (0.8 pps), which were boosted by the recovery in domestic demand. In the tourism balance, meanwhile, changes in exports and imports offset one another.

At the end of Q1 2019, the current account surplus had deteriorated down to 0.7% (–0.8 pps per annum on average). This was a result of a deterioration in both non-core components (–0.4 pps annual average, compared to +0.9 pps in 2013-2016), particularly the rise in oil prices, and core components (–0.5 pps versus
–0.3 pps in 2013-2016). In addition, the greater negative contribution from core components was not due to the boost to imports driven by domestic demand (core imports have deducted less than they did between 2013 and 2016), but rather to the slowdown in core exports. Indeed, in contrast to the norm since 1995, core exports are currently growing slightly below GDP (and their average annual contribution to changes in the current account balance has reduced by 0.6 pps compared to the period 2012-2016). Nevertheless, this is due to the slowdown in global demand and, in particular, to the lower growth seen in countries to which Spanish companies export (see third chart). It is also worth noting that the competitiveness indicators of the Spanish economy continue to perform very well. For instance, compared to our European partners, unit labour costs remain close to their lowest levels in the past 20 years.

Distinguishing by economic sectors, the most moderate growth in core exports can be found in the automotive sector, food and the manufacture of consumer goods (their contribution has declined by –0.5, –0.1 and –0.1 pps, respectively), as well as in non-tourism services
(–0.1 pps), which include engineering and consulting services and intellectual property. Compared to the period 2012-2016, we only see an improvement in the performance of core component exports in the case of semi-manufactured goods and other goods (0.1 and 0.2 pps, respectively).

This deterioration in the current account balance cannot be considered in isolation, however. The global context in which the Spanish economy is operating has become less favourable in recent quarters, especially due to the spike in geopolitical uncertainty and the slowdown in the growth of the euro area. In this regard, the Spanish economy has done well to maintain its foreign surplus: a surplus which, although lower than before, remains a far cry from the deficits seen prior to the Great Recession. However, the analysis performed in this article indicates that a large part of the deterioration in the current account is due to core components and in high value-added sectors. Therefore, we will need to keep a close eye on how these components perform over the coming quarters and the impact that the global slowdown has on them.

1. The price of oil explains 75% of the fluctuations in the energy balance between January 2003 and March 2019. In addition, interest rates account for 59% of the variability in the income balance between January 2010 (after the swings of the Great Recession had passed) and March 2019 (to estimate this figure, we use the 10-year sovereign yield of Germany as a benchmark). 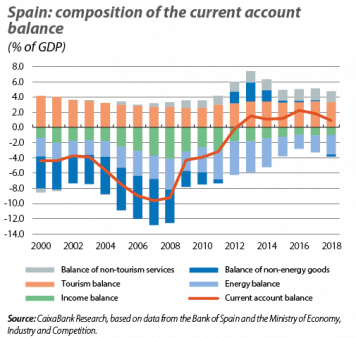 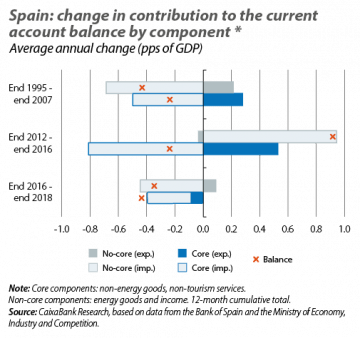 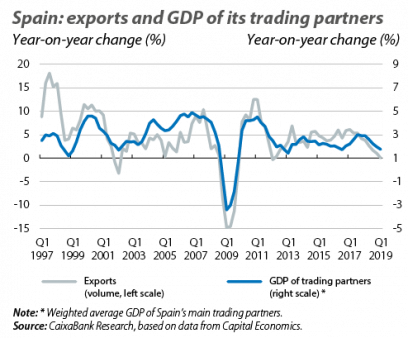 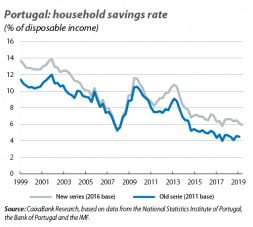 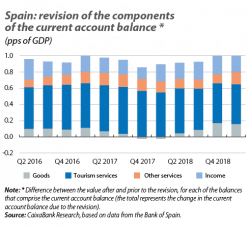