Global recovery underway, with the permission of the US and the euro area

We predict 3.9% world growth for 2015. If you feel that this figure is rather high, then you are not mistaken: it is clearly above the annual average for the period 1980-2014 (3.5%) and also represents a jump up from the range observed over the last three years (3.2%-3.4%). In spite of the pessimistic tone prevailing in the forecasts of most international organisations in the last few months, they all predict that growth will speed up next year. There is therefore broad consensus regarding the direction the world economy is expected to take.

The driving force behind this recovery lies in both developed and emerging countries. Specifically, the IMF expects growth in the main developed countries to rise from the 1.8% forecast for 2014 to 2.3% in 2015 and the increase predicted for the main emerging countries is also considerable: from 4.4% in 2014 to 5.0% in 2015. By country, the United States and China stand out, providing 44% of global growth while their economic share of the world's total is just 33%. At the opposite end of the scale are Japan and the euro area which, in spite of accounting for 24% of the world's economy, will only contribute a meagre 17% to its growth.

Moreover, this acceleration in growth is not expected to be accompanied by an upswing in inflationary pressures. In fact, for the coming year global inflation is expected to rise by just 0.1 pps, reaching 3.9%. The developed countries have kept inflation at a distance for some years now and, given that many of them still have low utilization of production capacity, it comes as no surprise that, in general growth is increasing while inflation remains at a moderate level. Inflation prospects are particularly interesting in the main emerging countries: even if growth remains at a relatively high level, inflation will only increase by 0.1 pp (from the 5.5% expected for 2014 to 5.6% in 2015, specifically).

Naturally the fall in oil prices predicted for the coming year should help this scenario to come about.1 But the underlying factors that lead us to believe the main emerging countries will be able to maintain a good rate of growth without this leading to inflationary pressure date from further back. Of note among these factors is the improvement in institutions responsible for designing economic policy; in particular the greater independence of authorities responsible for monetary policy, as well as greater awareness of just how important it is to keep a balanced macroeconomic situation.

Nevertheless, like last year, the risks threatening this scenario of global recovery are considerable. The different sources of geopolitical tension constitute one of the main factors that must be closely monitored. Ukraine, the Middle East, Isis... the list of ongoing conflicts that have intensified throughout 2014 is quite long. Theoretically, sooner or later common sense should prevail and the different parties should sit down at the negotiating table, with these conflicts gradually diminishing as a risk factor. However, such disputes are often promoted by minority groups with goals that are not standard and frequently unclear, making them difficult to predict.

In addition to geopolitical conflicts, we expect other risk factors that have accompanied emerging countries over the last few years to diminish in 2015. Specifically, one of the big fears recently hovering over analysts' forecasts was a sharp deterioration in China's economy. Although this cannot be completely ruled out as a risk factor, it is now less likely to happen. The Chinese government is demonstrating that it has instruments it can use to gradually direct the shift in its economic model towards lower but more sustainable growth rates in the long term. The risk of a systemic crisis breaking out in the main emerging countries has also diminished. The acronym of the «fragile five» economies used frequently a year ago, when the market did not discriminate between emerging countries and treated them as a common risk factor, now seems a distant memory. In the last few quarters it has gradually become clearer which countries have a healthier economic situation and are carrying out reforms to maintain balanced long-term growth (such as India and Mexico) and which are in a more vulnerable position (such as Brazil, Russia and Turkey).

In fact, from a global perspective the risk factors associated with developed countries seem more relevant, especially in the US and the euro area. Let's look at this step by step. At last the conditions in the US seem right for growth to reach levels of around 3%: the deleveraging process is now in its advanced stages; the real estate sector has completed its adjustment and both sales and prices have posted positive growth rates for several quarters; the labour market is responding to this improved economic activity with a job creation rate that is more than acceptable and unemployment has now fallen below 6%; while investment, the big task that was still pending for the US economy, has been growing apace for several quarters now. The macroeconomic outlook therefore provides the Fed with reasons to start normalising monetary conditions next year.

However, although this scenario seems reasonable, not all doubts have been dispelled. One of the most appreciable risk factors for the US economy is closely linked to its estimated potential GDP. After the recession, intense debate has arisen regarding the potential GDP of developed countries, especially those, like the US, whose growth was boosted by factors that were believed to be structural in the pre-crisis years but which have turned out to be merely temporary. This issue affects a scenario that could be particularly harmful for the global economy: the appearance of signs of overheating in the US, for example with upward pressure on wages sooner than expected. This scenario, which could materialise if observed and potential GDP are closer than believed, would reveal a lower growth capacity than predicted and would force the Fed to raise interest rates earlier than expected at present (and surely also accelerate the process of draining off the liquidity injected over the last few years). This would be a highly delicate scenario that would force the Fed to strike a difficult balance between gradually applying constrictive policies to ensure an orderly normalisation and pressure in the opposite direction from the aforementioned dynamics of the economy. At a global level, and beyond the consequences for financial markets (analysed in detail in the article «2015: monetary policy continues to set the tone for the financial markets» in this Dossier), this scenario could be highly detrimental for some emerging countries as they would lose the large amount of financing they receive from the United States.

Naturally, this scenario would also be harmful for the euro area as the United States is its main trading partner. The euro area continues to be a step or even several steps behind the US economy and, as we have seen in the last few months, its recovery is still very fragile. Although we do not believe the weakness observed recently is a precursor to a third recession, we do think that its growth capacity is very low and therefore vulnerable to any setback it may encounter along the way. In this respect, if the recovery ends up being slower than initially expected in the coming year (either due to the aforementioned external factors or due to internal factors), the support mechanisms already applied are likely to be intensified. In other words, even more accommodative monetary policy, extending the asset purchase programmes started up by the ECB over the last few months and, if necessary, launching new programmes that might include the direct purchase of sovereign and/or corporate bonds. It is also likely that such a decision would be accompanied by further relaxation of commitments to reduce fiscal deficits. Nevertheless, unlike the risk scenario for the United States, the global macroeconomic impact of a relapse in the euro area would probably be less significant. The effect of lower growth in the euro area would probably be felt by its closer neighbours, in particular the countries of Eastern Europe, but it should not affect other economic zones to any great extent.

In conclusion, when examined at a global level 2015 looks like it will provide some good figures, both for growth and inflation. However, this generally favourable situation contains some discordant notes including, unfortunately, the euro area. Moreover, the risks that have been threatening the main developed countries for several years now have not disappeared completely. We cannot let down our guard just yet.

1. For a detailed analysis of the dynamics of oil prices, see the article «Weakness, shale and Saudi Arabia's strategy behind the upheaval in oil» in this Dossier. 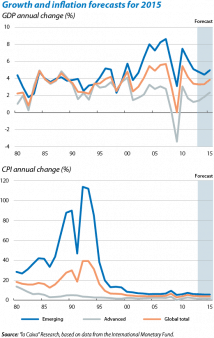