GDP growth is more robust in 2015 Q1. The euro area's economy grew by 0.4% from January to March, above the 0.3% recorded in 2014 Q4. By country, noteworthy are Spain's strong 0.9% growth quarter-on-quarter and France's surprisingly high GDP growth of 0.6% quarter-on-quarter, with a significant increase in private consumption. However, the high contribution of inventories to French growth suggests it is unlikely to maintain this rate for the remainder of the year. Germany's rate, namely 0.3% quarter-on-quarter, was a bit lower than expected but its favourable composition (domestic demand and exports are still looking strong) point to the country's expansion being solid while the Italian economy exited the recession it had been immersed in since 2008 (with the exception of 2010) with its GDP increasing by 0.3% quarter-on-quarter. Over the coming months we expect economic activity to continue growing in Italy at a moderate pace.

The European Commission improves its economic forecasts for the euro area. The European Commission believes the recovery will be slightly better than expected a few months ago thanks to the boost provided by several temporary factors: the fall in oil prices, the euro's depreciation and the monetary expansion programme by the European Central Bank (ECB) which is helping to make financial conditions more favourable. Nonetheless the impact of these factors will be uneven across countries. The upward revision in growth forecasts for 2015 was greater in Spain (0.5 pps) and Germany (0.4 pps) than in France (0.1 pps) and Italy (unchanged). The institution also lowered its growth forecasts for Greece from 2.5% to 0.5% and pointed to the country's financial situation as one of the biggest risks for the euro area's recovery. In the European Semester, the Commission warns of the structural weaknesses accumulated by many countries in the euro area and the temporary nature of the positive factors supporting growth. To strengthen the economy of the different countries in the European Union, the Commission has undertaken to reduce its number of recommendations from now on although these will be more specific and a more exhaustive examination will be carried out regarding compliance. Along these lines, the different country reports contain detailed priority actions: to increase competition in the market of products or services (Germany), make labour legislation more flexible (France), consolidate the deficit reduction (Spain) and underpin weaknesses in the financial sector (Italy).

Economic activity remains in the expansionary zone in 2015 Q2 although it is not speeding up, as shown by the trend in the composite PMI for May, for instance. However, this reading varies depending on the zone analysed. In Germany, the composite PMI posted its lowest level for 2015 in May but is still at a relatively high level. In France, on the other hand, it showed a slight increase although the level is still very modest. The overall assessment for the rest of the countries is clearly positive, both in terms of level and also the trend of the last few months. Other activity indicators also suggest the recovery is likely to continue. Industrial production, seasonally adjusted, rose by 1.3% in 2015 Q1 (0.5% in Q4), in line with the acceleration in GDP in Q1 shown by data from the National Accounts system.

Consumption continues its upward trend. Retail sales maintained a notable rate of growth in March of 1.6% year-on-year. Although this figure is slightly below the 2.8% posted in February, the average for Q1 was higher than in Q4 so we expect private consumption will have continued growing in Q1 (the breakdown of GDP by component has yet to be published). Regarding Q2, consumer confidence figures point to consumption still looking strong with the help of improved performance by the labour market. Specifically, employment expectations picked up noticeably in the months of April and May, both in the services sector and in manufacturing, with a higher average level than the one recorded in Q1. A consolidation in employment expectations would act as a spur for household spending.

International trade boosts the recovery. The euro's depreciation over the last few quarters is helping to improve the price competitiveness of products from the euro area. The result can be seen in trade flows: exports of goods from the euro area to the rest of world rose by 5% year-on-year in Q1 while imports remained stable. The trade balance reached 52.6 billion euros, a significant increase on the same period last year (30.7 billion). The growing surplus of the goods account is helping the euro area's current account balance to remain healthy.

Germany: more moderate growth in Q1 but with an encouraging composition. The details of Germany's GDP growth are promising. Although the 0.3% quarter-on-quarter increase was less than expected, consumption, investment and exports all made strong gains. The more subdued growth in GDP in Q1 was therefore due to the negative contribution from variations in inventories (–0.3 pps) and imports (–0.6 pps). Moreover, growth prospects are favourable in Q2 as both supply indicators (the business climate index IFO, for example, stood at 108.5 points in May compared with 107.2 in Q1) and demand indicators (consumer confidence in May remained above the level for Q1) suggest the German economy is well on track.

Robust growth in emerging Europe. The dynamism shown by German imports in the last few quarters also helped the rate of growth for the economies of emerging Europe to accelerate in Q1. Particularly positive was Poland's notable growth (1.0% quarter-on-quarter) which, as it is the region's main economy, will have a strong impact on the rest. The Czech Republic posted an exceptionally high rate (2.8% quarter-on-quarter) thanks partly to a legislative change in the tax on tobacco, which deducted from growth in Q4 but made a positive contribution in Q1. Significant progress was also made in economic activity in other countries from emerging Europe so, for the moment, they do not seem to have been greatly affected by the uncertainty regarding geopolitical tensions between Russia and Ukraine, although we must still be cautious.

Inflation is picking up. Stronger consumption throughout the euro area and the recovery in oil prices have helped inflation to leave its negative terrain. Judging by the trend in inflation for May in Spain and Italy (the rate for the euro area and most countries has yet to be published), inflation should continue to recover. Specifically, the harmonised inflation rate rose in Spain by 0.4 pps to –0.3%, and by 0.3 pps in Italy, to 0.2%. For the remainder of the year we expect the improvement in consumption to push up prices. Moreover the base effect will evaporate of the drop in oil prices of the last few months, which will also increase inflation. The euro's depreciation will also push up prices as it will make imports more expensive.

The money supply continues to get stronger. The accommodative stance of the ECB's monetary policy, especially via its public debt purchases, is affecting the broad monetary aggregate (M3) which includes currency in circulation, sight and term deposits and other securities such as shares in money market funds. As a whole, the rate of growth in the M3 has accelerated by 0.6 pps to 6.6% year-on-year mainly because it includes deposits from the end sellers of shares acquired by the ECB (households, non-financial firms, etc.). In fact, in an environment of very low interest rates, some of the more liquid components of the M3 have become more attractive. Similarly, the change in composition of portfolios also led to growth in the M3 as some investors moved away from longer-term financial assets. Lastly, the continued recovery in credit has also supported the increase in the M3 although financial institutions continuing to sort out their balance sheets and the additional deleveraging required in some economic sectors are still acting as a brake on credit. 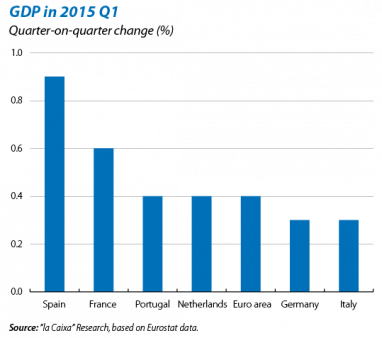 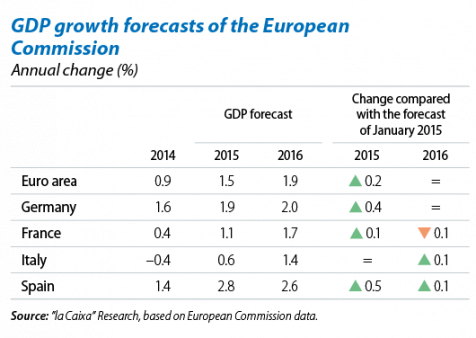 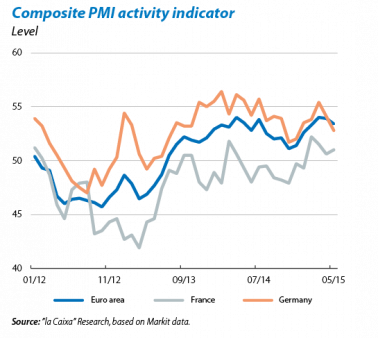 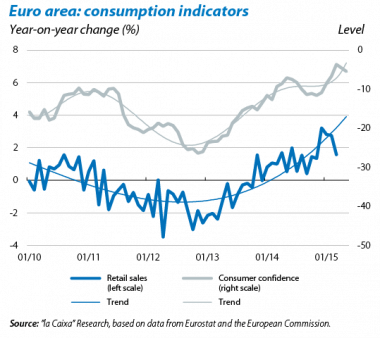 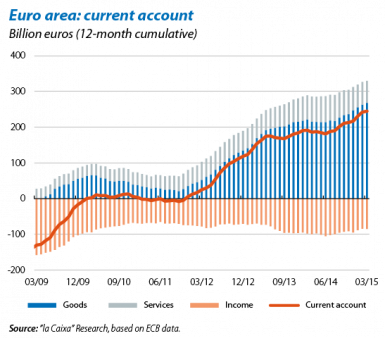 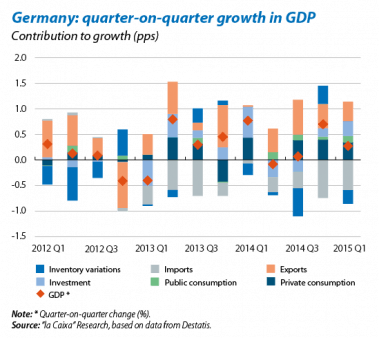 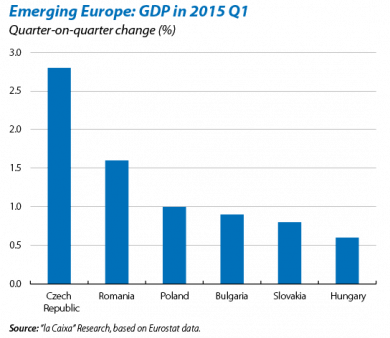 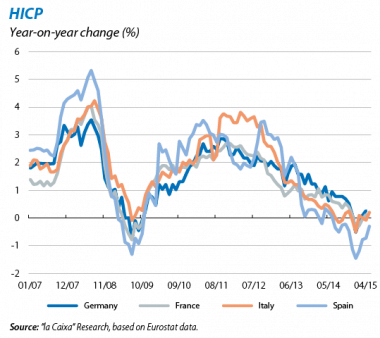 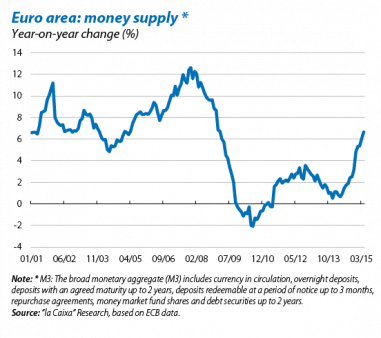