Economic activity has been practically at a standstill for the last 3 years. Unemployment has been growing and is now approaching 10%. Young people are the hardest hit with a rate that exceeds 12% and long-term unemployment is becoming entrenched. Only social aid is alleviating the ravages of a labour market that is getting worse on a daily basis. Although this might seem like a present-day description of a country on the periphery of Europe, it is actually the situation of Germany in 2003.

These figures contrast sharply with the dynamism shown by Germany's labour market today. With an unemployment rate of 5.1%, and falling, it is the European country whose labour market has best withstood the crisis. While the rest of the countries have seen job losses, a sharp rise in unemployment and a fall in the activity rate, in Germany the panorama is completely different: it has even had to resort to foreign workers to meet its growing demand for employment.

How has it achieved this? The explanation lies in an ambitious agenda of reforms known as Agenda 2010, implemented by the German chancellor, Gerhard Schröder, between 2002 and 2005 with the aim of promoting economic growth and reducing the country's high unemployment. Most of these reforms focused on the labour market and the social security system but their overall scope was more extensive, including: fiscal reform, with substantial cuts in income and corporate tax; reform of public healthcare, introducing co-payment and limitations to public cover; and a reform of the pension system in order to raise the effective age of retirement. Moreover, Germany had already been carrying out structural reforms for several years, such as the insolvency act passed in 1999 which introduced bankruptcy proceedings for individuals for the first time.

The main objective of these successive labour reforms, called Hartz I-IV in reference to Peter Hartz, executive director of human resources at Volkswagen and head of the commission that advised the German government, was to increase the efficiency of active employment policies; i.e. to improve assistance for the unemployed to help them find a job quickly. With this aim in mind, the way in which the state employment service was managed was completely transformed, including the creation of public temporary employment agencies, the provision of individualized attention for the unemployed(1) and the introduction of a system of training coupons so that the unemployed could adapt their skills to the demands of the market. On the other hand, stricter rules were introduced for receiving unemployment benefit that had, until then, been quite generous (up to 57% of the last regular net salary for an indefinite period) and was believed to be the main cause of long-term unemployment. For example, after the reform, rejecting «reasonable» job offers could result in a cut of up to 30% in benefit. However, the most radical change was the limitation to receiving contributory benefit (18 to 12 months depending on whether the person was aged 55 or under). For the long-term unemployed, a new fixed rate benefit was created (not related to the last salary) that was combined with social assistance benefits. Such strict criteria were established for receiving this subsidy that, in practice, it became a basic income for those households without any other income or assets.

The labour reform also tackled the employability of the least skilled, who make up the majority of the long-term unemployed. Among the different measures implemented to make the different forms of employment more flexible, of note was the elimination of employer social security contributions in the case of salaries under 400 euros (currently 450 euros), while a sliding scale of contributions was set up for wages between 400 and 800 euros. This measure led to the generation of «mini-jobs»: part-time, low-skilled jobs that are normally related to domestic work, catering and retail.

These reforms soon made the labour market more flexible with beneficial effects for economic activity: the activity rate went from 73.8% in 2005 to 77.1% in 2012, while the unemployment rate fell from 11.3% in 2005 to 5.5% in 2012. Given that many of these measures were aimed at reducing long-term unemployment, it comes as no surprise that the greatest achievement has been in this area, with an 11.1 percentage point drop during the double recession (see the graph below). These improvements would not have been possible without a more flexible job market or without the measures aimed at activating the unemployed. But such good results can also be attributed to other factors that have characterized the German economy since the Second World War, such as the joint decision-making system in business management and its dual education system. On the one hand, worker participation in company management via trade unions has played a fundamental role in containing wages and adopting measures to make companies more flexible internally. For example, many German firms have taken advantage of the drop in demand during the crisis to train their workers instead of firing them, thereby gaining a competitive advantage for when activity picks up again. On the other hand, the dual education system, which encourages professional education, has had clearly beneficial effects for young people entering the labour market: while periphery Europe leads the field with high youth unemployment rates, Germany is enjoying its lowest rate for the last 20 years (8.1%).

However, in spite of these achievements by the Hartz reforms, we must not forget that they have also had a series of less welcome consequences. On the one hand, the unemployed have seen their income fall substantially, leading to a greater rise in their poverty risk (see the graph below). On the other hand, those employed under temporary or part-time contracts have also seen a greater rise in their poverty risk than the average for the euro area. Even Schröder himself, in a speech analyzing the last 10 years since the reform was implemented, acknowledged that it is still not without controversy today. There are two aspects in particular that he would change if he had the chance. Firstly, the excessive rise in low-wage workers. The idea of the reform was to use mini-jobs as a bridge for low-skilled workers to access the labour market. However, in effect many workers do not seem to have joined the more stable labour market. A second aspect to improve would be temporary employment. While the reform aimed to increase the flexibility of firms to cover the peaks in demand, in practice, according to Schröder, legislation might have been used to replace part of the labour force with lower paid workers.

In short, from the view of economic efficiency, the outcome of the reforms is clearly positive: Germany has enjoyed a decade of prosperity and, moreover, when the double recession arrived, both global and European, its labour market has been highly resistant. Given this evidence, many people in Europe are suggesting that the German reform is a model that is worth imitating. Now that a large number of countries are designing their structural reforms that have been postponed so often, it would be worthwhile to design them taking advantage of the German experience while making the necessary changes in order to enjoy the achievements and minimize the effects of the less welcome outcomes.

(1) The ratio of public employment office employees to the number of people on unemployment benefit was set at 1:75 for unemployed people under 25 and 1:150 for the rest. 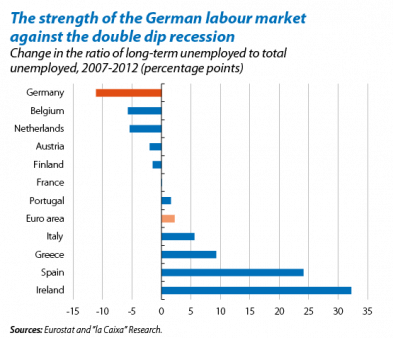 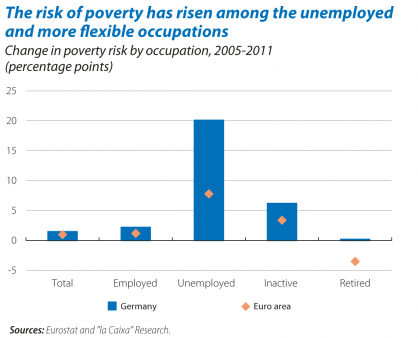 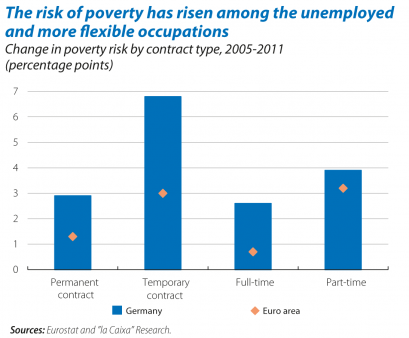