The International Monetary Fund (IMF) published its World Economic Outlook (WEO) at the beginning of October. Regarding advanced countries, the Fund still expects moderate growth of 1.2% in 2013 which will speed up to 2.0% in 2014. The forecast for emerging economies is also one of acceleration: this year will end with a rate of 4.5%, reaching 5.1% in 2014 (lowered from the figure of 5.5% predicted by the IMF in July). In the Fund's opinion, two events that will affect the outcome of 2014 are the turning point in US monetary policy, aimed at normalisation, and China's lower growth due to its shift from an investment-based model of growth to one based on consumption. This moderation in China will relax global commodity prices and inflationary tensions.

According to the Fund, growth in advanced economies is being supported by the improved tone in the American and Japanese economies, in line with our forecasts, while Europe's recovery is still fragile and with downside risks. The USA is expected to gain momentum in 2014: the IMF projection is 2.6% and ours 2.8%. This will be possible thanks to various factors: less fiscal adjustment than in 2013, private consumption boosted by higher household wealth and a real estate market that continues to recover thanks to demographics and a reduction in the oversupply of housing. For the Fund, there are downside risks that come from the fiscal debate (the debt ceiling and sequester) and upward pressures on interest rates. In our opinion, the agreement regarding the debt ceiling reached on 17 October (after the WEO was published) and our belief that the US recovery can withstand a moderate rise in interest rates justify a forecast that is slightly higher than the IMF's. In the medium term, the greatest risks are continued low activity rates in the labour market and stagnation in business investment. Japan's outlook is one of improvement based on the boost from Abenomic's expansionary policies but the Fund has identified, albeit tending to overestimate, two problematic points: the need to tackle fiscal consolidation (with a VAT hike in 2014) and the lack
of precise plans for structural reforms.

The IMF believes the emerging economies are burdened by more restrictive financial conditions and by inflation limiting their central banks' room to manoeuvre. Although growth will pick up in 2014 it will still be 2.5 points lower than the figure recorded in 2010. China and India are prime examples of this dynamic although their situations are very different. India is the economy whose 2014 forecast has been lowered the most, given the significant bottlenecks affecting its capacity to grow without inflation. On the other hand China still has inflation under control and ample room to manoeuvre to support growth with monetary and fiscal policies. We believe this is a very important factor which leaves our forecast for 2014 at 7.6%, higher than the WEO's figure of 7.3%.

The IMF's growth forecast for Spain in 2014 is 0.2%, slightly below the 0.8% we have projected. This difference is due, firstly, to the fact that fiscal consolidation should have less of an effect on growth than estimated by the Fund considering the experience of the last few years. Similarly, the gains in competitiveness and greater internal flexibility already achieved by firms will help to create jobs and thereby boost demand and growth. 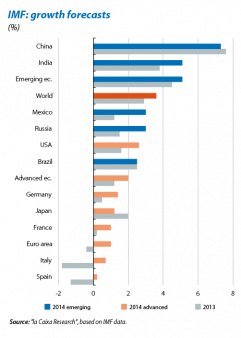