On measuring and using GDP

GDP is undoubtedly the predominant statistic in the world of economics. It is used by governments to produce their budgets, by central banks to formulate monetary policy, by investors to administer their portfolios and also by economic policymakers. But is it appropriate to use GDP for such a wide range of purposes? As noted by Nobel prize-winner Joseph Stiglitz: «What we measure affects what we do; and if our measurements are flawed, decisions may be distorted». In other words, in order to use GDP properly we must first of all understand what it is, what it measures and what it does not measure.

GDP measures the value of the final goods and services obtained in an economy over a certain period of time. It dates back to the Great Depression of the 1930s in the United States, when the need arose to calculate how far the economy was shrinking. Over the years, the national accounts system, first created when production was eminently agricultural and industrial, has gradually adapted to changes in economic production. In the digital era, the growing importance of research and development (R&D) in production, as well as the production of intangible goods, represent a considerable challenge for measurement: how can their value be included within GDP?

The most recent attempt to adapt the calculation of GDP to the new economy took place this very autumn. European countries have started to publish their national account data using the new European System of National and Regional accounts (ESA 2010) which, in turn, meets the standards dictated by the United Nations (SNA 2008) and implemented in the US, Australia and Canada. Among the changes introduced is the treatment of R&D expenditure as investment. Until now it had been considered as intermediate consumption in the production process and, as such, was not directly included in GDP. The new methodology recognises that R&D expenditure is actually an investment since it represents an increase in the stock of intangible capital that can be used repeatedly in production and consequently directly increases the GDP figure.

The impact of including R&D expenditure is quite substantial: nominal GDP in 2010 for the European Union has increased by 1.9 pps, rising to 4.0 pps for Finland and Sweden. In addition to this change, the new methodology for calculating GDP also includes other factors such as spending on weapons systems in the calculation of investment and illegal activities such as prostitution, drug production and trafficking and smuggling in the calculation of national revenue. If we take into account all the methodological changes implemented, the total revision of GDP amounts to 3.7 pps for the whole of the European Union and, in 8 out of the 28 countries, GDP has increased by more than 4 pps (see the graph). It is as if we have suddenly become richer, at least in statistical terms.

These data illustrate that including or excluding certain productive activities in GDP can have a considerable effect, becoming even more relevant when economic policy decisions are based on these figures without considering what they do or do not include. This illustrates the alleged lack of investment in the main developed economies. In the euro area, the share of investment in GDP has fallen from 22% in 2007 to 18% currently and the situation is similar in the US. Given these data, many are calling for greater investment in these economies in order to boost their potential growth. But what if investment is not being correctly calculated in the GDP figures?

The considerable impact of including R&D expenditure as investment suggests that national accounts might be omitting a part, and probably a substantial one, of the investment in intangible assets such as organisational capital or brand equity (see the article «Intangibles: the new investment in the knowledge era» in this Dossier). Due to the inadequate treatment of intangible assets in national accounts, some economists have attempted to identify and calculate investment in such capital.1 In the US, investment in intangible assets is significant and is growing: in 1977 it accounted for around 6% of GDP, a share that has increased up to just over 12% of GDP in 2011. The result is that total investment (including intangibles) exceeded 19% of GDP in 2011 and is showing an underlying positive trend. In this case it seems reasonable to question the need to increase investment without first analysing the situation accurately. In any case, due to the economic crisis a lot of developed countries are likely to have an investment rate (in tangible and intangible assets) that is lower than desirable but the lack of statistics for this area make it difficult to evaluate just how appropriate this kind of recommendation would be.

However the difficulties in measuring GDP presented by the digital revolution go beyond investment. One vital case in point is the measurement of the consumption of free goods and services (see the article «Even free things have a price» in this Dossier). Free consumption, as it is not associated with any monetary transaction, is unlikely to be included in GDP, which is estimated based on data from the monetary payments made. The problem becomes even greater due to the substitution effect; i.e. when consumption falls of a paid good (e.g. making a conventional telephone call) that would be included in GDP because a consumer uses a free good (e.g. making a call via a platform such as Skype). Although difficult to quantify, Brynjolfsson and Hee Oh (2012)2 estimate that the value of free goods and services consumed in the US could total around 100 billion dollars a year, a considerable sum that is not included in the GDP figure.

As we have just seen, using GDP can sometimes be problematic because of what it does not include. Other times, as we will see, it is because of what it does contain. By way of example, the calculation of GDP includes the shadow economy and illegal activities (as mentioned above, the latter were added in the last revision). This is relevant for economic policy because a lot of measurements are based on GDP. For example, the public deficit is usually measured as a percentage of GDP. As part of the Excessive Deficit Procedure of the European Commission, Spain's public deficit target for 2013 was 6.5% of GDP. With April's estimate this target would have been exceeded by 0.1 pp (6.6% of GDP). However, the new calculation of GDP has reduced the deficit to 6.3% of GDP,3 meaning that Spain met and even bettered the target agreed with the European Union. It may seem paradoxical that this has been achieved partly due to the inclusion of illegal activities in the GDP figure, which the government receives no revenue from. A similar effect can be seen in the ratio of public debt to GDP which fell by 2.3 pps between April and October thanks to the revised GDP figure.

Given the number of limitations represented by estimating GDP, under certain circumstances other figures need to be used that are more in line with the object of the analysis. For example, instead of using GDP per capita to measure a nation's progress, indicators of social well-being have been developed that value other aspects affecting people's quality of life, such as the quality of education or the environment (see the article «Does a country's GDP reflect its well-being?» in this Dossier).

In short, GDP is, and will continue to be the main tool used to measure the progress of an economy although significant effort is certainly being made to adapt national accounts to the new economic situation. The difficulty lies in its use (and misuse) to formulate economic policies and set priorities. It is therefore necessary to be aware of the limitations of GDP and use it in conjunction with other complementary measurements. As a result, economic decisions will be more appropriate.

3. Specifically, 0.2 pps can be attributed to the revision of GDP and 0.1 pp to the improvement in the local government corporation balance. 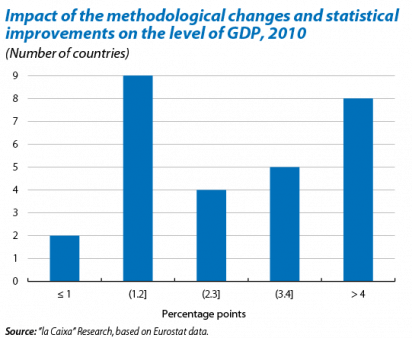 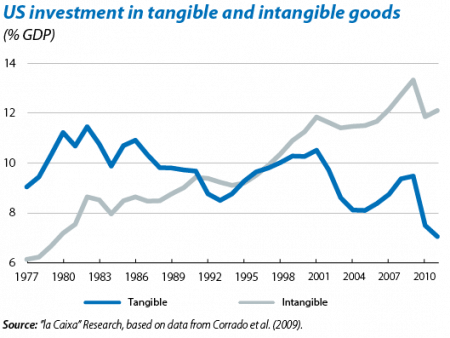