The IMF has improved its growth forecast. Specifically, in January it increased the growth rate for the euro area's economy in 2014 and 2015 by 0.1 percentage points, up to 1.0% and the 1.4%, respectively. Spain contributed notably to this improvement (from 0.2% to 0.6% in 2014 and from 0.5% to 0.8% in 2015). Nevertheless, the IMF expects a recovery at differing speeds, slower in the periphery countries than in the core. In effect, the high levels of debt, both public and private, and financial fragmentation will slow up the revival in domestic demand. According to the IMF, exports will still be the main source of growth. It estimates that Germany will continue to lead the recovery with 1.6% growth in 2014 and 1.4% in 2015. In France the increase will be moderate this year, namely 0.9%, but this is expected to improve in 2015 with annual growth of 1.5%.

The recovery in economic activity is consolidating. In January, the purchasing managers' index (PMI) for manufacturing reached its highest level since June 2011 (53.2). In the last few months, this business activity indicator has accentuated its positive trend. January's figure, for example, was clearly above the average for the last quarter of 2013, namely 51.9 points. If this upward trend continues, we might see a slight acceleration in the GDP growth rate in 2014 Q1. The start of the year is therefore looking positive in the euro area. This time an increase has been seen both in Germany and France, which has left behind three months of declines. In spite of this, the still low French PMI (48.5) confirms the difficulties faced by the French economy to consolidate a comfortable growth trend. In this respect, over the next few months the potential impact on business and consumer confidence of the details of the reforms announced in the country's National Pact for Growth, Competitiveness and Employment will be decisive.

The periphery is making up lost ground. The economic sentiment index produced by the European Commission continued its upward trend started last May and reached 100.9 points, its highest level since July 2011. Of particular note is the recent better performance by confidence in the periphery. During the last three months, on average, the increase in the economic sentiment index was greater in Portugal and Spain, 2.4 and 1.8 points respectively, than in the core countries, although in Germany this indicator is already at a high level (106.7 points) and is showing a continued upward trend. In France, in spite of a notable upswing in January of 1.1 points, the economic sentiment index remains weak (97.1 points) and doubts still exist regarding the pillars supporting French growth in the medium term. These figures show greater dynamism in the periphery countries and this could lead to the euro area's recovery being somewhat more vigorous than had been expected a few months ago.

The push from domestic demand is helping to consolidate growth. The business opinion survey carried out by the European Commission points to investment rising considerably in 2014. The results also show that, on average, demand factors will be the main determining factors for this increased investment. With regard to consumption, retail sales recorded their biggest rise in five years in November, namely 1.5% year-on-year. The upward trend in consumer confidence is also reinforcing the belief that consumption will play an increasingly important role in the recovery. Specifically, this indicator rose by 1.8 points in January, the highest increase since July 2011. This notable dynamism in consumption should help inflation to gain ground and leave its current levels, which are very contained (0.7% in January). Should this happen, the risk of deflation would also diminish. In this respect, the president of the European Central Bank, Mario Draghi, insisted during his appearance at the «World Economic Forum Annual Meeting» in Davos that deflation is not very likely. Moreover, he repeated the strong commitment of the senior monetary authority to adopt additional measures should it be necessary.

The change in trend in the labour market confirms the recovery in domestic demand. Unemployment has reached a peak. In December, and for the third consecutive month, it held steady at 12.0%, below the average for 2013 as a whole, namely 12.1%. The improvement in employment expectations in January, for the ninth consecutive month, confirms the revival in employment. The unemployment rate is expected to fall over the next few months, reaching an annual figure of 11.8% in 2014. This fall will be very gradual because companies will first increase the number of hours worked. Moreover, those workers discouraged by the bad economic situation who had left the labour market are likely to join it again to find work as the economic recovery consolidates. Although the differences between countries are still significant, of note is the improve tone of the periphery. Specifically, the index of expectations for the services sector rose significantly in Spain, by 7.8 points, reaching positive terrain for the first time since the summer of 2008. In Germany, the labour market is still exemplary with an employment expectation index that is rising at a good rate although the unemployment rate is already at an all-time low. For the euro area as a whole, as the recovery in the labour market consolidates, the positive trend in gross disposable income is likely to continue supporting a more sustained growth in household consumption.

Exports lose steam but expectations are favourable. Over the last year, the volume of exports has fallen in the largest economies of the euro area. The exception has been Spain which, throughout the year, has followed a clearly positive trend even though the initial boost diminished in the last few months of 2013. This loss of steam in foreign demand is expected to be temporary in the euro area as a whole. In this respect, it is encouraging that the export expectation index of the European Commission is showing a positive trend, suggesting that the foreign sector is still notably supporting the recovery.

Positive figures in the United Kingdom, albeit with some question marks. According to the flash figures provided by the British statistics institute, this country's GDP grew by 0.7% quarter-on-quarter in 2013 Q4. In 2013 as a whole, growth was 1.9% (0.3% in 2012), the largest expansion since 2007 and higher than what had been predicted a few months ago. This improved result is due to the series being revised upwards as from 2012 Q1 and denotes that the growth rate has been clearly higher than that of most EU countries. Therefore, the figures were very encouraging at first sight. However, a more thorough analysis of the composition of this growth calls its future into question, as it largely depends on private consumption and stock accumulation. Moreover, the trend in the foreign sector is still poor. Consequently, the underlying imbalances of the British economy do not seem to be correcting. Another noticeable factor is the low level of productivity. Since the recession bottomed out in 2009, Britain's GDP has gradually recovered, in 2013 Q3 reaching 2% below its level in 2008. However, productivity (GDP per hour worked) was 4.4% lower.

The European Commission presents a reform to reinforce the EU's financial stability, yet another step to reduce the fragmentation in the financial markets that is still present. The project aims to reduce the risk surrounding systemic banks by removing potentially risky proprietary trading from the parent bank, as well as improve the transparency of shadow banking. Although the number of banks that would be affected if this regulation is finally passed is relatively small, around 30, they account for 65% of the whole banking system of the EU. These measures are pending approval by the European Parliament and, although in principle no great changes are expected in the project presented by the EC, the elections planned for next May could significantly delay the schedule for their final approval. 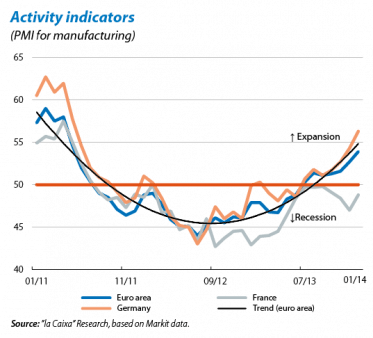 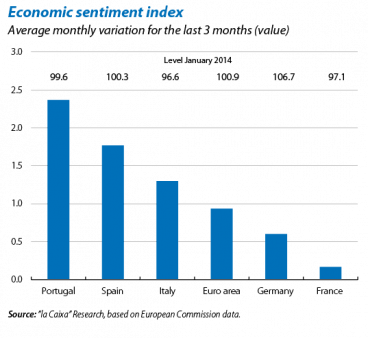