The points of support for corporate profitability

Companies are the driving force of the economy. Job creation, so vital to boost the labour market, depends on companies, as well as investment, which is needed to increase the economy's long-term growth potential. For companies to fulfil these functions that are so crucial for the economic recovery they must have a sufficiently healthy balance sheet and be able to generate earnings that offset the risks assumed by business owners. In this article we look at the state of health of the corporate sector based on data from Spain's National Accounts system, analysing the trend in non-financial private firms as a whole.

As can be seen in the graph, corporate earnings have started to rise. In 2015 Q3 the gross operating surplus (GOS)1 generated by non-financial firms grew by 3.1% year-on-year,2 a considerable increase compared with the 0.1% reduction in 2014. In fact, the GOS remained almost at a standstill between 2008 and 2014 due to the drop in sales and the closure of many firms, interrupting a long upward trend. Nevertheless, the GOS was prevented from falling due to an increase in gross corporate profit margins resulting from the efforts made by many companies to contain their costs and increase productivity in order to compensate the slump in sales. In fact, the evolution of the ratio between the GOS and the gross value added (GVA)3 of non-financial firms, an approximation of gross corporate profit margins at an aggregate level, shows counter-cyclical behaviour during the last phase of the recession.4 However, since 2014 Q1 a change in trend has been observed in this ratio which would indicate that gross profit margins are adjusting progressively thanks to greater economic activity and higher turnover.

Certainly the main point of support for corporate earnings in the current recovery stage is the increase in sales. Companies have benefitted from dynamic private consumption which, in turn, has been encouraged by job creation and improved confidence. The GVA started to grow in 2014 Q2 and accelerated its rate of growth to 3.7% year-on-year in 2015 Q3; but unlike the situation with the GOS, the GVA is still 6% below its pre-crisis level.

Companies are also receiving support from two additional elements. Firstly, wage containment. Although payments to salaried workers posted growth of 4.1% year-on-year in 2015 Q3 this increase can be explained entirely by the rise in the number of employees (3.1% year-on-year) as wages per employee have remained almost the same (0.9% year-on-year). Secondly, financial costs have fallen thanks especially to lower interest rates paid by companies on their debt and also, albeit to a lesser extent, to the reduction in the level of debt itself. Specifically, between 2012 Q2 and the 2015 Q3 financial costs fell by EUR 25.44 billion. 87% of this reduction can be explained by the drop in the average cost of debt from 3.0% to 1.4% and the rest by a reduction in debt during this period (equivalent to 24 pps of GDP).

In summary, 2015 was a good year for the business sector and a review of the factors supporting its recovery suggest this positive trend will continue in 2016.

1. GOS equals gross value added (GVA) less the wages paid to employees and taxes on production and imports. It should be noted that the GOS cannot be interpreted directly as corporate earnings since it includes, among other factors, capital payments and amortisation.

2. All the data in this article are cumulative over four quarters.

3. The GVA is equivalent to the production of goods and services less intermediate consumption.

4. This ratio should be seen as an overall estimate of corporate profit margins but involves some problems of interpretation and measurement. See «La evolución reciente de los márgenes de las sociedades no financieras», Boletín Económico, December 2013, Bank of Spain. 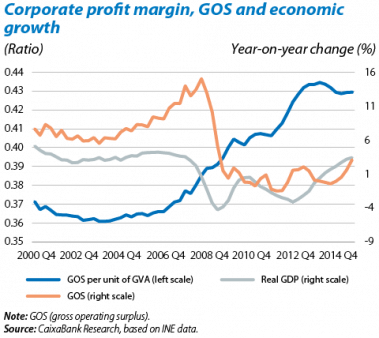