Portugal: making good progress but still with some homework to do

This May marks a year since Portugal successfully completed its financial assistance programme. As part of this programme, a series of structural reforms and fiscal adjustment measures were carried out that have helped the country to stabilise its macroeconomic imbalances and exit the recession with favourable economic prospects.  However, although the progress made is evident there are still imbalances that could hinder economic growth in the medium term. In this Focus we analyse two of these: the high net external borrowing position and a corporate sector whose leverage is still high.

After the euro was introduced, the Portuguese economy continuously posted huge current account deficits. This situation led to a worsening of the net external borrowing position for the country, with its net international investment position (NIIP) reaching –112% of GDP in 2014, making it highly vulnerable to fluctuations in international capital flows. However, the current account balance has been corrected substantially over the last few years. The first surpluses were recorded in 2013 and 2014, particularly thanks to the considerable adjustment in the trade balance. In addition to the logical contraction in imports during a recession, this improvement in the balance of goods and services was also supported by an increase in exports due to significant improvements in competitiveness. Specifically, Portugal's unit labour costs compared with its main trading partners have fallen by 9% since 2007 and exports of goods and services in relation to GDP have increased from 27% in 2009 to 40% in 2014. The country is also managing to lessen the loss of export market share being experienced by most developed countries: between 2007 and 2014 Portugal's share had only fallen by 10% while Germany and Italy have lost 20%. However, in spite of the progress being made, the country still needs to improve its trade balance to ensure its NIIP reaches sustainable levels as soon as possible (see the first graph).

The second obstacle to Portugal's economic growth is the heavy borrowing by firms, limiting investment capacity and job creation and therefore the country's growth.1 In 2013 the debt of non-financial firms reached 168% of GDP, a level only exceeded in the euro area by Greece, resulting in financial costs totalling 33% of gross operational profit, doubling the figure of Spanish or Italian firms. Although deleveraging took some time to get going due to the difficult economic situation, since 2013 the ratio of debt to GDP has fallen by 14 pps.However, it is important to note that there are marked differences between firms depending on their size. While large firms have moderate levels of debt given their ability to repay and a wider range of possible sources of financing, SMEs, which largely make up Portugal's business fabric and provide employment to 79% of its workers, are still heavily indebted with an average debt to equity ratio of 240%, far above the levels considered suitable by the European Commission.2 It is therefore important for Portugal to take advantage of the favourable economic climate expected over the coming years to complete its deleveraging.

In summary, Portugal's growth prospects after the bail-out are encouraging. Nevertheless, its imbalances must be corrected decisively and quickly to guarantee the country's growth in the medium and long-term.

2. In general the European Commission believes the optimum ratio is around 100% although this depends on the specific characteristics of the industry and the company itself. Ratios over 200% are seen in firms with excessive debt. 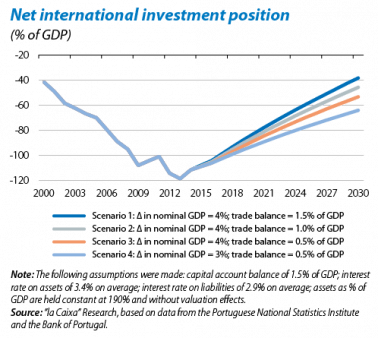 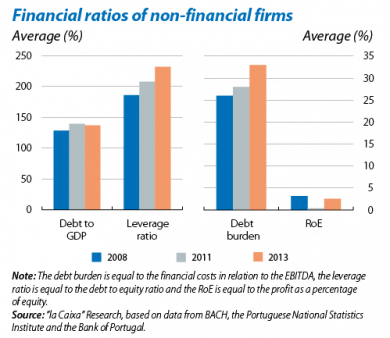