A positive year draws to an end, but downside risks persist

2018: things are not looking so bad. The aggregate macroeconomic data paint a picture of a broadly positive 2018, in line with the forecasts made at the end of last year, and everything suggests that global growth will stand at around 3.7% for the year as a whole (only 1 decimal point lower than we expected in December 2017). Thus, despite the fact that there are now more sources of risk, for the time being global macroeconomic health has shown remarkable resilience. The outlook for 2019 has also remained virtually unchanged: we now expect growth of 3.6%, only 1 decimal point below the forecast of a year ago. By country, however, there have been some notable surprises, both positive and negative. Taking the positive surprises first, the North American economy has performed better than expected, with growth that will probably end up being 0.4 pps higher than predicted a year ago. In any case, it is important to emphasise that this is largely due to the fiscal boost implemented by the Trump Administration, rather than structural factors. In contrast, the euro area has been the main negative surprise given that, in all likelihood, growth for 2018 will prove to be lower than expected a year ago. Nevertheless, the shortfall in question is no debacle: the major negative surprise occurred in the growth figures for Q3 (just 0.2% quarter-on-quarter), but this has been mainly due to temporary factors. The outlook for 2019, on the other hand, remains positive and reasonably similar to what we expected a year ago.

Protectionist risks remain significant. The US midterm elections did not deliver any major blow to Trump (the loss of the House of Representatives serves as a warning, but the Republican Party retained its majority in the Senate). Therefore, this electoral process is not expected to lead the US Administration to substantially change its position regarding its trade policy. As a result, the trade tensions between the US and China are likely to remain high over the coming months. Nevertheless, a window of opportunity has opened up that could lead to a certain cooling of tensions: the discussions between high-level trade representatives from China and the US that took place in November were a positive step, and the possibility of a trade truce being reached at the G-20 summit in Buenos Aires in early December is now more tangible, following the meeting between Trump and Xi Jinping.

The preliminary Brexit agreement is reached, but its approval lies in the balance. Specifically, London and Brussels have reached a preliminary agreement on the United Kingdom’s departure from the EU. This agreement allows the transition period to be extended beyond 2020 and establishes that the United Kingdom will remain in a customs union with the EU if no agreement is reached on the future economic relationship between the two parties during the transition period. The latter is a particularly positive element since it means that, if no agreement is reached during that period, the instability would be mitigated by the fact that the United Kingdom would remain in a customs union with the EU by default. Now the two parliaments must approve the preliminary agreement, which may prove difficult in the case of the United Kingdom due to the fierce opposition of the Eurosceptic wing of the Conservative Party and the Labour leader’s decision to oppose the agreement. The outcome will be known on 11 December when this important vote, which is expected to be tight, is due to take place in Westminster.

In the euro area, the latest indicators suggest a moderate growth rate at the beginning of Q4. Specifically, the composite PMI index for the whole of the euro area, which measures business sentiment, fell to 52.4 points in November, 5 decimal points below the figure for October and the lowest since December 2014. This, together with a somewhat disappointing GDP in Q3 (0.2% quarter-on-quarter growth), has led us to slightly reduce our forecasts for 2018 (1.9%) and 2019 (1.8%). This environment of growth rates that are more moderate, albeit nonetheless healthy, was also reflected in the European Commission’s new growth forecasts. In the autumn update of its economic scenario, the Commission revised its forecast for 2019 down (by –0.1 pp) to 1.9% (1 percentage point higher than our forecast), due to the slower growth expected in the external sector. However, it also noted that the growth of the euro area will continue to rest on the improvements in the labour market and on accommodative financial conditions. With regards to Germany, the disappointing GDP figure for Q3 (–0.2% quarter-on-quarter) confirmed the omens of a temporary slowdown in that quarter due to a negative contribution of net exports and lower car production levels (associated with the new emissions regulations that came into force on 1 September).

Tensions between Italy and the European Commission remain the order of the day. After analysing the Italian Government’s new draft budget for 2019, the Commission determined that Italy is not complying with the EU’s fiscal rules, since it is not reducing its public debt to GDP ratio at the speed that is required. As a result, it decided to kick-start the process for the European Council to implement an excessive deficit procedure against Italy. This procedure would involve a more comprehensive monitoring of the EU’s recommendations on fiscal matters, and it could lead to fines of up to 0.5% of GDP being imposed. Nevertheless, this is a long procedure and the tensions and disagreements between the two parties are likely to persist over the coming months.

The economic indicators in the US show no sign of letting up and continue to point towards significant growth in the last quarter of the year, following a stronger than expected Q3. In October, the manufacturing business sentiment indices (ISM) remained comfortably within expansionary territory (well above 50 points). In the labour sphere, 250,000 jobs were created. This is a very strong figure, especially in a situation with practically full employment. The unemployment rate, meanwhile, remained at a 3.7% (the lowest level since 1969), and wages increased by a solid 3.1% year-on-year. All this reinforces the view that the US economy will begin 2019 with buoyant growth.

New political checks and balances. In the midterm legislative elections for Congress, the Democrats managed to regain a majority in the House of Representatives, while the Republicans retained control of the Senate. As a result, the voices opposing the country’s Administration will gain strength in the second half of President Trump’s term. This will be particularly significant for domestic policy, making it much more difficult for new tax cuts to be approved and establishing greater control over the president between now and 2020.

Japan’s growth has taken a respite with a temporary drop in GDP in Q3 (-0.3% quarter-on-quarter). Although a weak growth figure was expected, due to the disruption to economic activity caused by the floods and the heat wave that hit the country during much of July, the impact has been worse than expected. In the last quarter of the year, despite the impact that the trade tensions could have on external demand, we expect the Japanese economy to return to positive growth rates.

China’s foreign sector is weathering the storm of trade tensions well. Chinese exports (in dollars) increased by a significant 15.6% year-on-year in October, which also represents a slight improvement on the figure for September (14.4%). As such, China’s export sector remains dynamic, including in exports to the US, which have proven resistant despite the tariffs introduced by the US Administration over the course of 2018. The economic activity indicators, meanwhile, continued to support our view that China’s economy will keep moving towards a gentle slowdown over the coming quarters.

Brazil and India: two emerging markets experiencing growth. The GDP of the Brazilian economy rebounded in Q3 with year-on-year growth of 1.3% (0.8% quarter-on-quarter), following the 1.0% growth registered in Q2 (the upswing in growth was favoured by the fact that a major lorry driver strike, which had weighed down activity in the previous quarter, came to an end). The Indian economy, on the other hand, continues to show strong growth. In Q3, its GDP growth stood at an impressive 7.1%, albeit somewhat lower than that expected by analysts’ consensus (7.5%) and lower than that of Q2, which was exceptionally high (8.2%). 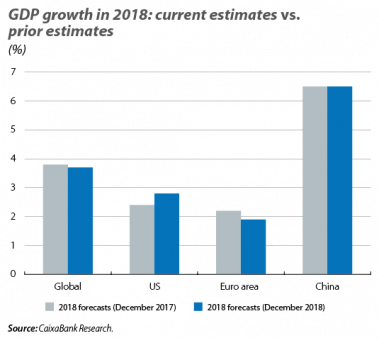 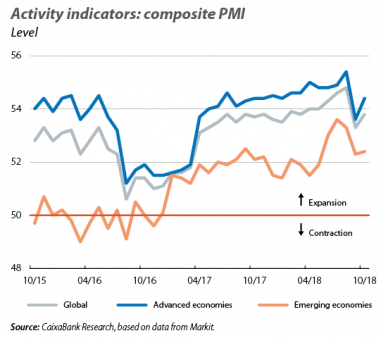 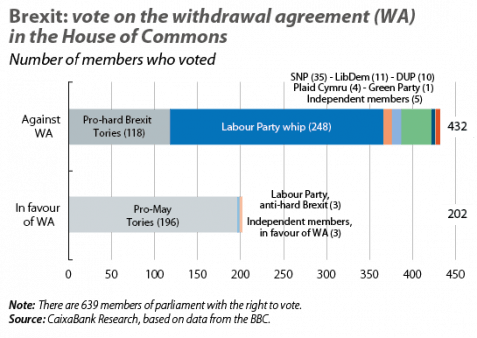 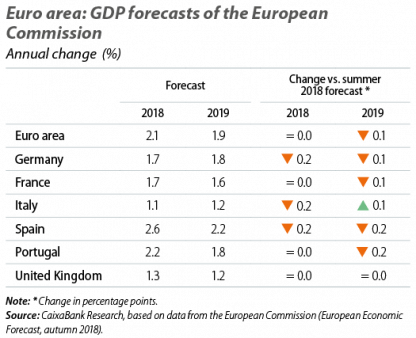 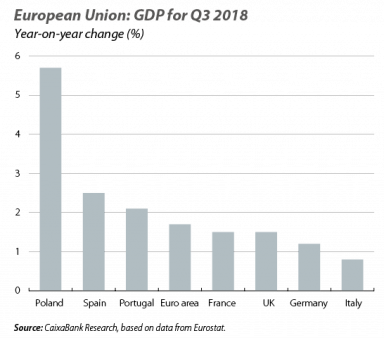 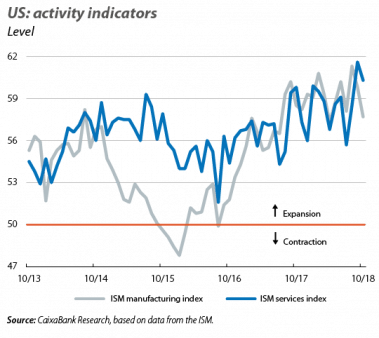 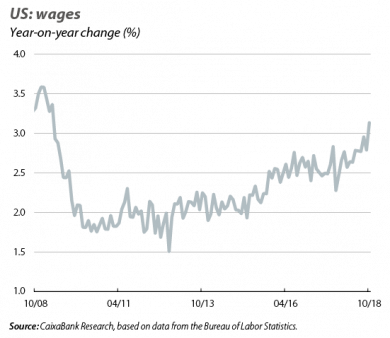 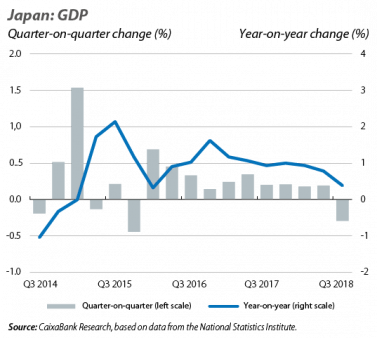 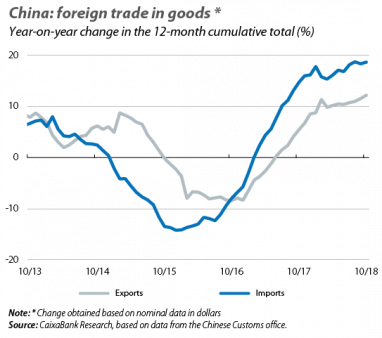