The recovery in Spain: a qualitative step forward

The outlook for 2016 is favourable for the Spanish economy. The projections of most international organisations place Spain at the head of the larger European countries with GDP growth forecasts ranging between the IMF's 2.5% and the government's 3.0%. Our forecast of 2.7% is based on domestic demand continuing to drive growth although losing some of its strength, with foreign demand starting to contribute positively to growth. Although this growth figure is somewhat lower than the one expected for 2015, 3.1% according to our forecasts, we must remember that temporary supports such as low oil prices have been decisive in achieving the current rate of growth. In 2016, as the impact of these supports diminishes, the speed of growth is likely to moderate. However, the underlying factors supporting more balanced growth in the long term will gradually come to the fore. After a year which has undoubtedly been exceptional both in terms of growth and also for job creation, we predict that 2016 will not be as brilliant in quantitative terms but will be good in qualitative terms. This article looks at those elements we expect to support the consolidation of Spain's economic growth in the coming year.

One initial underlying factor that has been sustaining the economic recovery and will pick up steam in 2016 is bank credit. Demand for credit will increase as the deleveraging carried out by households and companies, which had been restricting growth in consumption and investment, is now at a very advanced stage. The private sector's debt ratios will continue to fall to more sustainable levels but this drop will be compatible with higher growth in new loans as we also expect household disposable income and corporate earnings to grow more quickly. Moreover not all agents have the same level of debt: those with credit capacity and profitable projects should be able to resort to loans to consume and invest. On the supply side banks are also in a better position to grant loans than in the past, thanks largely to the restructuring and consolidation of the industry which has helped to strengthen the solvency and liquidity of the remaining banks. The vitality of credit can be seen in the most recent data on new operations: loans to households for consumption and to companies for amounts below 1 million euros (usually requested by SMEs) grew by 19.6% and 14.6% respectively between January and September compared with the same period in 2014, while mortgage loans, which took longer to pick up, have recently become the fastest growing segment. The ECB is also implementing more monetary stimuli which will encourage easier financing conditions.

A second factor that will boost Spain's economic performance in 2016 is the real estate sector which, after eight years of adjustment, will once again contribute positively to growth. Demand for housing has already shown clear signs of recovery during 2015 thanks to the influence of several factors including the creation of more than half a million new jobs and the positive impact this has had on household income and confidence in general, as well as better access to credit, as mentioned above. Moreover house prices grew again in 2015 after six years of contraction, which might have opened the floodgates for demand that had been postponed until the housing price adjustment had been completed. However, although investment in non-residential construction picked up in 2015, especially thanks to tenders for public works in the first half of the year, residential investment was still sluggish due to the high stock of residential properties for sale. With a view to 2016 we expect this to wake up. As this stock of residential properties is distributed very unevenly throughout Spain, a certain lack of housing can already be observed in some zones where there are most sales (see the Focus «The upswing in demand for real estate is stirring activity in construction» in MR11/2015). Consequently, residential construction will increase considerably in order to meet the growing demand in these zones, so the rate of growth of investment in residential construction will speed up from 3.5% in 2015 to 6.1% and its contribution to GDP growth will increase by just over 0.1 pps to 0.3 pps. These figures are very significant when compared with the negative contribution of 0.9 pps posted, on average, between 2008 and 2014. Given this situation we expect the trend in house prices to vary greatly between regions and temporary upward pressure can already be seen on house prices in those zones where the number of new builds are not meeting the demand. Naturally it is not advisable to return to the pattern of growth of the past but, for the time being, there are no signs that this is the case: construction is now concentrated in those regions that need housing.

In any case the improvement in the quality of economic growth will come from the structural reforms implemented over the last few years. In 2016, jobs will continue to be created at a good rate, partly thanks to the greater flexibility introduced by labour reforms although Spain's high unemployment will ensure wage rises are contained. We therefore expect the recovery in domestic demand to be supported by a larger number of people in employment and not by any significant increase in wages per worker. This will help to maintain the gains in competitiveness achieved over the last few years although it should be noted that the improvement in unit labour costs compared with Spain's trading partners cannot be taken for granted. Rather it is vital to continue implementing structural reforms to preserve the country's competitive position internationally. It is true that, in the short term, low oil prices and the euro's depreciation are helping to correct the external imbalance. With a view to 2016, while we expect oil prices to gradually recover the euro is likely to depreciate even further given the ECB's readiness to adopt greater monetary stimuli as the Fed begins its monetary normalisation. However, when the exchange rate stops helping, further reforms will be needed in both the labour and product markets to make them more efficient, focusing on innovation and training for the unemployed. In fact, given the length of time required for structural reforms to take effect, accommodative monetary policy should be seen as providing some breathing space for their implementation.

We must not forget that one of the greatest vulnerabilities of Spain's economy is its high international debt position and that, to push this down to sustainable levels, the country must continue to make gains in competitiveness and increase its current account surplus. It is also crucial for international investors to remain confident in the Spanish economy's capacity for growth in order to attract even more foreign capital and investment. In this respect one domestic risk that might affect economic activity is political uncertainty. Greater parliamentary fragmentation could make it difficult for far-reaching structural reforms to be adopted and for fiscal stability to be achieved.

However, the greatest risks facing Spain's economy come from outside its own borders. The main risk is a sharp slowdown in growth in the emerging countries although the country's economic activity seems to have managed to withstand the lower growth recorded in 2015. One good indication of this is the fact that the drop in industrial orders from outside the euro area has been more than offset by an increase in European orders. Although most of the emerging countries have a relatively balanced macroeconomic situation and enough margin for economic policy to tackle any eventualities (see the article «Outlook and doubts for the emerging economies» in this Dossier), of concern is the delicate situation faced by some of the main Latin American countries as the Spanish economy has strong connections with this region. Although commercial ties are moderate (Spain's exports of goods and services to Latin America account for around 7% of all the country's exports), direct investment is very strong. Specifically 33.3% of Spain's direct investment abroad is located in Latin America and, in 2014, the region generated 37.4% of the country's investment revenue received from the rest of the world.1

In conclusion, in 2016 we should witness underlying factors taking over and boosting growth in the Spanish economy. The structural reforms implemented are starting to produce results but we need to continue shoring up the foundations before the next storm hits and the risks hovering over the economy are far from trivial. 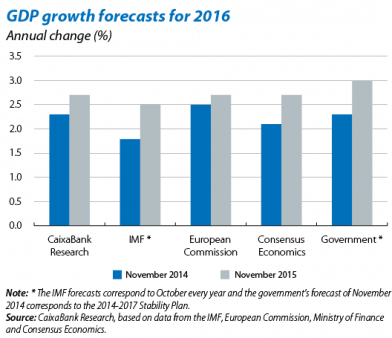 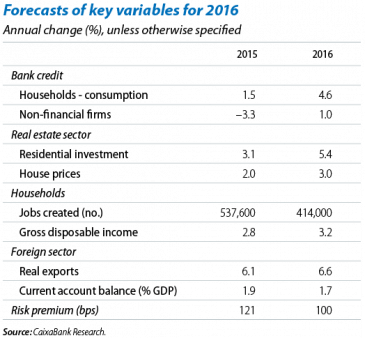