Risks in the euro area continue to decrease

A summer of contrasts in international financial markets. The upside is the good tone of the markets in the euro area, with the latest figures looking positive and political calm. The downside is the deterioration in the financial conditions of emerging countries. For its part, the USA is going through a phase of relative calm but with investors on the defensive awaiting the decision of the Federal Reserve (Fed) on 18 September. At the end of August, events in Syria caused an outbreak of widespread instability which is subdued for the time being but could lead to greater problems.

The reduction in stimuli announced by the Fed continues to grab the attention. At its meeting on 31 July, a large majority of the members of the Fed's Monetary Policy Committee agreed on the need to reduce its bond purchases (or tapering, in the jargon) before the end of the year but did not provide any information regarding the date on which this would start or its scope. According to the consensus of analysts, September will be the month chosen. We need to remember, however, that the Fed is now basing its evaluation of the recovery prospects for the economy and labour market on figures that are somewhat less positive than a month ago, so we cannot rule out this decision being postponed until its meeting in October or December. Speculations on this apparently minor issue merely prolong concern among investors, curbing their intentions to buy, both bonds and equity.

Yields on US public debt have reached their highest level in two years after the additional upswing observed over the last few weeks, due to the uncertainty regarding tapering. This increase has been greater among longer term bonds
(10 years) than shorter term (2 years) and 10-year bond rates are now close to 3%. At the same time, of note is the rise in US mortgage rates, also at their highest in two years, leading to the first complaints from agents in the sector. This deterioration in the debt markets has been accompanied by corrections in US equity. Once the Fed dispels the current doubts these yields are likely to correct part of their recent rise (although the medium and long-term trend is moderately upward) and Wall Street will see gains again.

Financial turbulence is increasing in the emerging regions. Capital outflows continue, albeit at a slower rate than in June, and the effects are starting to be felt keenly by the emerging currencies, especially in those countries with large imbalances. The hardest hit have been the Indian rupee, the Brazilian real and the Turkish lira, although those of other, more solid countries such as the South African rand and the Mexican peso have also been affected. This issue, which is dealt with in more detail in the Focus «Capital outflows in emerging countries», highlights the  vulnerabilities affecting a large part of the emerging block, within a context of poorer prospects for global liquidity and a shift in the appetite for risk. Emerging stock markets have posted considerable losses although they have not  been as harshly punished as the currency markets. The volumes of corporate bonds issued have also fallen sharply and credit spreads have widened.

The authorities of the emerging economies are reacting quickly in an attempt to stop their respective currencies from depreciating. The measures adopted are broad and diverse throughout the emerging economies: exchange controls, direct intervention in the foreign exchange markets and even hikes in official interest rates (for example, in Brazil and Indonesia). Particularly worrying are the cases of India and Indonesia whose levels of international reserves are falling quickly while their respective currencies, far from stopping, are continuing to depreciate. This episode of instability in India is reminiscent of the crisis suffered by the Asian country in 1990, which required intervention by the IMF due to the collapse in its level of reserves. In addition to correctly applying the aforementioned emergency measures, it seems clear that such vulnerable emerging countries also need to tackle the structural reforms that will help them correct their imbalances and boost growth. We expect this to happen and the positive sentiment of international investors to recover accordingly.

Risks in the euro area continue to decrease thanks to a more benign financial environment and improved business indicators. As explained in more detail in the Focus «The ECB: relatively vague "forward guidance"», at its July meeting the monetary authority announced that interest rates would remain low for an extended period of time. This clearly accommodative stance by the ECB, which contrasts with the Fed's plans to progressively withdraw monetary stimuli, helps to explain the satisfactory developments in the region's financial conditions. Moreover the core economies, particularly Germany, are posting solid growth in their respective domestic demands, resulting in notable improvement in the foreign sectors of the southern economies, particularly Spain. Given this situation, the risk premia of the periphery countries have followed a downward trend in the summer, easily wiping out the increases caused by Portugal's political tensions in July. Of note is the good performance of Spain's spread with the German bund, falling to 250 b.p. but picking up slightly at the end of August due to the Syrian conflict. However,  although this narrowing of spreads is cause for satisfaction, we must not forget that it is largely down to the rise in yield of the German 10-year bund.

The outcome of the German elections is key for the euro area's political and institutional solidity and its markets. The German elections will be held on 22 September, a very important date for the democratic validation of the process of refounding the EMU in which we are currently immersed. The polls predict a comfortable victory to the coalition led by Angela Merkel, a circumstance that seems to please investors. Constructive statements made by senior members of the German government regarding the third bail-out package for Greece, as well as praise for the reforms undertaken by countries such as Spain, are a factor that is contributing to the good tone of the region's financial markets. However, we should closely monitor events as the elections approach and the results are announced, in case there are any unforeseen destabilising elements.

The stock markets are providing a mixed bag of fortunes depending on the country and sector. There has been an extremely clear difference between western and emerging stock markets. The good performance of US corporate earnings has boosted the S&P 500 and Dow Jones indices, reaching historical peaks at the beginning of August. However, due to previously mentioned factors (tapering and Syria), the final part of the month saw a correction that does not necessarily mark the start of a downward slide. The profile has been similar In Europe but with a more favourable cumulative balance. The Ibex stands out for the best relative performance compared with its European peers, with gains of around 10% since the end of June. At a sector level, the best performances in Europe were to be seen in banking and the oil industry with defensive sectors (such as pharmaceuticals) and airlines lagging behind. The banking sector is the key to this upward trend continuing in European indices, a circumstance for which favourable macro and microeconomic conditions are consolidating. In Japan, the stock market has moved within a lateral range, not without high doses of volatility.

The euro has gained against the dollar due to positive surprises in the euro area's latest figures, pointing to sustainable improvement. Specifically, the euro-dollar exchange rate has moved towards the 1.33-1.34 zone; in other words, close to the euro's highest level in the last 18 months. This movement should not go any further but rather we expect there to be a slight appreciation in the dollar from its current levels in the medium and long term due to the monetary normalization process in the US. For its part, the yen has once again started to appreciate slightly against the dollar, starting in May.

Upswing in commodity price, led by gains in Brent oil, up by 15% since July. This is attributable, on the one hand  and as a key factor, to the reduction in the volumes of crude supplied by Iran and Nigeria and, on the other, to the worsening of the Syrian conflict. This upward shift in oil prices will moderate in the medium term as tensions shift. Gold, silver and copper have posted moderate gains, although they have not managed to counteract the sharp losses seen this year. The recovery in the emerging block should support a gradual recovery in most commodity prices, especially the food segment. 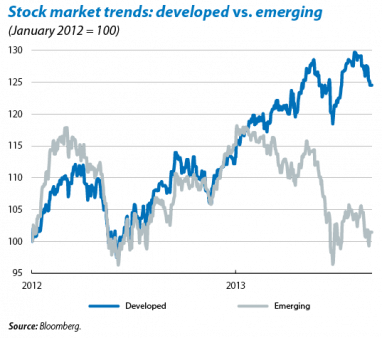 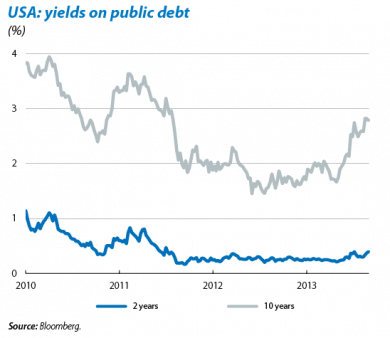 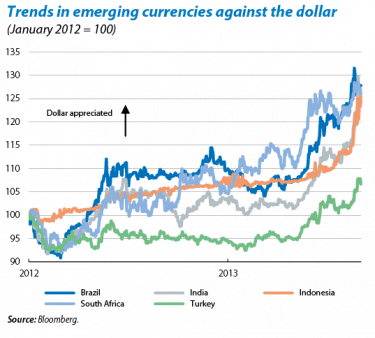 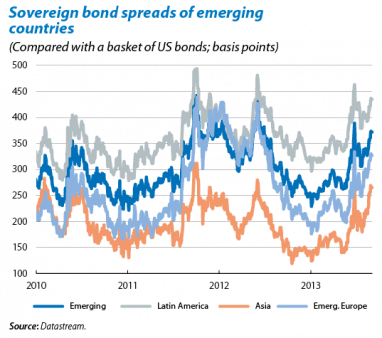 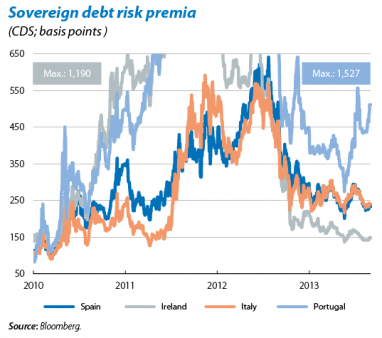 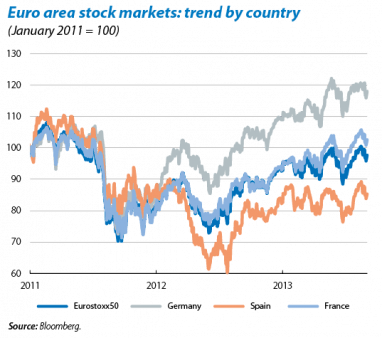 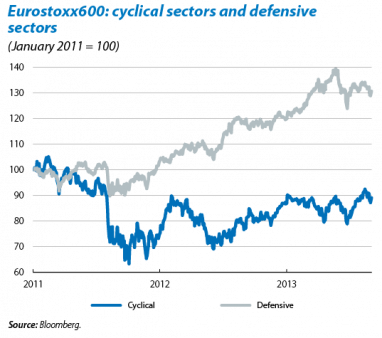 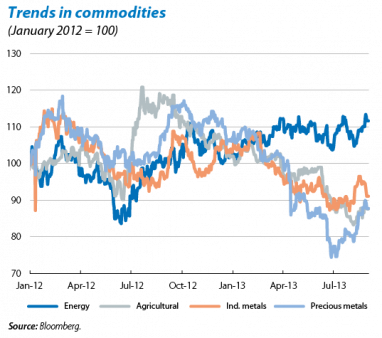