Slight acceleration in world growth in 2016

The global economy's growth consolidates in 2016 but downside risks remain. CaixaBank Research's main scenario for 2016 is 3.3% growth for the world's economy, a little above the 3.1% of 2015, led by some emerging countries that will grow slightly above the figures posted in 2015 (4.3% compared with 4.0%) and by the consolidation in growth for the advanced countries, which will continue the trend that started last year (1.9%). The main sources of risk are, firstly, the high and growing level of global debt; secondly China's difficulty in ensuring a soft landing for its economy in a context of heavy borrowing and a change in its production model; and, lastly, political instability in key countries is also an outstanding element in the balance of downside risks, in particular the deterioration in Brazil's situation and uncertainty regarding the UK's Brexit.

The International Monetary Fund (IMF) slightly reduces its global growth forecasts. The institution has placed world growth at 3.2% in 2016 and 3.5% in 2017 (previously 3.4% and 3.6%). Given this weaker situation, IMF has underlined, more clearly than on previous occasions, the need to carry out structural reforms both in the advanced and emerging countries. However, unlike its January Economic Prospects report, it does not see the Fed's interest rate hikes as critical, assuming this will be very gradual. By country, the US continues to lead the recovery of the advanced economies (2.4% in 2016), the forecast for the euro area stands at 1.5% and the estimate for Japan predicts a weak 0.5% (and –0.1% in 2017). Among the emerging economies, the institution improved its expectations for China a little (6.5% in 2016 and 6.2% in 2017) albeit with a downside risk, but worsened the declines predicted in 2016 for Russia (–1.8%) and Brazil (–3.8%).

The United States' GDP weakens in 2016 Q1, albeit temporarily. GDP grew by a moderate 0.1% quarter-on-quarter in Q1, below the 0.3% predicted and the figure for 2015 Q4 (1.95% year-on-year). By demand component, the slowdown in GDP growth was due to negative contributions by non-residential investment, to the component of inventories and a further decline in exports, probably affected by the strong dollar. Among the positive figures, residential investment grew by a solid 3.5% quarter-on-quarter and private consumption (which accounts for close to 70% of GDP) by 0.5% quarter-on-quarter. Moreover, in the coming quarters the negative effect of the inventories component should reverse and give way to a positive contribution.

Domestic demand will drive the US expansion for the remainder of 2016. Economic growth will be supported by an increase in private consumption, greater public expenditure and a considerable rise in residential investment. The consumer confidence index produced by the Conference Board stood at 94.2 points, above its historic average (93.5 points), while figures for the real estate market indicate a strong recovery in the sector. In March just over 1 million residences were started, a figure that comes close to the historic average (1.3). Different price indices (both the Case-Shiller and the index produced by the Federal Housing Finance Agency) show solid growth, helping residential investment to continue being an important factor for economic growth in 2016.

Improvements in the labour market will support domestic demand. 215,000 net jobs were created in March, in addition to the good figures posted for February (245,000 after the upward revision). Unemployment rose by 0.1 pp to 5.0% due to the higher participation rate, which has risen in cumulative terms by 0.5 pps since November. This, together with less under-employment (involuntary part-time work due to economic reasons), which has fallen by more than 3 million people since September 2011, and the increase in hours worked, suggests that the improvement is solid.

Inflation will pick up over the coming months in spite of March's more subdued figures. Specifically, core inflation stood at 2.2% in March, 0.1 pp below February's figure. In month- on-month terms (with the series seasonally adjusted), the core CPI increased by 0.1%, the smallest rise since August. For its part the general CPI grew by 0.9% year-on-year, also 0.1 pp below February's figure. However, inflation will have passed the 2% mark by the end of year thanks to the gradual disappearance of the base effect caused by the sharp drop in oil prices and to greater wage pressure due to the improved labour market. Given this situation, at its April meeting the Fed kept the Fed funds rate target within the range of 0.25%-0.50% and continued to use a markedly dovish tone in its communication, although the risks are now slightly less downside.

The Bank of Japan makes no move in spite of the moderation in economic activity. CaixaBank Research's forecast for Japan in 2016 has been revised downwards, going from GDP growth of 0.9% to 0.6% due to the poor performance shown by private consumption, weak exports (particularly to China and the US) and a greater appreciation of the yen than expected. In spite of this weak environment, at its April meeting the Bank of Japan surprised the market by refusing to change its rate of quantitative easing, currently at 80 trillion yen per year.

Structural reforms are increasingly necessary. Consumption, the largest component of GDP, is looking very weak. Entrepreneurs do not expect solid growth in the medium term either and have not raised wages, resulting in low consumption. The expectations of consumers and entrepreneurs would improve with credible pre-growth reforms, such as putting an end to the dual nature of the labour market which particularly harms women's wages, and also by encouraging investment.

China continues with a soft landing for its economy in 2016 Q1. China's GDP grew by a significant 6.7% in 2016 Q1 (6.8% in 2015 Q4), slightly below our forecasts but in line with those of the market. March's activity figures, which were published together with the GDP data, also showed some improvement in the final part of Q1. The industrial production index rose by a considerable 6.8% year-on-year, more than the 5.4% for the aggregate figure of January and February. This monthly improvement partly offsets the weak quarter- on-quarter growth of 1.1%, below the 1.5% posted in 2015 Q4. All this should calm fears of a possible hard landing for the Asian giant.

The change in China's model of growth can be seen in the country's Thirteenth Five-Year Plan (2016-2020), based on five pillars of development: innovation, coordination, protecting the environment, inclusion and openness. Of note for the pillar of innovation is the promotion of strategic industries and new manufacturing technologies, the modernisation of the agricultural sector, which employs almost half the labour force, and institutional reforms to improve the efficiency of state conglomerates. For the pillar of coordination, the aim is to promote joint actions between regions and achieve a balance between rural and urban zones. Lastly, with regard to openness, liberalising the financial account will be crucial.

Uncertainty worsens in Brazil. Latin America's largest economy has an unbalanced macroeconomic situation (high inflation with public account deficits) which leaves little room for expansionary measures. In addition to this situation is the political uncertainty resulting from the potential impeachment of President Rousseff, a process which has already gone through Congress and might continue for another six months. Without doubt the country's high political uncertainty is a determining factor in its expected drop in GDP for 2016 (–3.4%), which had already shrunk extensively in 2015 (–3.8%).

Oil moves away from its minimum levels at the start of the year. Brent oil rose to above the benchmark of 40 dollars/barrel throughout April. The failure of numerous OPEC producers (and some non-OPEC members) to reach an agreement in Doha does not seem to have affected the upward trend in the price of crude to any great extent. Regarding the rest of the commodities, most of the industrials have also posted notable gains, partly due to a temporary readjustment in supply (due to steel plants being closed in China). 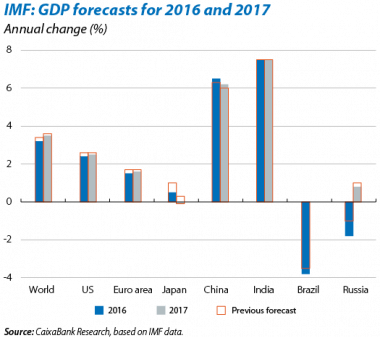 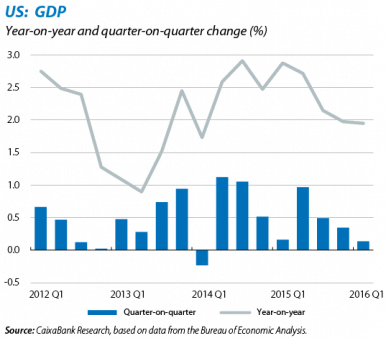 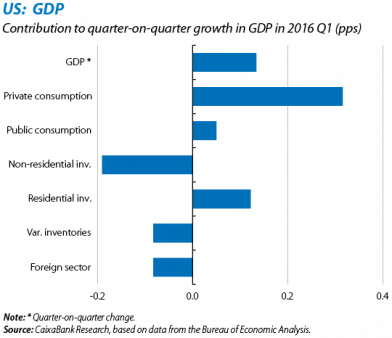 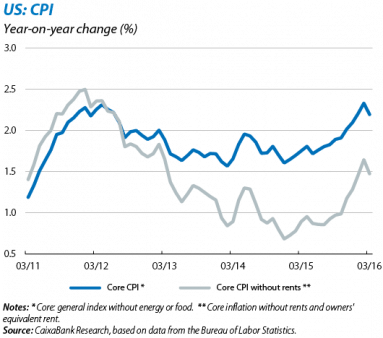 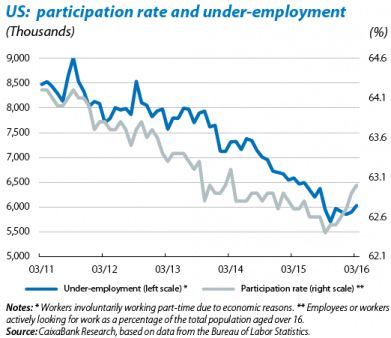 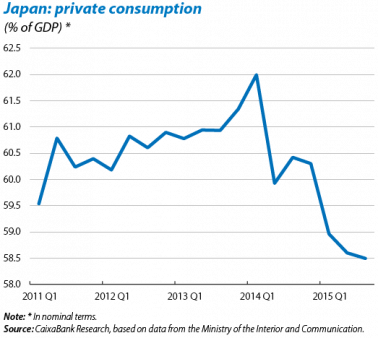 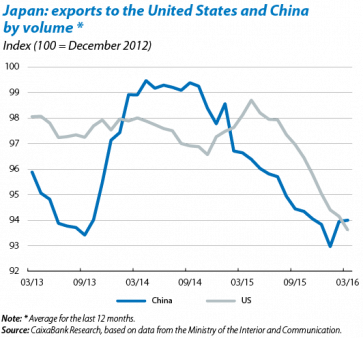 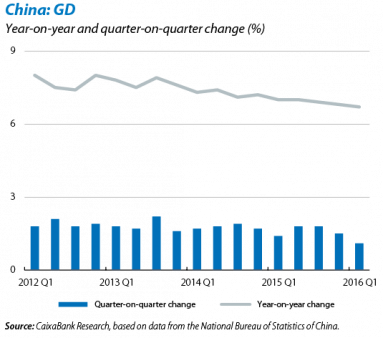 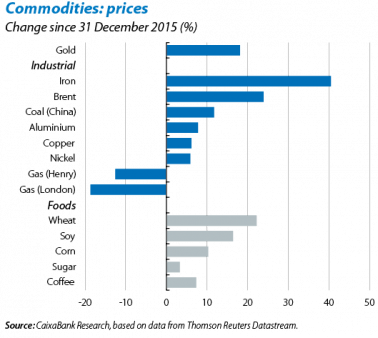