Global economic activity indicators continue to post notable increases in Q3 in spite of some sources of uncertainty. In August, the global purchasing manager index (PMI) for manufacturing was in a comfortable expansionary zone at 54.7 points. This was due to an improved aggregate figure both for the advanced and for the emerging economies. This endorses the CaixaBank Research scenario which predicts that world growth will speed up moderately to 3.5% in 2017 (3.2% in 2016). Nevertheless, the balance of global risks is still tilted slightly to the downside due to uncertainty. In geopolitical terms, tensions with North Korea have worsened over the past few weeks. On the political front, the CDU (Angela Merkel’s party) winning the German elections has reinforced the European project. However, the narrowness of this victory means it could take weeks of negotiating to achieve a coalition. Finally, on the other side of the Atlantic, natural disasters have battered the Caribbean islands, Mexico and the US.

Hurricanes Harvey and Irma will have a temporary effect on US economic activity. Beyond the number of deaths, initial estimates for the economic costs in Texas and Florida exceed USD 100 billion (around 0.6% of GDP). These natural disasters will impact US GDP growth although the effect is expected to be slim and short-lived. The disruption to economic activity in August (in Texas) and September (in Florida) will result in slightly lower Q3 GDP growth than expected a few months ago (around 0.6 pp lower in quarter-on-quarter and annualised terms). On the other hand, the reconstruction of lost capital is likely to support slightly higher GDP growth than previously estimated over the coming quarters. The industrial production index, retail sales and different real estate indicators all posted poorer figures in August compared with previous months. On the other hand, economic confidence indicators (ISM, consumer confidence) have remained relatively stable at
a high level.

In spite of the expected temporary slowdown, the Fed keeps to its road map for monetary normalisation. After maintaining to 1.00%-1.25% the interval for the fed funds rate at its September meeting, the institution presented a largely unchanged macroeconomic scenario. This still indicates another hike at the end of the year and three more in 2018, in line with CaixaBank Research forecasts. The Fed also announced it would start reducing its balance sheet in October. It will stop reinvesting USD 6 billion of public debt and USD 4 billion of debt and mortgage-backed securities per month.

The Fed’s decision is endorsed by a strong labour market and rising inflation. 156,000 jobs were created in August. Although this figure is lower than previous months, it is still considerable given the mature stage of the US economic cycle. By way of example, the US economy has posted positive growth rates for the last eight years, the third longest expansionary period in its history. The unemployment rate remained almost unchanged at 4.4% while wages increased by an appropriate 2.5% year-on-year. Considering this mature context, inflation has been weaker than expected. Even the Fed Chair, Janet Yellen, mentioned at the monetary institution’s last meeting that the latest inflation figures seem to be based on factors relatively unrelated to the country’s good economic performance. She even classified the trend in inflation as a «mystery». In any case, in August inflation rose to 1.9%, 0.2 pp above July’s figure and also higher than most analysts’ predictions. Core inflation remained at 1.7%. Over the coming months we expect inflation to rise slightly given the end of economic slack, weak dollar and disappearance of temporary factors in some CPI components that have pushed down inflation over the past few months (especially the price of wireless communication services).

Tax reform is finally underway. The White House has presented its tax reform proposal. This includes lowering taxes both for individuals and companies. The maximum marginal rate for individuals would fall from 39.6% to 35% while going from 35% to 20% for companies. But this proposal is merely the starting point for debate in the US Congress. Discussions will continue over the coming months and some adjustments might be made, although we do not expect them to be significant.

Early elections called in Japan. The Japanese Prime Minister, Shinzo Abe, has called early elections to gain a stronger mandate given the growing threat from North Korea and his aim to continue with far-reaching structural reforms. Abe particularly stressed the need to increase spending on education to improve the country’s productivity. He also endorsed greater pressure on North Korea with the support of other nations.

Japan continues to make good economic progress in spite of lowering its GDP estimate for Q2. Economic activity grew by 0.6% quarter-on-quarter in Q2. This means the country has posted six consecutive quarters of positive growth, a first since 2006. Growth was supported by private consumption and higher investment (especially public). Nevertheless, and as tends to be the case with Japanese data, the Statistics Office substantially revised its GDP growth figure for Q2 in its second estimate. This revision was downward: from the previously estimated figure of 1.0% to the aforementioned 0.6% (and from 2.1% in year-on-year terms to 1.6%). Although this progress is still good, the lower growth rate has led CaixaBank Research to reduce its annual estimate for 2017 (now at 1.4%).

Emerging economic activity remains strong although risks persist. As we have already mentioned, the emerging countries are enjoying considerable economic growth in general. This can be seen in the IIF growth tracker which estimates the aggregate increase for the main countries at above 5% in Q3. In this context, portfolio inflows for these economies continued to record considerable volumes of foreign capital in August.

China’s latest rating downgrade, however, is an indication of one of the biggest risks at a global level: Chinese debt. Following Moody’s downgrade a few months ago, S&P decided to cut the country’s rating from AA– to A+ due to its high and growing level of debt. Over the past eight years, Chinese debt has grown by more than 100 pp of GDP. At the beginning of 2017 it reached 260% of GDP, mainly due to heavy corporate leveraging. Nevertheless, China is still on course for a soft landing in growth terms. The Asian giant posted more moderate economic activity data in August
but these figures were still considerable. Retail sales grew by 10.1% (10.4% in July) while industrial production was up by just 6.0% (0.4 pp less than July). This is due to the government’s intense anti-pollution campaign, resulting in a reduction in the production of base metals and cement.

Brazil’s economy is still slowly exiting the recession while its political sphere continues to be a source of concern. The Latin American country saw its second consecutive quarter of quarter-on-quarter growth in Q2 (0.3% in year-on-year terms compared with -0.4% previously). In quarter-on-quarter terms, and from the demand side, the two key components supporting this weak exit of the recession are private consumption and exports. Given this situation, the latest charges filed against President Temer by the Supreme Court endorse the scenario proposed by most analysts: the President is likely to be replaced but early elections are not expected.

Turkey continues to post notable growth in Q2. GDP grew by 5.1% year-on-year, in line with Q1 growth and supported, among other factors, by a strong rise in credit. By demand components, Turkey’s dynamic performance was largely helped by solid domestic demand (higher investment and stable private consumption). It is also noteworthy that exports contributed positively to growth. Nevertheless, CaixaBank Research expects the Turkish economy to lose momentum towards the end of 2017, although ending the year with higher than expected growth given the dynamic first six months (4.4% for 2017 as a whole). 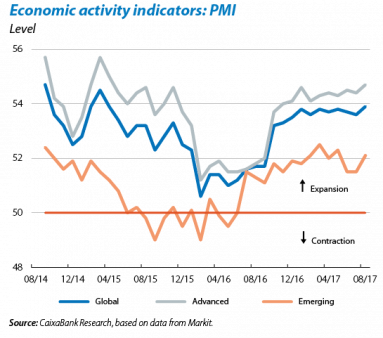 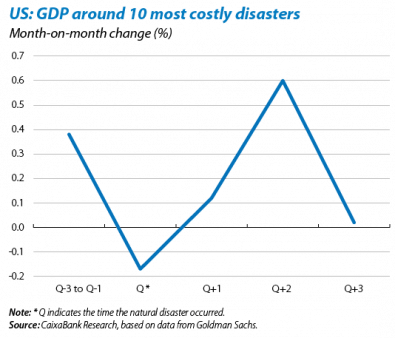 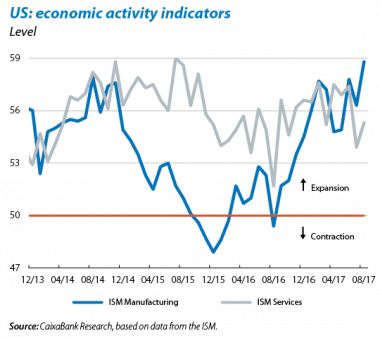 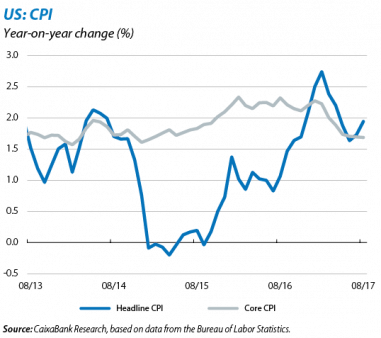 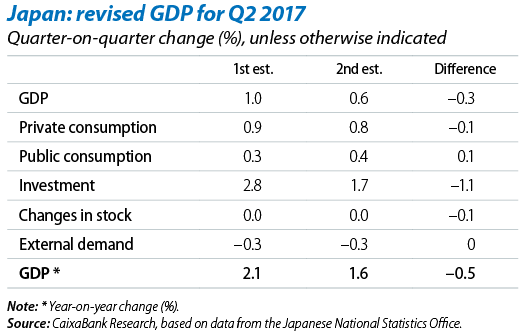 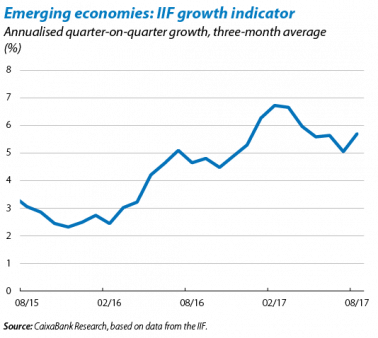 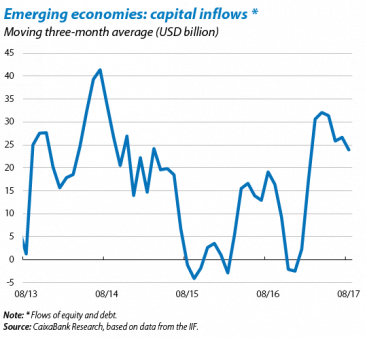 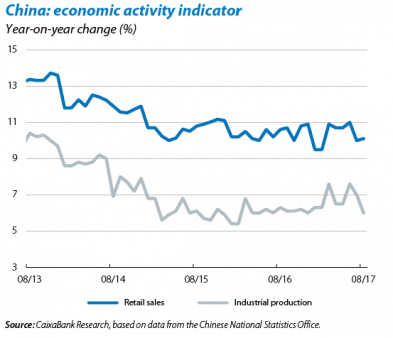 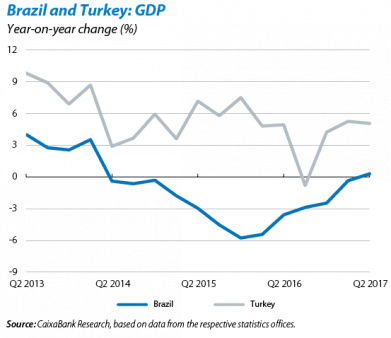