Turkey: difficulties in the short term

With an 18% depreciation of the Turkish lira against the dollar since May 2013 and a 24% drop in the Istanbul stock market over the same period, Turkey is one of the emerging economies weighed down by the greatest financial pressure in the last year. Given this situation, we might wonder whether Turkey's economic situation is showing substantially more negative characteristics than other emerging countries. A review of the main macroeconomic indicators points to an answer in the affirmative, given the combination of a hefty current account deficit (around 8% of GDP in 2013) and inflation above 7%. Nonetheless, this is no extraordinary case but is actually similar to countries such as Brazil, Indonesia and South Africa, all punished by depreciations in excess of 15% since last May.

In Turkey's case, these severe macroeconomic imbalances are fuelling doubts regarding its short-term prospects. In spite of an expected slowdown, GDP growth in 2013 Q3 was still a vigorous 4.4% year-on-year (4.5% in Q2). This expansion has been boosted, and to no small degree, by strong growth in domestic private credit, up by 33% year-on-year in Q4 (one year ago the increase was 17% year-on-year). To complete the panorama, and as anticipated, the growth in prices is far from what would be desirable: in January, the CPI rose by 7.8% year-on-year, totalling eight consecutive months above 7% year-on-year. Given this situation, and after delaying its decision for many months, in January the central bank drastically raised the reference rate to 10% (4.5% in December).

Together with this complicated macroeconomic development, Turkey has also started to show signs of political conflict, an uncommon occurrence in previous years. Since the AKP (Islamist party) came to power in 2002, the country carried out far-reaching reforms. After several years of this process being widely supported by most of society, in 2013 signs of opposition and political exhaustion started to appear, both in the government itself and also in the form of external movements. The noise accompanying these episodes makes it difficult to predict possible changes in political direction in the longer term and has sharpened the volatility of episodes such as those occurring in spring 2013 and also last January.

Given the unfortunate coincidence of political tensions and macroeconomic imbalances, it must be concluded that Turkey is indeed one of the emerging economies that will require particular attention over the coming months. Although we believe that 2014 is very likely to end much more favourably than appears at present, due to the imbalances accumulated, a slowdown in activity is almost inevitable. However, given the precedents, we believe that this might be a short-term process and that, in 2015 the economy could stabilise its rate of activity. Such a slowdown should help to reduce the current account deficit towards the end of 2014. However, the inertia of high inflation could remain until well into 2015. Similarly, this year will see greater clarification in the political situation and real support for the Islamist modernisation agenda, as local elections (March) and presidential elections (August) will be held, as well as a probable constitutional referendum. Once the uncertainty clears up, the view should reappear of an emerging economy with good long-term prospects, resulting in a high growth potential of around 5%. 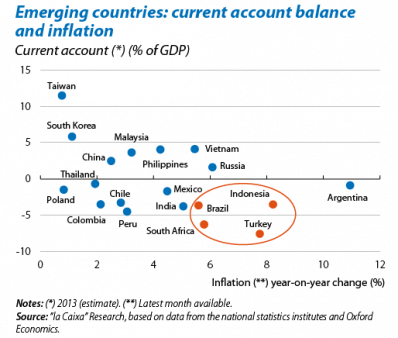 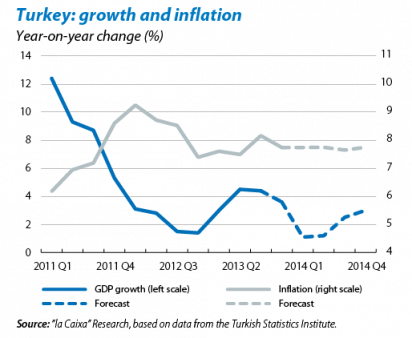