2015: monetary policy continues to set the tone for the financial markets

Monetary policy has played a vital role in financial market trends throughout the last few decades and this influence has become even greater, if possible, after the crisis that started in 2007. The extraordinarily accommodative monetary strategy implemented in unison by the main central banks helped to re-establish liquidity worldwide, which has ultimately provided a powerful boost for the recovery in the markets. It therefore comes as no surprise that a large part of attention is now focused on how these monetary authorities will act with a view to 2015. And some changes are expected.

In fact, as explained in the article «Global recovery is underway, with the permission of the US and the euro area» in this Dossier, for the first time in several years the monetary policies of the main central banks are going to be significantly different. Given the signs of improved economic activity in their respective countries, we can expect both the US Federal Reserve and the Bank of England to embark on their first official interest rate hike sometime in 2015, after ending their asset purchases in 2014. This shift in strategy contrasts with the greater monetary stimuli announced both by the European Central Bank and the Bank of Japan, given the weak outlook for their economies. The People's Bank of China, on the other hand, will continue its policy of «fine-tuning», at present leaning towards accommodation but far from the degree adopted by its Western peers. This new monetary scenario raises questions regarding the prevailing liquidity conditions in global financial markets in the future: will they be more restrictive or more lax; will they differ depending on the country and type of financial asset? The answers will largely depend on two factors: the volume of funds injected by the different central banks into system (which should be seen as «official liquidity») and investors' degree of risk aversion (crucial for the fluidity of private transactions).

With regard to the first factor, the ambitious figures involved in the new quantitative easing programmes announced by the ECB and Bank of Japan allow us to predict a notable increase in 2015 in the aggregate balance sheet of the aforementioned five large central banks. In other words, this variable will return to its upward trend that had halted in 2014 after the dramatic rises seen between 2007 and 2013. In principle, this means that the global monetary system will still be accommodative, even once the Fed raises its interest rates. But in addition to the extent of this overall expansion, the change in composition of the assets through which it will be carried out suggests that the consequences will differ depending on the financial market in question. One clear example is the trend in Europe's covered bond market: the ECB's announcement that covered bonds will be included as eligible assets to increase its balance sheet has already pushed up their price (and reduced their yield), as well as encouraging more bonds to be issued. In a broader view, the divergence between monetary policies is likely to be reflected throughout the range of bonds. Expectations of a relatively imminent official interest rate hike in the US, together with the Fed putting a stop to its purchases of US government bonds, will push up Treasury yields. For instance, according to the forecasts of "la Caixa" Research, we expect the yields on two-year US bonds to rise by about 130 basis points next year. This figure clearly exceeds the 25-point rise predicted for German government bonds with the same maturity, as the ECB is keeping its official interest rates at their all-time low level and inflation expectations in Europe are still highly contained. Taking into account the fact that the sovereign debt of these two countries acts as a risk-free benchmark for other sovereign bonds in their respective currencies, this differential is likely to be passed on to corporate bonds, asset-backed securities, etc. (notwithstanding the corresponding risk premia, mentioned below). And the effects do not stop there. This change in spreads between assets on both sides of the Atlantic also has a very direct impact on the relative value of their currencies. The explanation is simple. The higher return offered by US assets will attract more capital towards dollar denominated assets, pushing up the currency's value against the euro. In line with this argument, the dollar has already become notably stronger over the last few months, going from 1.37 dollars per euro to almost 1.25. The medium-term outlook suggests the dollar will continue to appreciate although much more contained, coming close to 1.20 dollars per euro in the medium term.

At present, the map of macroeconomic risks indicates that the trends described for interest and exchange rates are more likely to sharpen rather than diminish. On the one hand, the US is facing a threat of increasing inflationary pressure, which could force the Fed to withdraw its monetary stimuli faster than originally planned. On the other hand, the euro area runs the risk of continuing to weaken and suffer from deflationary pressures, so the ECB might redouble its accommodative efforts for a longer period than expected. In both circumstances the spreads between the assets denominated in the different currencies will widen, making the dollar even stronger and testing the Fed's resolve to allow greater deterioration in the external competitiveness of the US economy.

The outlook for risk assets will essentially depend on the interaction between the liquidity situation, risk aversion and the fundamental variables for each kind of asset (earnings in the case of shares, the solidity of corporate balance sheets in corporate bonds, the state of public finances in emerging sovereign debt, etc.). Such interaction, always complex, will be particularly so in 2015. In an increasingly interconnected financial world and with fewer restrictions on capital movements, the monetary policy decisions of the main central banks have consequences far beyond their own borders and potentially crucial ones. The willingness of investors to take on risk plays a vital role in how such consequences are passed on. With a view to 2015, several questions still hang over the future scenario that could damage investor confidence and lead them to search for a safe haven in those assets considered to be safer, in turn leading to episodes of tension in those financial markets associated more strongly with risk. One clear example of this was the episode of financial agitation in spring 2013. At that time, fear of the Fed withdrawing its quantitative easing sooner than expected led to significant outflows of capital from emerging countries, resulting in sharp losses in assets as well as a depreciation of their currencies. Although further episodes of increased volatility in 2015 cannot be ruled out (whose triggers could come from monetary normalisation policy, the economic cycle or geopolitical conflicts), we expect the repercussions on emerging markets to be much less than those experienced in the spring of 2013. There are fundamentally two reasons for this greater stability. The first is that investors have learned their lesson from the turbulences in 2013, now leveraging any risk adopted much more effectively. They should therefore react less violently in any future episodes of capital outflows. The second lies in the efforts made to correct imbalances, both internal and external, by a large number of developing countries (especially India), reducing the potential sources of risk to just a few (such as Russia, Brazil and Turkey).

As has been observed in the recent episode of financial tension in October, the stock markets are also strongly affected by fluctuations in investor risk aversion. In this case further episodes of volatility cannot be ruled out as the uncertainties surrounding monetary strategy in 2015 are gradually resolved. However, the context of economic recovery should, in general, support further gains in equity. In the medium term, the European stock markets look most likely to enjoy gains as there might even be some pleasant surprises in corporate earnings over the coming quarters.

In conclusion, the important monetary decisions taken in 2015 will largely determine the trend in global financial markets. Given this situation, it is vital for central banks to adopt an orderly normalisation strategy, accompanied by effective forward guidance that dispels any possible doubts arising along the way. Only in this way will global financial stability be assured. 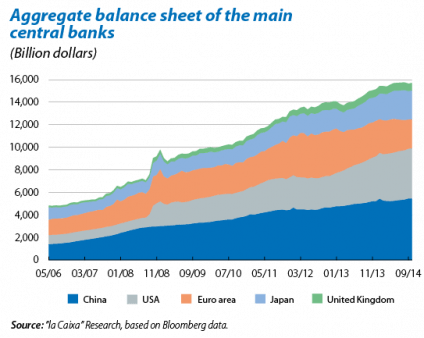 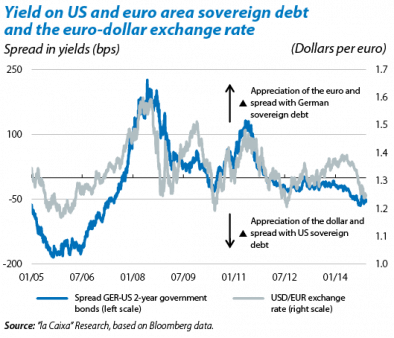