Equities: a market with potential

2014 was a good year for equities at a global level: the MSCI index for World Local Currency with dividends provided gains of almost 10% and, although there were significant disparities between countries and sectors, they have not impaired the overall good performance of the stock market and this situation is likely to continue in 2015.

One initial aspect that must be taken into account is the macroeconomic environment. For 2015, the consensus of analysts and most international bodies agree that the international economy will speed up while global inflation is likely to remain at low levels. In other words, a return to what some, as in the children's tale, call the «Goldilocks economy»: not cold enough to arouse fears of a recession but not so hot as to cause concern regarding inflation. A mild macroeconomic climate has typically been favourable for stock markets but this has now become particularly important as it is crucial to ensuring that a certain decisive factor continues within the financial framework of the last few years: the abundance of liquidity. In spite of the divergent strategies employed by the main central banks, on the whole monetary conditions will remain extremely accommodative in 2015 (the ECB's and Bank of Japan's expansionary measures will take over from those of the Fed), ensuring very relaxed liquidity conditions at a global level. Apart from helping to finance companies and reducing financial costs, this factor also boosts stock markets via the search for yield: investors, unsatisfied with the low interest rates offered on monetary assets and public debt, increase the relative weight of equity in their portfolios. In fact, an increase in capital flows could already be seen from government bonds towards equity markets throughout 2014 and we expect this trend to continue in 2015.

A second notable aspect of the global environment is the fall in commodity prices, and specifically in energy prices. The positive effect of this is twofold. On the one hand it reduces companies' production costs, helping to increase their margins while, on the other, it stimulates household expenditure. Although it also leads to the threat of deflation, this impact should be offset by the accommodative monetary policies, improvement in real wages and revival in credit. Europe's periphery would see the greatest benefit from this effect as it has highest rate of energy imports as a share of GDP while the euro area will also be boosted by an additional third factor, the depreciation of the euro, which will help to improve the revenue received by European firms from exports.

These three key elements in the global environment (liquidity, commodity prices and exchange rates) should all act as a spur to Europe's stock markets. In fact, the consensus of equity analysts expects the increase in earnings per share enjoyed by European companies to be more than considerable. The growth in earnings in the United States is expected to continue being positive but modest, given factors such as rising wage costs. Moreover, the Fed's normalisation strategy could push up dollar interest rates, which would increase the discount rate and therefore reduce share price multiples (P/E ratio, etc.) in the US stock markets. For their part, emerging companies are facing more difficulties in the coming quarters due to the slowdown in growth of their economies, the continued depreciation of their currencies and the fall in revenue from commodity exports. From a sector point of view, and in line with these arguments, all the evidence seems to suggest that those companies most closely linked to the trend in the price of crude oil should be the hardest hit, followed by those whose business is related to commodities. On the other hand, the increase in disposable income thanks to cheaper energy and improved financing conditions should boost share prices in cyclical and consumer sectors such as distribution, retail, transport, airlines and automobiles.

Nevertheless, the risks observed in 2014 that hover over this Goldilocks panorama have also continued. Specifically, geopolitical tensions, the Fed's normalisation strategy, deflationary forces in the euro area and the extent of the slowdown in the Chinese economy still head the list of threats that need to be closely monitored. 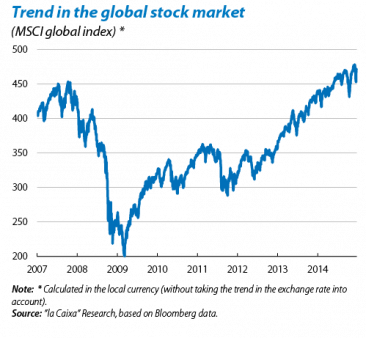