The euro area's monetary policy will continue to be highly accommodative

The markets perform quite well in October, consolidating a positive medium-term trend. The episode of fiscal uncertainty in the USA having been overcome, the Federal Reserve (Fed) deciding to postpone its withdrawal of stimuli, as well as encouraging activity figures from China and the euro area have been the main reasons for the good climate in the markets. Of particular note was the dynamism of the stock markets and especially, once again, the Spanish stock market, as well as improved financial conditions for the emerging block.

Paradoxically, too much complacency has become the main risk factor in the short term. Although this run of good results in the financial markets over the last few weeks is backed by solid fundamentals, we should not abandon caution regarding any setbacks or shocks that may appear (see the Focus «Global financial stability: progressing satisfactorily»). In this respect, the good performance by most financial assets since the end of the summer is leading to signs of exuberance in some areas, particularly in US credit markets. This is likely to impel the Fed to issue warnings in order to halt any possible excess that could jeopardise future financial stability. On other occasions, this kind of intervention (even when only verbal) has led to corrections in risk asset prices.

Political tensions due to the fiscal dispute in the USA had a limited impact on the markets. The partial shutdown of federal government and the tortuous negotiations between Republicans and Democrats to raise the debt ceiling did not make investors too nervous. Proof of this is the fact that the CDS premium (or protection against default) for US debt posted a minimal upswing that also quickly corrected itself. This also happened with the implied volatility index for government debt (which measures the cost of hedging and reflects the concerns of investors), whose upswing was limited in both time and size. Throughout the month, the yield on 10-year bonds fluctuated around 2.60%, in line with the latest news on the fiscal dispute and clues as to the Fed's possible course of action.

Doubts remain regarding when the Fed will start tapering. October's meeting of the Monetary Policy Committee did
not dispel any doubts or provide any clues. As expected, it was agreed to maintain the monthly rate of debt purchases, apparently waiting for further evidence to confirm sustained improvement in activity and employment figures, as well as the resolution of certain doubts or risks. There are several reasons to believe the Fed will begin its monetary normalisation in the first quarter of next year. Firstly, the momentum of the economy has been affected by activity and employment figures that have lost steam compared with the second quarter, apart from the effects of the fiscal shutdown, which are difficult to gauge. Confirmation is required that the US economy has not lost its ability to withstand such knocks and that it is gaining momentum. Secondly, the financial context must stabilise, currently affected by the opposing forces of the trend in mortgage interest rates and the risk of overheating in some corporate bond markets. Lastly, the institutional context must also be taken into account, with Janet Yellen taking over from Bernanke at the Fed as from February. Everything seems to suggest, therefore, that the Fed will not abandon the conservative stance it has adopted and will delay the start of tapering with respect to the plans initially outlined last June.

The financial environment continued to improve in the emerging block in October. Financial conditions in most
of the emerging countries, particularly the so-called «BIITS» (Brazil, India, Indonesia, Turkey and South Africa), are continuing to perk up thanks to capital flows gradually getting back to normal. The Fed's decision to postpone its withdrawal of stimuli and the improved tone of economic activity in the emerging economies themselves (thanks both to domestic and foreign demand) lie behind this improvement. China and India have been clear examples of this more constructive situation. The slightly restrictive slant of the monetary policy adopted by countries such as Brazil and India has also helped, interpreted as a commitment to orthodoxy. Nonetheless, pushing forward with reforms is key to improving long-term economic fundamentals in the emerging regions and thereby enhance financial stability, particularly when the start of monetary normalisation in the USA, albeit postponed, is not too far off.

China is keeping an eye on latent risks on several fronts. The Asian giant's central bank has induced some tension in interbank market interest rates by restricting the extent of its liquidity injections. This seems to be in response to the improvement observed in economic indicators and especially to the rapid growth in credit and real estate prices. The latter have recorded the fastest growth for the last three years in large Chinese cities. Although the risks associated with rapid credit growth and the formation of real estate bubbles warrant a great deal of attention, it is encouraging to note that the Chinese authorities are still vigilant and ready to act when required.

The euro area's monetary policy will continue to be highly accommodative. As the ECB has repeated on several occasions, the fact that the euro area's economic recovery is very fragile fully justifies the institution's loose monetary policy. Moreover, the inflation rate is still falling while the euro is getting stronger. On the other hand, in October the «excessive liquidity» of banks with the ECB fell below the threshold of 200 billion euros which the monetary authority believes is adequate, which might push up monetary interest rates. In this respect, if any upswings in short-term rates were in danger of compromising market stability, the ECB would not hesitate to intervene by adopting new, very long-term liquidity injections (LTRO); although a further reduction in the official interest rate cannot be ruled out either. Once again, a positive monthly balance for Spain's public debt and equity. The favourable situation observed recently has been repeated, boosted by a solid improvement in the perceived risk of periphery sovereign debt and backed by the slow but gradual movement of investors from safe haven assets toward Italian and Spanish debt. The progress being made by Spain particularly stands out: the spread with the German 10-year bund is at levels close to 230 bps while the yield on 10-year bonds fell below 4% in some sessions. Along these lines, the Treasury issued 30-year syndicated debt which was successful in terms of both demand and yield. In the stock markets, the Ibex 35 capitalised on the generally favourable climate and has posted considerable gains since January (in the order of 20% cumulative), now standing at a two-year high. The main players were the sectors of consumer goods and banking. However, towards the end of the month a slight  correction could be seen that might not be over yet. Further gains in the Spanish stock market will have to be accompanied by solid corporate earnings, a circumstance that seems likely in 2014.

Performance in unison with international equity markets. Both the US stock market (S&P 500 and Dow Jones have hit historical highs) and the European and Japanese markets have registered strong gains in their monthly figures thanks to the constructive climate of global financial conditions and the relatively positive trends in corporate earnings. Emerging stock markets have also performed satisfactorily, due partly to their prudent management of fiscal and monetary policies, promoting those factors that «attract» international capital flows. Although there is still a small amount of volatility, possible announcements or messages of a restrictive slant by the Fed and/or Chinese authorities could lead to corrections from the current levels.

Great activity in the corporate credit markets. Issuances of corporate bonds have reached record levels in the USA, specifically in the high yield and syndicated loan segments, denoting some overheating in the sector. In Europe the figures are still below the levels of 2012 although the year's trend is positive. Of note is the good tone shown by non-financial corporate bonds in Spain, achieving their highest volume for the last five years. The positive trend in country risk and perceptible improvements in activity figures underpin this dynamic. 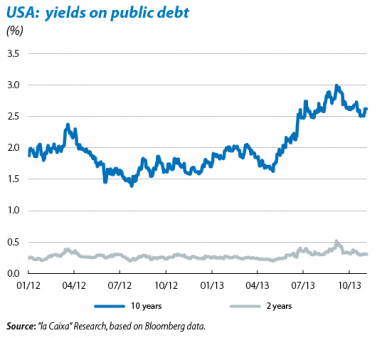 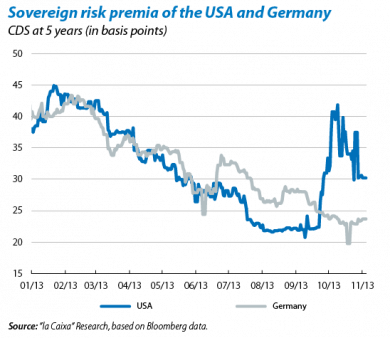 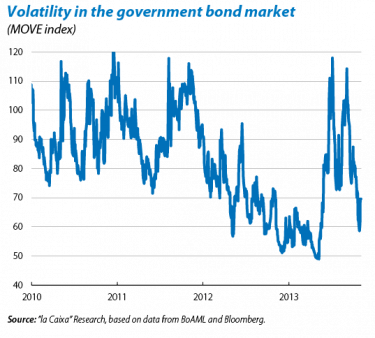 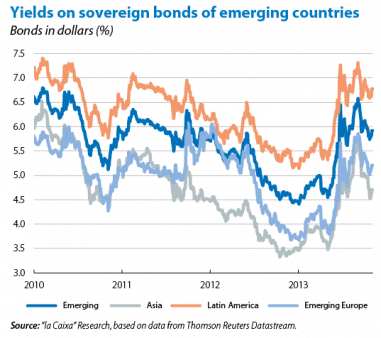 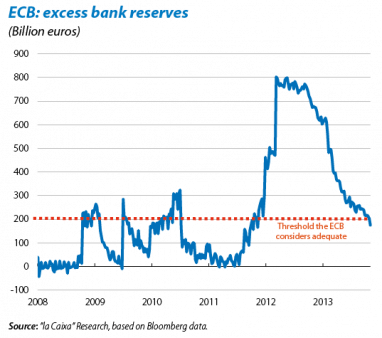 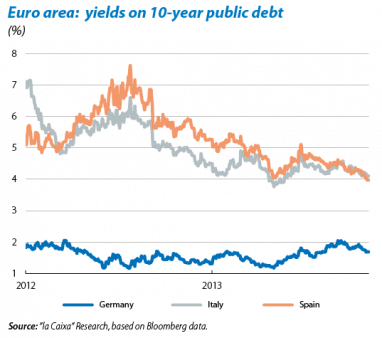 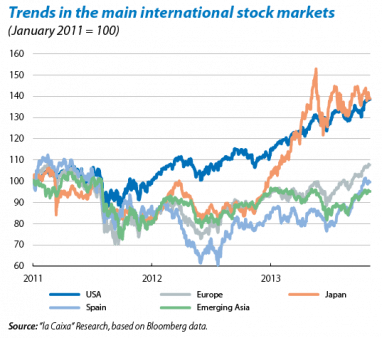 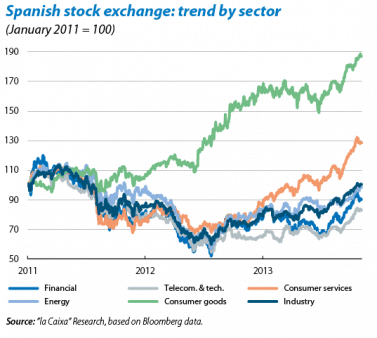 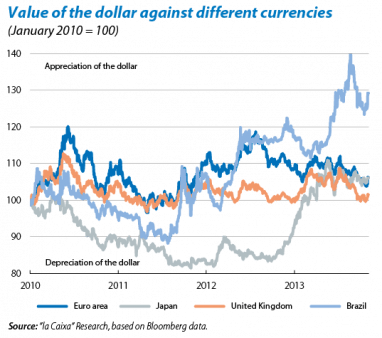