A fair wind for Treasury funding in 2015

The conditions of the Spanish public debt market have improved considerably over the last year and the likelihood of this situation continuing has led the Treasury to design an ambitious funding strategy for 2015. There are two goals: to reduce the average cost of outstanding debt at the same time as lengthening its average maturity to ease the payback schedule; an objective that, given the interrelationship between both variables, is no mean feat.

In this respect Spain has unsatisfactory figures compared with the rest of the euro area countries: the average cost of its debt is among the highest and its average maturity one of the shortest. Only Portugal and Italy have similar values although we must remember that the figures for Ireland and Greece would be much worse without the official financial aid received as part of their bail-out programmes. Nevertheless, Spain has a lot of catching up to do compared with countries with more stable finances.

Several factors are responsible for this simultaneous improvement. Firstly, less tension in market funding conditions, significantly reducing sovereign yields for countries in general. Secondly, improvement in the Spanish economy and its impact on the risk premium. And thirdly, how the Treasury has managed its debt. Of particular note in this last aspect is the enlargement of the investor base via innovations such as issuing inflation-linked bonds and issuing debt through syndicated operations. All this has raised the share of debt held by foreigners (from 43.7% to 49.4%). Similarly, replacing debt maturing in 2015 with new debt at 10 years has helped to increase the average maturity.

With a view to 2015, all the evidence suggests that this favourable financial environment will continue. The ECB's announcement of a sovereign debt purchase programme will result in the acquisition of just over 50 billion euros
of Spanish bonds in 2015 (almost 7% of the total outstanding debt between 2 and 30 years).1 All this should help to reduce the average cost of the debt managed by Spain's Treasury.

In other words, thanks to the current financial context the two goals set by the financing programme will benefit from a fair wind. However, it is necessary to continue such efficient management and thereby simultaneously increase the average maturity of public debt while also reducing its cost. The sails have been unfurled and there is a tail wind. But the Treasury still needs to keep a close eye on the rudder. 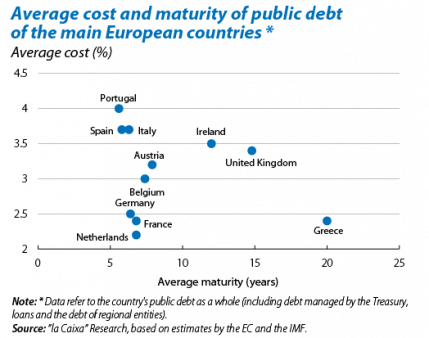 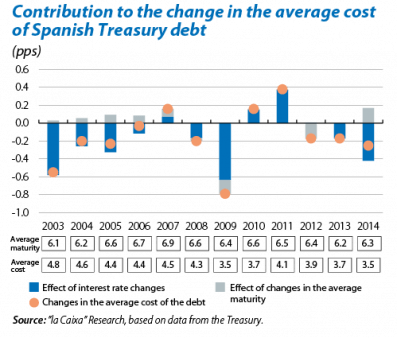