Favourable winds in the financial markets

Europe is leading the improvements in the global financial environment. After a volatile start to the year, the events
of the last few weeks have reduced some of the tail risks present in financial markets. The advances seen in Europe have been particularly significant, where the imminent start of quantitative easing (QE) by the European Central Bank (ECB) and activity gaining traction have been accompanied by an agreement concerning Greece's bail-out and some rapprochement in the Ukraine conflict. All this has helped to revive the upward trend in stock markets on the Old Continent. Outside the euro area, the tone of the markets is still dominated by the  accommodative strategy of monetary authorities, with 18 central banks cutting interest rates since the start of the year, an unprecedented figure. However, the ups and downs experienced by emerging assets and uncertainty regarding the decision to raise interest rates by the Federal Reserve (Fed) are still sources of risk. Nonetheless, we expect the large appetite for risk to continue, particularly in the case of European assets, and volatility to remain under control.

Debate regarding the first interest rate hike by the Federal Reserve is intensifying. In her semi-annual testimony
before Congress and the Senate, Fed Chairman, Janet Yellen, continued the prudential tone of the last few communications regarding the institution's interest rate normalisation strategy. Yellen ruled out the possibility of the first rise in the official rate in over eight years occurring before the Fed's meeting in June. In spite of this cautious approach, solid economic growth and a strong labour market have led investors to expect a hike in the non-too distant future and the monetary authority's intention to assess the decision «meeting by meeting», based on economic figures, will continue to intensify this debate. For the time being, we have maintained our forecast that interest rate normalisation will begin in November of 2015, although the market expects this to happen a little sooner.

Treasury yields pick up in February, especially in the long tranche of the curve. This upswing contains several different aspects: macroeconomic (the solidity of the US economy and improved inflation expectations); monetary (an imminent hike in interest rates by the Fed); and financial (less capital retreating to safe havens). At the same time, the uncertainty present on these three fronts has increased volatility in the US government bond market. Over the coming months, if these factors continue, this situation should push up yields on US sovereign debt even further, albeit very gradually and with possible interruptions, as investment flows enter in a search for yield given the effects of Europe's QE. However, the Fed's forward guidance must be concise and clear to prevent greater instability in the US government bond market.

The ECB starts its sovereign debt purchase programme with the Greek question still pending. The markets will
be watching the ECB Council meeting in March for answers to two very different questions: the first being the start of sovereign debt QE in March, with more details regarding how this will be carried out. It is expected that the resulting increase in the ECB's balance sheet of close to a trillion euros until at least September 2016 will push up the price of financial assets, although this rise may be limited in scope (see the article «QE comes to the euro area for a long visit» of the Dossier). The second question revolves around the next steps to be taken after the agreement reached with Greece. The ECB is likely to decide to increase the amount Greek banks can request under the ELA scheme while waiting for Greek debt to be accepted once again as collateral in LTROs. However, this last aspect needs the Greek government to comply with its commitments agreed with its creditors.

Tensions resulting from the negotiation for Greece's bail-out are limited to the Greek area. For most of February, the financial markets were keeping a close eye on negotiations between the new Greek government and the Eurogroup regarding the conditions of the country's bail-out programme. Finally, after long meetings, Alexis Tsipras's government reached an agreement that helps to ease the conditions imposed on its economy in exchange for presenting a list of structural reforms. However, this agreement needs to be ratified in April after the efforts made by the Greek government have been assessed, so we cannot rule out further tension for Greek sovereign debt. The upswing in yield was significant throughout the Greek sovereign curve last month and particularly in the short and medium tranche (the IRR on three-year debt exceeded 20% compared with 10% for 10-year bonds). With regard to the rest of the countries in the euro area, the impact on sovereign yields has been minimal, unlike in previous episodes. The IRR on the government bonds of some core countries fell, the German bund reaching an all-time low of less than 0.3%, while periphery yields also saw reductions. In both cases this performance was supported by the safety net provided by the start of the ECB's QE.

European stock markets see strong gains. After a doubtful and ill-defined performance in January, European equity
was clearly on the up in February. This is due firstly to the favourable outcome of the Greek problem and, secondly, to the imminent start of euro area sovereign debt purchases (QE) by the ECB, attracting significant flows of investors towards European stock markets in search of higher yields. Lastly, the euro area's positive growth figures came as some surprise, helping to reinforce the optimism of investors who now expect greater profits in the future. This scenario contrasts with the timid advances made by the stock market in the US. In spite of positive figures for US corporate earnings in 2014 Q4, investors are cautious given the slight growth in turnover of US companies. The relatively better performance of European stock markets compared with the US is likely to continue in the medium term, although subject to two conditions: the good rate of growth in the euro area continuing, as we expect, and the sources of geopolitical risk remaining under control. For their part the stock markets of the emerging countries have seen mixed results, attributable to the orderly slowdown in the Chinese economy.

The emerging central banks intensify their expansionary strategy. Over the last few weeks the accommodative spiral started by the ECB's QE and followed by other European central banks has spread to the emerging monetary authorities. There have essentially been three reasons for such actions: the loss of traction in some economies over the last few quarters; a reduction in inflationary pressures due to falling oil prices; and the appreciation of their currencies given the incredibly accommodative policies adopted in developed countries. In this respect, the central banks of Turkey and India have cut their official interest rates. Even more significant is confirmation of the expansionary approach adopted by China's monetary authority, reducing its official credit and deposit interest rates for the second time in less than four months, to 5.35% and 2.5% respectively.

On the currency front, the dollar takes a break. The interruption in the euro's depreciation against the dollar over the last few weeks, which had reached $1.12 by the end of February, is due to the Fed's repeatedly cautious approach. However, the start of the ECB's QE and the likelihood of the Fed toughening up its discourse will help the dollar to appreciate further against the euro.

Not a very encouraging outlook for commodities. After sharp falls early in 2015, the price of Brent oil has picked up again, now back at around 60 dollars/barrel. This upswing is due to lower levels of supply expected in the future because of crude oil exploitation and extraction projects being cancelled. In the short term, the trend in oil prices is likely to be erratic and ill-defined. The rest of commodities have not seen any great gains or losses, although the underlying weakness is widespread. One of the factors highlighting this situation is the weak tone of some  emerging economies, particularly China. In the medium term doubts will continue to plague the commodities markets given the orderly slowdown being implemented by the Chinese authorities. 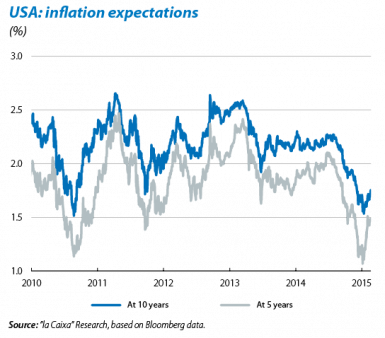 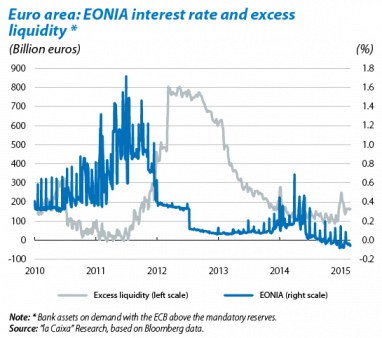 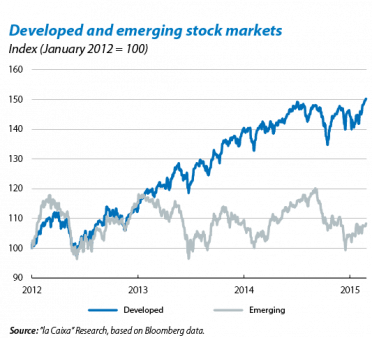 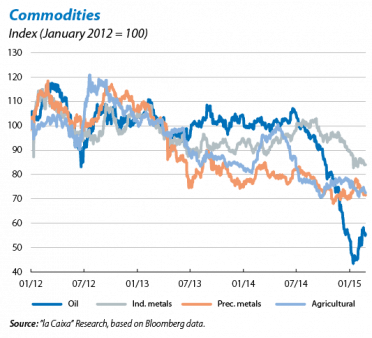