The financial situation of households in Spain

Little by little, data are now being published that help to analyse in detail the impact of the recession on household finances. This is the case of the 2011 Survey of Household Finances (Encuesta Financiera de las Familias or EFF in Spanish), an excellent source of information that helps to analyse the trend in the income, assets and liabilities of households according to different characteristics.

In 2010, the median household income was 25,400 euros, 8.5% lower than in 2007.(1) However, not all households were equally affected, with the largest drops occurring among medium and low-income households. Households with an income between the 20th and 60th percentile saw approximately a 10% reduction in their real income while those with an income above the 80th percentile saw a slight increase.

We can only analyse the initial impact of the crisis with the data published. To obtain a complete view, we will have to wait for the EFF of 2014, which will be published in three years' time. But if we take into account the fact that, by 2011, two thirds of the total jobs lost had already been destroyed, we have an idea of the probable extent of the recession's impact on the finances of Spanish homes.

(1) The median (50th percentile) is the value that, if we ordered all citizens from the least to the most in terms of the variable in question, would have the same number of individuals above and below it. In an analysis of trends in income, assets and liabilities, the median is a better estimate of the most typical distribution values than the average as, in general, these variables have very high values for a relatively small number of households. This anomalous feature of the distribution affects the average but not the median. 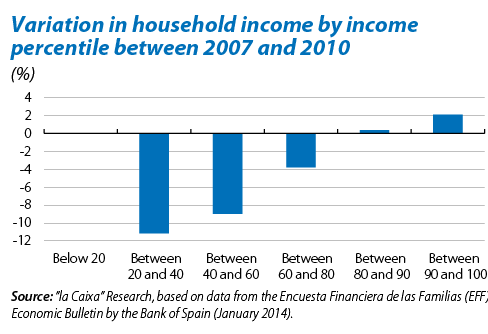 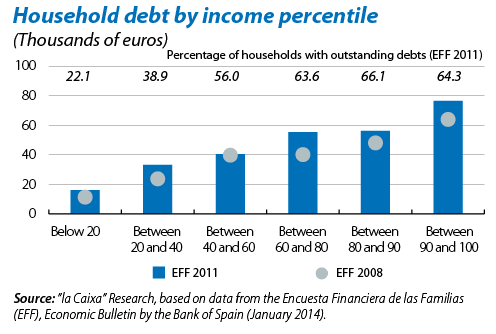 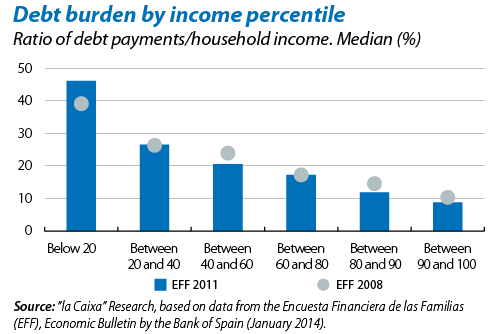