One of the most notable elements of 2013 has been the positive development of the euro area. The European Central Bank (ECB) acknowledged this itself in its recently published Financial Stability Review, which analyses the risk factors that could compromise the region's financial stability. Two important messages can be deduced from the assessment made by the ECB. One is optimistic: taken as a whole, systemic risks are developing positively and are now at levels prior to the outbreak of the financial crisis in 2007. The other is cautious: the scenario is still fragile and vulnerable, given the presence of four large risk factors, disparate in terms of their nature and scope.

The first great source of risk identified by the ECB is related to possible macroeconomic and financial shocks affecting asset valuations and the generation of profit in the banking sector. Modest growth prospects and the high rate of unemployment in the euro area directly jeopardise the quality of bank assets and this, in turn, restricts the supply of credit, further reinforcing the weakness. But 2014 will provide a good opportunity to reverse this situation: the banking solidity and stress tests (which will actually be carried out by the ECB) should serve to strengthen the position of the sector, both in terms of effective solvency (by means of appropriate recapitalisation) and also transparency.

The second risk factor is related to possible outbreaks of tension in the sovereign debt markets. This could occur should there be a delay in implementing the structural reforms required to correct fiscal imbalances and the loss of competitiveness in some countries. Although this has been one of the areas in which substantial improvement was made in 2013 (a generalised fall in periphery risk premia), a weariness with reforms or excessive complacency on the part of government authorities (both national and European) could bring about a recurrence of instability in this area. It is crucial to avoid such a mistake.

The road taken towards the progressive normalisation of monetary policy in the USA represents a third source of financial unrest. After Ben Bernanke's announcement in May concerning the intention to start tapering at the end of 2013, the markets became highly unstable, particularly visible in the emerging countries but also in the euro area. Although the measures adopted by the ECB have helped to mitigate the impact of the Fed's «manoeuvring» on EMU interest rates, the risks associated with a possible new phase of sharp rises in global interest rates cannot be ignored. Although, for the time being, the Fed's announcement that it would start tapering as from January 2014 has not caused any significant disruption, the ECB must be ready and willing to take further action should this be required.

The fourth risk perceived by the ECB is excessive and disorderly deleveraging on the part of banks, which could be exacerbated if banks from countries undergoing adjustments find it difficult to secure funding on the capital markets. Fortunately, the fragmentation between countries (core versus periphery) in terms of the availability and cost of credit for individuals and firms has shown some signs of improvement over the last few months. The progress made in creating a real Banking Union has been critical in this respect and will continue to be crucial in the future.

In short, the panorama of financial stability has improved, the risks are still significant but financial authorities and institutions have it within their power to neutralise them. 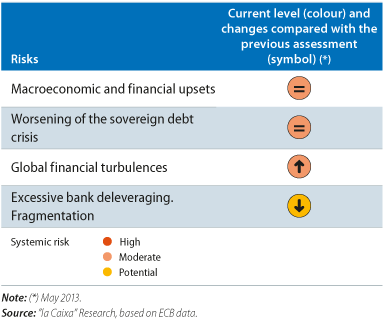