At the beginning of April, the International Monetary Fund published its half-yearly report on the risks threatening global financial stability (GFSR). Its assessment of the situation has not changed greatly since October 2013 but a slight positive shift can be seen. The main areas of improvement correspond to the advanced countries. The IMF has issued an optimistic message, in our opinion justifiably, acknowledging the substantial progress made by the euro area in redirecting the sovereign debt crisis, sorting out its banking sector and constructing the banking union. For the US it notes the (albeit incomplete) clarification of the fiscal situation, as well as the absence of serious tension after the Fed has effectively started its tapering. From now on, the main factor identified by the Fund is, precisely, the challenge posed for international markets by the gradual transition towards a new regime of global liquidity. In its role as guardian, it highlights two weak areas we will comment on here. One has already caused problems: the emerging markets. The other might be creating them: the US corporate bond markets. The key to avoiding further episodes of instability is for the improvement in economic growth (with its positive effect on incomes and solvency) to take over from liquidity as the mainstay of the markets.

The IMF believes that vulnerabilities in the emerging economies have become worse and lists those points requiring the most attention. The first of these concerns the boom in credit and growing levels of corporate debt. More leveraged firms may find it difficult to meet their debt payments, especially if interest rates start to rise. However, we believe the relative importance of this point is not so great as the average debt levels of the emerging block are still substantially lower than those seen in the advanced economies. The second weak point lies in the growing share of external and foreign currency debt out of the total. This makes the emerging countries more vulnerable to possible fluctuations in the global risk appetite, which would reactive capital outflows. However, there are macroprudential instruments to combat this weakness. The third vulnerability is related to the persistence of macroeconomic imbalances (current account deficit, public deficit and/or inflation) in some countries. Fortunately, a large proportion of these (for example India and Indonesia) are adopting measures aimed at correcting these imbalances. Most emerging countries are also firmly committed to reforms, leading investors to discriminate between this heterogeneous group of countries, so we believe that the risk of an episode of financial instability with systemic effects is limited.

The report also points out that the environment of overabundant liquidity generated by the Fed has overheated some parts of the capital markets in the US. There are several signs of this, both in terms of high share prices (low risk premia) and record volumes of debt securities being issued. Low rates for blue chip assets have pushed many investors to search for yield from high-risk instruments, such as high yield bonds, PIK bonds (payment-in-kind), covenant-lite loans and, once again, CLOs (collateralized loan obligations). The IMF does well to warn of this development. It is not alarming for the moment but the US monetary and macroprudential authorities should make sure it does not get any worse. In fact, it is encouraging to observe that they are already doing just that and have even taken measures in this respect. In our opinion, the consolidation of a path of sustained growth in the advanced block, with a key position for the US, accompanied by the continuing but gradual withdrawal of the Fed's extraordinary liquidity measures is actually a robust scenario that can withstand the risk of turbulence in this market. 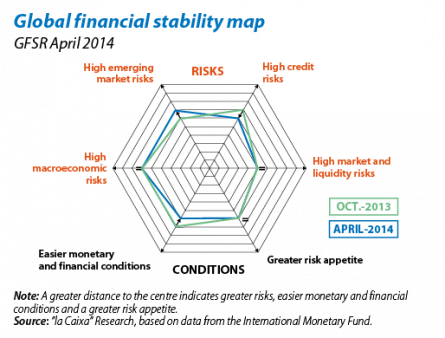 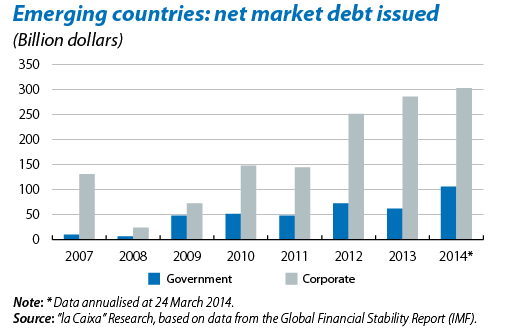