In the area of macroeconomic risks, the IMF believes the overall situation has not changed significantly since its previous report (April): it still expects activity to gradually improve at a global level but with a disparate geographical composition. On the one hand, the institution recognises that the recovery in the USA is gaining ground and that the situation in Europe is finally improving, albeit tentatively. However, it also indicates that growth prospects in several emerging countries are getting worse. This last point has led the IMF to state, perhaps with excessive caution, that the risks affecting markets from the global macroeconomic sphere are still downward. There is no doubt that the downgrading of growth forecasts for emerging countries is bad news as this effectively increases the downward risks for international growth. Unfortunately, such risk is being accentuated by expectations regarding the USA's monetary policy and the likelihood of capital leaving these countries, a situation that could deteriorate further if there is a sharp upswing in risk aversion on the part of investors. To cushion possible negative effects, the IMF recommends that local authorities should monitor the leveraging of agents (in particular in foreign currencies) and persevere with structural reforms as a factor to attract capital.

In principle, the fact that the USA's economic growth is consolidating is positive at a global level but uncertainty is also growing regarding how financial markets will react when the Federal Reserve (Fed) decides to start its monetary normalisation strategy. Regarding this risk, the GFSR quite rightly points out that the greatest challenge facing global financial stability at present is related to how any «collateral damage» is managed that may appear once the Fed starts to reduce its bond purchases. Undoubtedly the Fed will have to be appropriate and transparent in communicating its actions. As the IMF notes, it is important to bear in mind the fact that any worsening in liquidity conditions could cause serious, undesired effects. In particular, an initial sudden rise in interest rates could cause problems for leveraged positions in carry trade operations (which are financed in the short term but invest long term), which in turn could trigger mechanisms that amplify rate increases and tension, cutting short the recovery in activity and employment.

One area which the IMF duly praises is the advances that have been made in the euro area. Both structural reforms at a national level and the steps taken to improve the institutional architecture of monetary union are helping to reduce the financial pressures faced by governments in periphery countries. However, the GFSR believes that, on the whole, credit risks have hardly improved, claiming that bank balance sheets are taking too long to be put right. The IMF may be exaggerating this point somewhat to spur on governments to put their banks in order and implement European banking union.

In summary, the overall assessment of the IMF report is moderately positive. Although the challenges faced by authorities in the USA, euro area and emerging countries are highly complex due to the interconnection of risks, the reasonable coordination and cooperation observed at an international level and proper management carried out by central banks are paving the way for the transition toward a more stable global financial context to be completed successfully. 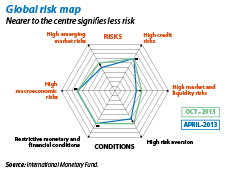