During the last year, the valuation of many financial assets reached a record high in 2013. Without doubt, the ultra-lax monetary policy maintained by the principal central banks in the world is a very important factor behind this positive trend in international stock market indices and global bonds. The behaviour by Europe's corporate bond markets, both investment grade and high yield, is no exception and their performance in 2013 has been buoyant.

The first positive feature that stands out in Europe's corporate bond market, including the countries of emerging Europe, is that the number of issuances has stabilised at a high level over the last four years. This has been possible thanks to the fact that growth in issuances of high yield bonds is compensating for the decline in the investment grade segment, in turn a result of banks not needing to issue so many bonds during their deleveraging process. Issuances are at an all-time high in the USA, following a similar pattern to the one seen in Europe; i.e. this dynamic situation is down to the high yield bonds being issued.

A second feature is related to the positive effects caused by the context of high global liquidity and official interest rates close to zero. Companies are enjoying a considerable portion of these benefits as they can reduce their financing costs at the same time as extending the maturities of the debt issued. Investors can also benefit from the current favourable situation for the markets. On the one hand, they are obtaining much higher returns than by investing in sovereign debt: over the last four years, the annual return has been between 5.0% for investment grade bonds and 9.0% for high yield debt. On the other hand are the benefits obtained from diversifying in terms of assets and sectors.

Taking all this information together, some questions are nevertheless bound to come up. In this market, are share prices in line with fundamentals? If so, how far could the corporate bond market go in the next few years? How will investors react when the central banks decide to reduce their stimuli?

In principle, for Europe's corporate bonds as a whole there is no evidence to suggest a marked decoupling between company share prices and fundamentals, even less so if we take into account the fact that, over the next few years, the scenario is one of growth, albeit at a contained pace. In the absence, precisely, of exuberant performances in the markets, the withdrawal of monetary stimuli by central banks should not represent any major source of instability insofar as this normalisation will be implemented gradually.

The expansion of Europe's bond market is not only reflected in the aggregate volume of issuances but also in the growing number of firms issuing bonds for the first time, as well as in the enlargement of the spectrum in terms of  sector, size, rating category and type of instrument. The range of investors is also widening, reaching private  small-scale savers. Although still a long way from the levels of the US corporate bond market, the European market has certainly started to catch up. 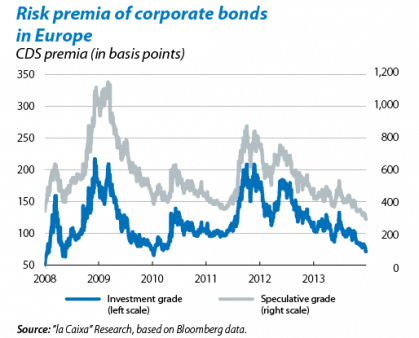 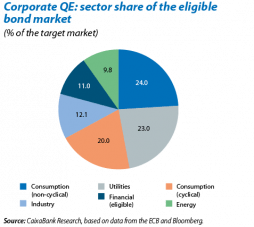