International markets get ready for the new global financial environment

International markets are still adjusting to recent political events. The trend in international markets over the last few weeks has continued to be dominated by the impact of Donald Trump’s victory. Whereas the prospect of more fiscal stimuli has particularly benefitted equity in the US, doubts regarding the new US administration’s policies continue to weigh heavy on emerging assets. In Europe, the «No» result of the Italian referendum has not hindered the restructuring of the banking sector as had been feared, supporting the strong gains made by banks in the principal European stock markets. Lastly, regarding monetary policy, the main central banks acted as per market expectations, with the Federal Reserve (Fed) raising its benchmark fed funds rate by 25 bps and the ECB extending QE until December 2017.

Towards a less accommodative global financial environment. One of the key changes which the market will have to adapt to is the adjustment in the US policy mix with a more expansionary fiscal policy and a somewhat more restrictive monetary policy. Although the main implications of this change can already be glimpsed, there are still several sources of uncertainty. In particular, the extent of the fiscal stimulus and the potential impact of other policies which may be implemented by the new administration, for example in the area of trade. On the monetary policy front, the sources of uncertainty have diminished and the fact that the Fed’s projections and market expectations have recently become more aligned, together with the continuing scenario of very gradual interest rate hikes, reduces the risk of any sudden adjustments. On the whole, this new environment should be more favourable for equity than bond markets and, in any case, appears to be more challenging for emerging assets. Nonetheless, the trends observed in key macroeconomic figures, which have been quite robust, lead us to believe that financial assets are tackling the increasingly accommodative global financial environment with relatively solid support.

The ECB announces an adjustment in its asset purchase programme to keep monetary policy accommodative. At its December meeting, the Governing Council (CG) of the euro area’s highest monetary authority decided to extend QE until December 2017 and, as from April 2017, to reduce the pace at which it purchases assets from the current rate of 80 billion per month to 60 billion. The ECB also introduced some technical adjustments to QE, consisting of including, within the asset purchase programme, securities with a maturity of between one and two years and, as necessary, securities with a yield to maturity below the interest rate on the ECB’s deposit facility. Draghi stressed the fact that tapering was not being implemented as the adjustments adopted did not consist of a gradual reduction in the volume of purchases. The ECB President also made it clear that the possibility of ending QE had not been considered, and that the volume of purchases may be increased or the programme extended, if required. Financial markets welcomed these announcements with gains in European stock markets, in particular in bank share prices, given the prospect of a steeper yield curve.

The Fed resumes the process of normalising its benchmark federal funds rate. One year after the first interest rate hike in eight years, as expected the Fed announced an increase of 25 bps in the benchmark rate to 0.50%-0.75%. The members of the Federal Open Market Committee (FOMC) supported this decision given the strength shown by the different indicators for activity and the labour market in the US, believing these trends will continue in the future. However, most attention regarding this meeting was focused on any clues that might be provided by the Fed concerning the rate of interest rate hikes in the coming quarters. Specifically, the FOMC members now expect three hikes in 2017 while the projections published in September only considered two. Therefore, in spite of this slight change, the Fed is still expected to normalise monetary conditions very gradually. One of the factors that may alter this forecast is the Fed’s assessment of the impact on growth and inflation of the new economic policy to be implemented by Trump’s administration. A unknown factor which the Fed will reveal once the announcements made by Trump become concrete measures.

The US bond market is still going through a corrective phase. After the strong upswing caused by Trump’s victory, yields on US government bonds, especially long-term, have continued to rise, albeit more gradually. Far from slowing down this trend, the Fed’s messages have acted as a catalyst to push up yields even further. In the second half of December, the interest rate on 10-year US Treasury bonds was around 2.5%, its highest since mid-2014. The prospect of a change in economic policy, with more emphasis on fiscal stimuli, is still the main reason for this spike in US sovereign bond yields. But in the last few weeks other factors, such as strong business indicators and the upswing in oil prices, have also helped to push up yields.

The dollar appreciates strongly against the euro while emerging currencies are showing signs of stabilising. The euro-dollar exchange rate is approaching parity, reaching its lowest level since 2003, mainly because of expectations of prolonged divergence between monetary policy in the US and the euro area. However, emerging currencies have shown signs of stabilising against the dollar after the strong correction caused by Trump’s victory. The upswing in oil prices and the reduction in risk aversion to minimal levels are the main factors behind this stabilisation. However, higher interest rates in the US could put the pressure back on the emerging currencies in the coming quarters.

Emerging stock markets continue to digest Trump’s victory while the banking sector boosts European stock markets. Unlike most of the developed stock markets, Trump’s victory continues to penalise a large proportion of the emerging equity markets. In spite of stabilising to some extent, emerging stock markets have remained close to the minimum levels reached after the electoral result was announced. Doubts regarding the policies that may be implemented by the new US administration, in particular regarding trade, are the main factor behind this stagnation in emerging securities. Clarification of this source of uncertainty, together with tougher global financial conditions, will determine how emerging assets perform over the next few months. In the advanced bloc, the three main US stock market indices (S&P 500, Nasdaq and Dow Jones) have reached all-time highs. In Europe stock markets have picked up strongly due to the boost provided by the banking sector resulting from the adjustments introduced by the ECB to its QE programme and especially thanks to the dissipation of fears of a stalemate in resolving the ailing Italian banking sector.

The OPEC agreement pushes oil prices to their highest level since the summer of 2015, hovering around 55 dollars per barrel of Brent quality. This strong upswing in the price of crude oil occurred in two stages. Firstly, on the announcement that production would be cut by 1.2 million barrels a day by the cartel’s member states, on 30 November. Secondly, on 10 December with the confirmation that the other 12 oil-producing countries which are not members of OPEC (including Russia) have joined the agreement, cutting their production by 600,000 barrels a day. Beyond these ambitious targets to limit production, Saudi Arabia’s leadership and the implementation, for the first time, of a control mechanism to ensure the agreement is fulfilled make this development more credible and the impact on oil prices could therefore continue for some time. Nonetheless, in the long term the upward trend in oil prices appears to be relatively limited as this could make it easier for other producers to enter the market, in particular shale oil producers (for more details, see the Focus «The oil producer agreement: the cartel is back» in this Monthly Report). 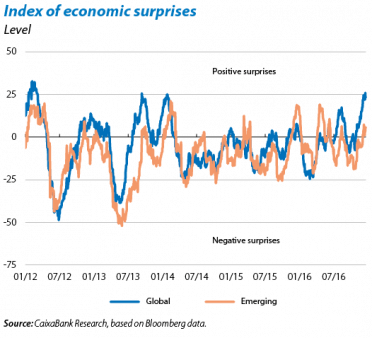 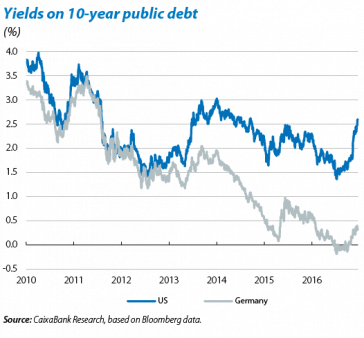 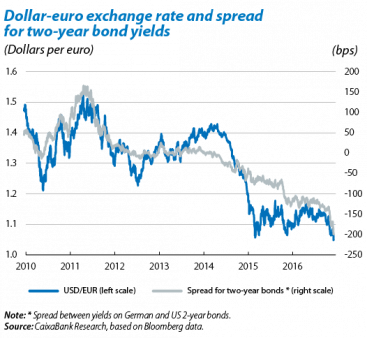 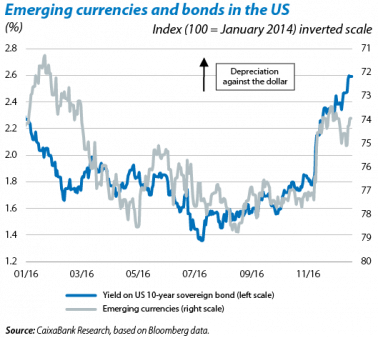 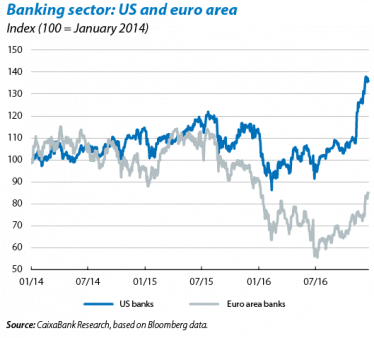 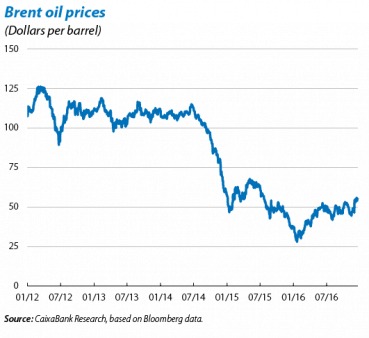