Light at the end of the tunnel?

Sentiment improves on international stock markets after the prolonged sell-off at the beginning of the year. Market sentiment deteriorated again early in February with further drops in the price of oil and continued capital outflows from China. As the month progressed investors' attention was grabbed by some signs of economic slowdown in the US and the possible effects of even more accommodative monetary policy on the euro area's banks. However, the markets managed to begin a change in trend after OPEC's agreement to freeze crude oil production and the announcement of several measures by the Chinese monetary authorities. The latest macroeconomic indicators and central banks' minutes also helped to limit excessive stock market losses although markets will continue to be relatively volatile until doubts are resolved on four fronts: China's growth prospects, oil prices, the US economy and Europe's financial sector.

China's slowdown makes less of an impact on the markets. The uncertainty caused by the Asian giant's shift towards an economy where services play a larger role, together with devaluations in the yuan, meant that capital outflows continued in February. However, statements by the governor of the People's Bank of China (PBoC) arguing that pressures on the renminbi were not due to fundamental reasons and that capital outflows would be temporary helped to calm investors. The PBoC also announced further injections of liquidity to stimulate the economy and a reduction in restrictions on foreign investment in domestic bond and equity markets to counteract pressure on the Chinese currency.

Oil picks up from its minimum level and joins other commodities, supporting an upswing in stock markets. The period of persistently low oil prices has had a costly effect on the economies and fiscal balances of producing and exporting countries. Shortly before announcing an OPEC meeting, Saudi Arabia stated that its national accounts were suffering considerably. The agreement to freeze crude oil production led to a 13% upswing in the price of a Brent barrel in the second half of the month. Although recent declarations by the Iranian Minister for Energy have tended to revive pessimism among investors, the possibility of an agreement and adjustment in supply as a consequence of the slowdown in investment in the sector have laid the foundations for more sustained rises in the future. Other important commodities such as copper, iron ore and zinc also contributed to the constructive tone of the stock markets in the second half of the month.

The perceived risk of a slowdown in the US has increased, with the economy losing steam as corporate earnings are falling. The last earnings season was disturbing for some after earnings per share (EPS) fell by 7%. Once again the energy sector was the main culprit of this trend which has consolidated after several quarters of similar results. But there was no growth in EPS in the other sectors either and sales fell by 4%. In any case the major analysts have revised downwards their earnings forecasts for 2016. This trend is in addition to several indicators which have also harmed investor sentiment: industrial production has declined in 10 of the last 12 months, corporate risk premia are rising, the conditions for wholesale loans are slightly stricter and the interest rate curve is the flattest it has been since 2007 but with rates close to zero. On the whole the probability of a recession has increased although the likelihood is still low and the foundations of the US economy (particularly the labour market and housing) seem to be withstanding external shocks quite successfully.

European banks are being overly punished. The Eurostoxx Banks and Stoxx 600 Banks indices have lost 22% in the year to date, twice the amount of the Eurostoxx 50 and Stoxx 600 indices. The earnings of two thirds of the banks in the euro area were surprisingly low, once again bringing the sector's returns to the attention of investors within a context of rock-bottom interest rates and unusually flat curves. In February attention was also focused on CoCos (contingent convertibles) due to the risk of banks not being able to make coupon payments on these bonds in the case of limited solvency or losses caused by a scenario in which capital would be converted. Such doubts contrast with the euro area's macroeconomic indicators which are reasonably solid. In fact, corporate earnings posted growth of 3% in terms of EPS and 4% in income (both excluding the energy sector).

The Federal Reserve (Fed) retreats again given the uncertain global environment. The minutes of the Fed's January meeting, in line with recent comments by council members, underlined the continued improvement in the labour market and the generally positive tone of the economy as a whole. A vigilant tone was adopted, however, on mentioning the downside risks resulting from somewhat more restrictive financial indicators (due to larger spreads for corporate bonds and higher interest rates on wholesale loans) and weaker global growth prospects. For the time being the Fed does not believe these risks are serious enough to modify its growth forecast for the United States in the medium term. However, for the market they are reason enough to expect, at most, one hike in the federal funds rate this year.

The ECB fuels expectations of further measures in March. The same global risks that threaten monetary normalisation in the US (uncertainty regarding world growth, downward pressure on inflation due to the trend in oil prices and the fragile financial environment) have also led the ECB to suggest it might increase its accommodative stance in March. The Governing Council of the ECB wished to convey the fact that it is prepared to continue using all its resources but the markets remain sceptical regarding the effectiveness of monetary policy. Investors are weighing up the risk that central banks no longer have much leeway if adverse shocks materialise and that the supply of eligible assets to implement measures is running out (see the Focus «Can the ECB easily extend its public sector purchase programme?» in this Monthly Report). The market currently expects an additional cut of 10 bps in the deposit facility in March, as well as an enlargement of the asset purchase programme.

Emerging stock markets withstand the onslaught while a search for safe assets predominates. The MSCI Emerging Markets index has lost 6% since the beginning of year with a similar performance for the S&P 500. The dollar's depreciation against a set of emerging currencies has helped them to weather the storm but there is still risk due to growing corporate debt, accentuated by the recent tightening up of credit conditions and the increase in loan defaults. Given this situation of uncertainty and volatility, gold has once again become a safe haven, gaining more than 16% in 2016. US and German government bonds have also become more popular, their 10-year yield falling in February by another 20 bps and 23 bps to 1.74% and 0.12%, respectively. US and European equity have seen some outflows, especially by retail investors but a lot of strategic investment funds have positioned themselves for an upswing by increasing their exposure to equity.

The downside risks for the markets are still moderate. Although the oil-China tandem will continue to be the main driving force for the markets in the short term, a close eye will still be kept on the possibility of a slowdown in the US, as well as the effectiveness of monetary policy and the UK referendum on its possible exit from the European Union (Brexit). The sectors associated with crude oil have continued to damage the stock markets and credit risk in the energy sector has increased notably due to the onset of the first bankruptcies of small firms in the US. However, at present this risk is unlikely to become systemic. Goldman Sachs estimates the exposure of banks to loans related to the energy sector at 2.5% of their assets while exposure to mortgages in 2007 was 33% (see the article «Financial stability and cheap oil: a blessing or a curse?» in this Monthly Report). In the area of currencies, the current Brexit debate depreciated the pound sterling by around 6% against the dollar and euro. 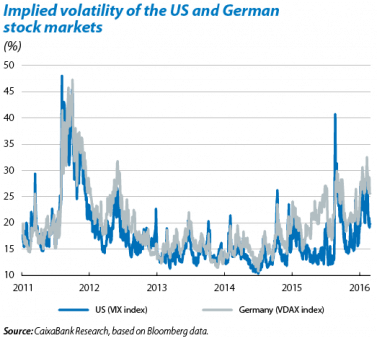 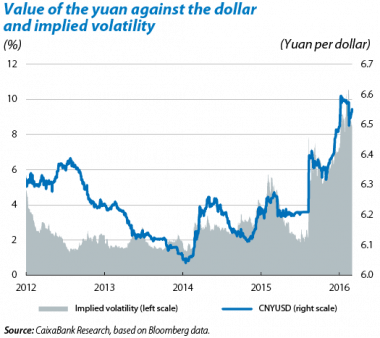 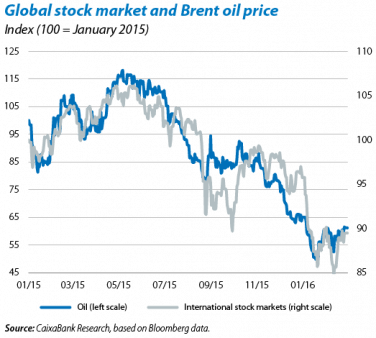 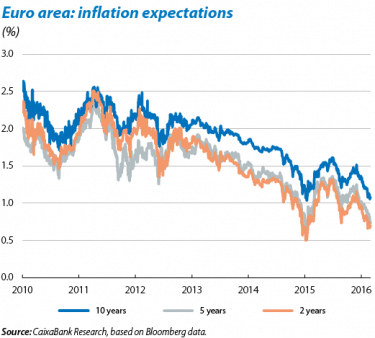 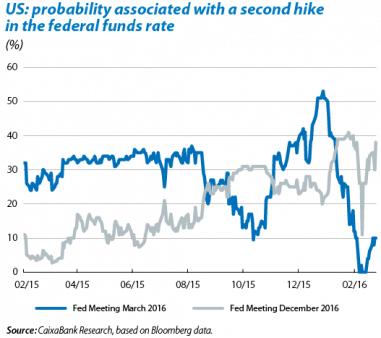 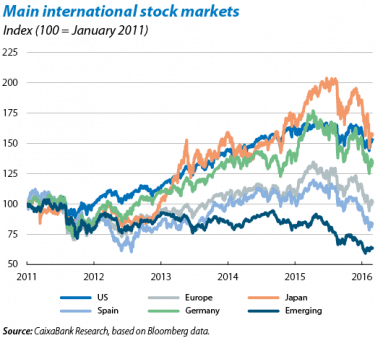 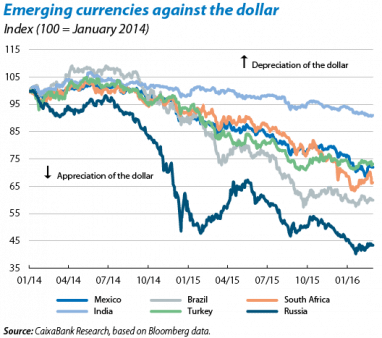