Finantial markets grow confident. Global financial markets remained positive in October within a positive world macroeconomic scenario characterised by good growth prospects and a very gradual recovery in inflation. The US stock market continued to post record gains while both the dollar and Treasury bond interest rates made up some of the ground lost over the past few months. This growth is occurring while the Fed has kept its interest rate hike scenario unchanged (one more in 2017 and three in 2018) and the Trump administration has presented its tax reforms to the US Congress. Emerging markets financial conditions also appear to be withstanding the Fed’s normalisation with continued gains in emerging stock markets, supported by confidence in their macroeconomic fundamentals. Finally, European stock markets also saw gains and interest rates remained stable with the ECB prolonging its asset purchase programme (APP) into 2018, as the market expected.

The IMF sees a window of opportunity to reinforce financial stability. In its October Global Financial Stability Report, the IMF examines the increasing risk appetite fuelled by a combination of benign global macroeconomic conditions and unusually accommodative financial conditions. Although it believes this greater risk appetite is a desirable consequence at a point in the cycle where some resources are still underutilised, the IMF also notes  that this could increase financial instability should such an environment continue for too long. The Fund warns of the following sources of risk in particular: the rebalancing of investment portfolios in response to diverging monetary policies by the main central banks, high financial asset valuations and pressurised risk premia, high indebtedness overall and the transition of China’s economy. The IMF suggests that advantage should be taken of this benign environment to strengthen the international financial system, completing the agenda of regulatory and macroprudential policy reforms.

Stock market gains in the developed economies. Supported by the publication of good economic activity indicators, a positive start to the corporate earnings campaign for Q3 2017 and accommodative financial conditions, stock markets ended the month with widespread gains (S&P 500 +2.2%, Eurostoxx50 +2.2%, DAX +3.1% and CAC +3.3%). This was particularly the case in the Japanese stock market. Equity soared after Shinzo Abe’s victory in the early elections, reaching levels not seen since the mid-90s (Nikkei +8.1%). The Spanish stock market saw more moderate gains, however, with the Ibex 35 up by 1.4%.

The Fed remains on course for another interest rate hike. The meeting of the Federal Open Market Committee (FOMC) provided few surprises, leaving interest rates unchanged (fed funds target rate range at 1.00-1.25%) sending emergences of continuity to the existing programme. The Fed noted the positive growth in economic activity and the labour market. However, it repeated that inflation is still below the 2% target and underlined the importance of monitoring developments closely. As a whole, FOMC members repeated their view that, with gradual interest rate hikes, economic activity and the labour market will be dynamic enough to achieve the inflation target in the medium term. Investors believe the likelihood of another fed funds rate hike at the next meeting in December is higher than 90%. The financial markets did not react greatly to these messages of continuation and attention was focused on Jerome Powell being chosen as Janet Yellen’s successor as Fed Chairman. Powell is currently on the Fed’s Board of Governors and supports the very gradual normalisation of financial conditions. After being proposed by Trump, his appointment is expected bound to be approved by the Senate.

The ECB reduces its stimulus for 2018. At its October meeting, the Governing Council (GC) announced its asset purchase programme (APP) will continue at the current monthly pace of EUR 60 billion until the end of December 2017. Then from January to September 2018 the monthly pace will fall to EUR 30 billion. This decision by the ECB seeks to balance the more solid growth in economic activity and the fact that inflation’s recovery is, and will continue to be, very gradual. This lower rate of purchases reflects the improved macroeconomic scenario while the programme’s extension up to (at least) September 2018 reinforces the ECB’s intention to keep financial conditions accommodative. Moreover, the GC repeated its commitment not to raise interest rates for an extended period of time. It also stated that principal payments from maturing securities purchased under the APP will be reinvested. The ECB therefore took its first step towards normalising monetary policy but without destabilising the markets. In fact, throughout the month sovereign interest rates remained relatively stable, even decreasing the week after the ECB’s meeting, with risk premia falling. This was particularly noticeable in Italy, after S&P upgraded its sovereign rating from BBB- to BBB.

The dollar recovers some of the ground lost. In October the dollar continued the previous month’s trend and appreciated against the main currencies. This was largely due to the Fed’s commitment to its interest rate plan (four hikes by the end of 2018 according to its own projections), the ECB extending its APP and greater investor optimism due to the Trump administration’s tax reforms. Compared with the main advanced economies, the dollar appreciated by 1.5% against the euro, by 0.8% against the pound and by 1.0% against the yen. Among the main emerging currencies, the biggest depreciations against the dollar were posted by the Turkish lira (–6.0%), the Mexican peso (–4.7%), the South African rand (–4.0%) and the Brazilian real (–3.4%).

Emerging stock markets are positive, on the whole. The MSCI emerging stock market index reversed its correction at the end of September and increased by 3.5% in October. By region, Asian equity performed particularly well (MSCI Emerging Markets Asia Index +5.3%) with strong growth in the Indian stock market (Sensex +6.2%) and more moderate gains in China (+1.3%). In Latin America, however, the poor performance by stock markets in Mexico (Inmex –3.0%) and Colombia (Colcap –4.2%) affected the MSCI Index for the region. This ended the month down by 3.7% in spite of the stability of Brazil’s equity (Bovespa +0.0%) and the gains made by Argentina (Merval +7.1%).

Oil rises above USD 60 per barrel. For the first time since July 2015, the price of a Brent barrel of oil went above USD 60. This increase was supported by lower crude oil stocks in the US, which have fallen again after a temporary upswing in September (due to the impact of the hurricanes). It was also boosted by the statements made at the end of the month by OPEC’s Secretary General, announcing that Saudi Arabia is in favour of  extending the agreement to cut oil production. This agreement, key to the oil price recovering from its slump in mid-2015, was meant to end in March 2018. Now, however, OPEC is likely to discuss its possible prolongation at its ordinary meeting set for the end of November. 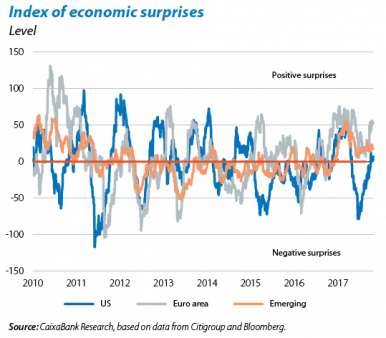 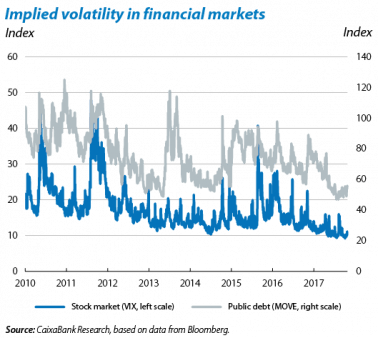 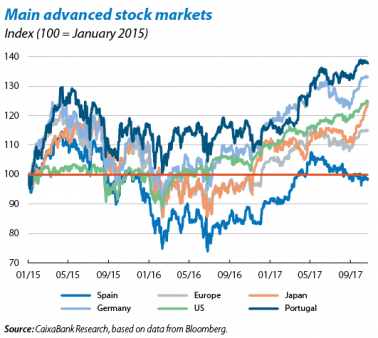 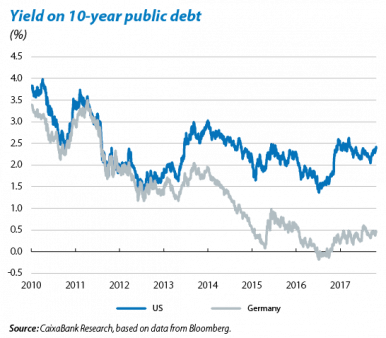 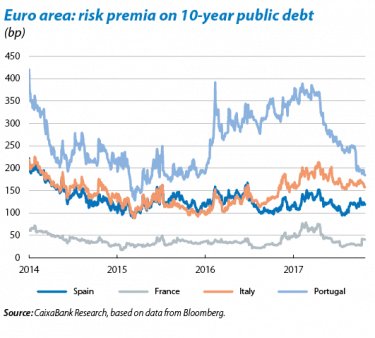 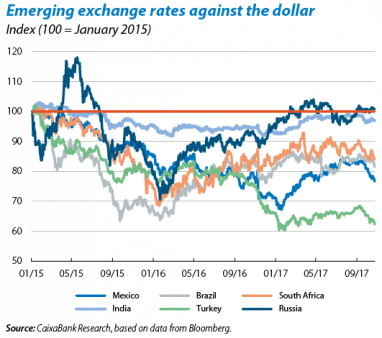 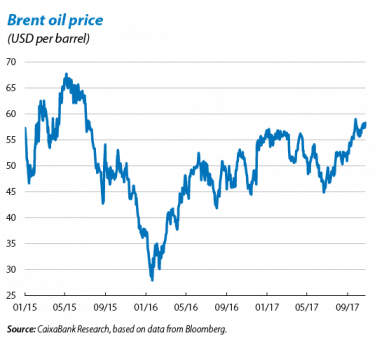