The markets confirm their recovery

The constructive climate in the international markets continued in April. Signs of stabilisation, which had already appeared in March, consolidated and resulted in a greater willingness to take risk on the part of investors. Both equity and bond markets have benefitted from this overall favourable environment although risk asset prices in the advanced bloc have looked more hesitant. In general the volatility of financial assets has stabilised at levels similar to those observed before the summer, leaving behind the sharp upswings in nervousness occurring over the last few months. This consolidation of a more stable international financial environment is due to three key factors. Firstly the reduction in global macroeconomic uncertainty thanks to activity data from the US, Europe and China that, although not buoyant, have not come as a shock to the markets. Also the recovery in oil prices which has built up steam over the last few weeks, pushing a barrel of Brent oil comfortably above the 40 dollar mark. Lastly the accommodative messages given out by the Federal Reserve (Fed) continue to act as an important pillar of support that has sustained the recovery in risk assets.

Nevertheless, in spite of the positive tone of the last few weeks, caution is still required given the fragile nature of investor sentiment. Concerns regarding China's growth and the United Kingdom possibly leaving the EU are hovering like the sword of Damocles over international markets. The consolidation of the upward trend in the oil market will be essential to reinforce the constructive tone of the markets and ensure this continues, particularly in the emerging area. The correlation of crude price with returns on the main financial assets over the last few months illustrates the importance of the trend in oil for the performance of risk assets in the short term.

In the monetary sphere, the Bank of Japan has taken over centre stage from the Fed. Unsurprisingly, the Federal Open Market Committee of the Fed decided to keep the official rate between 0.25% and 0.50% at its meeting on 27 April. The US monetary authority maintained a cautious tone in its communication, in particular regarding the apparent slowdown in the US economy in spite of the sustained improvement observed in the labour market. It should however be noted that, unlike in its previous communications, this time the Fed did not stress the risks resulting from the international economic and financial environment. In any case Fed members stated that they will be closely monitoring the trend in inflation and the global environment. Such caution continues to weaken the dollar which has fluctuated against the euro within the range of 1.13 to 1.14. With regard to future hikes in the benchmark interest rate, the official projection of two hikes a year still remains in place but the market only expects one, in December. The surprise in the area of monetary policy this month was provided by the Bank of Japan, which decided not to introduce any changes in its monetary policy, against the expectations of the markets. The central bank justified its decision, which resulted in losses on the Japanese stock market and strong appreciation in the country's currency against the dollar, with the need for more time to evaluate the impact of the stimuli recently introduced, in particular the negative interest rates that came into force at the beginning of year.

Meanwhile the ECB has followed its route map established in March and disclosed details of its Corporate Sector Purchase Programme (CSPP) to purchase corporate bonds. After announcing a battery of measures in March, and in line with expectations, at its April meeting the ECB's Governing Council decided to keep official interest rates unchanged. The monetary authority repeated its message of caution and underlined its readiness to make its policy even more accommodative, if necessary. Draghi confirmed that the ECB had already begun to increase the rate of QE purchases up to 80 billion euros a month, as had been announced in March, and looked confident that inflation in the euro area would pick up in the second half of the year. The news at this last meeting was provided by the disclosure of details regarding the CSPP which will begin in June. In March the ECB had already announced that purchases would include investment grade bonds denominated in euros from non-banking firms established in the euro area. This time the European institution specified that CSPP-eligible bonds would have maturities between six months and 30 years and that it would make purchases both in the primary and secondary market up to a limit of 70% of each issuance. Nevertheless the ECB still has to confirm the rate of monthly purchases, which could be between 8 and 10 billion according to the consensus of analysts.

Europe's private bond market continues to anticipate the ECB purchases. The sharp drops in yields on European corporate bonds, which started to be seen after the announcement of the inclusion of corporate bonds in QE, continued in April, benefitting both investment grade debt and also the high yield segment. With regard to sovereign bonds the yield on the German bund saw a slight upswing throughout this month, reaching almost 0.3% before falling slightly after the markets noted the Fed's cautious tone. The combination of two factors seems to have supported this upward trend. On the one hand, higher inflation expectations due to the upswing in oil over the last few months are gradually being reflected in bond prices. On the other hand, the fact that this upswing is in line with those observed in other risk-free interest rates (such as those of the United States and United Kingdom) suggests that it is also due to a decline in «flight to quality». Lastly, periphery sovereign debt is still subject to several sources of instability, especially in Portugal and Greece, albeit of a limited scope and duration. However, Spain's risk premium ended the month on a positive note, falling below 135 bps in spite of confirmation that another general election will be held on 26 June.

The corporate earnings campaign for 2016 Q1 in the US has gone according to expectations. With 58% of the S&P 500 enterprises having reported their earnings for 2016 Q1 by the end of April, profits recorded a decline of 5.3%, a slightly better figure than initially expected. The dollar's appreciation and the slump in the price of crude oil over the last few quarters continue to affect the bottom line of US firms. However, the influence of both factors on corporate earnings will tend to recede over the coming quarters and, in any case, such drops cannot be interpreted as a precursor to recession in the US (see the Focus «Is the drop in earnings in the US heralding another economic recession?»). Nonetheless, in April the S&P 500 was one of the few indices among developed stock markets that managed to improve on their level at the beginning of the year.

Emerging stock markets move away from the rest while international stock markets consolidate their upward trend starting in mid-February. The MSCI for the global stock market has consequently exceeded its level at the beginning of the year although the stock markets of the advanced countries adopted a more doubtful tone. On the Old Continent in particular, doubts regarding the banking sector resulted in a complicated start to the month. Nevertheless the upswing in this sector during the second half of April has once again placed European stock market indices on the right path, with particularly large gains in the case of Spain and Italy. However, throughout this month the equity markets of the emerging bloc recorded the sharpest rises. The solid advance in commodity prices, and especially oil, has been a powerful factor behind this situation.

The upward trend in oil prices is gaining traction and pushing crude towards its highest level since the end of 2015. After taking a break throughout most of March, the price of oil recovered its upward trend which had started from its minimum level in January. The lack of success at the Doha meeting on 17 April, during which OPEC members and other important crude oil producers failed to reach an agreement to freeze production, only temporarily halted this upward trend in prices which ended the month above 48 dollars per barrel in the case of Brent. Regarding the future, the factors determining supply will continue to be key to any price fluctuations in the market for black gold. In addition to a hypothetical limit on production by OPEC members, the sharp drop in production of US shale oil will continue to push up prices in the short term although we obviously cannot rule out any episodes of volatility for this trend. 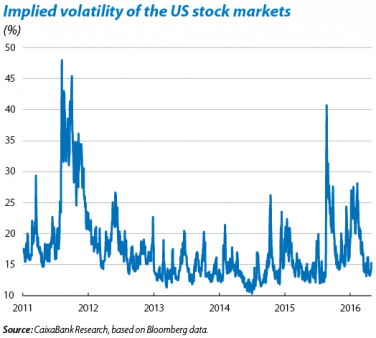 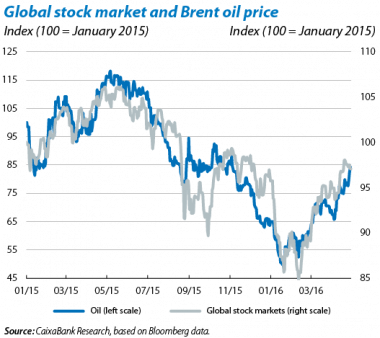