Stability is the order of the day in markets that are keeping a close eye on the central banks. After notable gains in previous months, risk assets are now generally consolidating or pausing, differing in profile depending on the country and asset type. The «business as usual» approach taken by the monetary authorities in developed countries, keen on keeping policies ultra-easy, together with the moderate but resistant pulse of the US economy and the favourable trend in activity for the euro area, are the elements supporting this constructive climate.

The actions of the Federal Reserve (Fed) will continue to influence market behaviour to a large extent. The recent pattern of behaviour continues: great sensitivity to any strategy and tempo announced by the Fed. Specifically, the announcements made by Janet Yellen, the institution's next Chairman as from February, stating her intent to continue with expansionary policies in order to support the recovery and reduce unemployment, were well received by investors. Although the consensus of analysts expects tapering to begin early next year, it cannot be entirely ruled out for December should November's activity and employment figures show solid advances. However, we must remember that, as several leading members of the Fed have already stated, the monetary normalisation strategy will be very gradual and conservative and official interest rates will remain at levels close to zero for a long time. Given this situation, yields on 10-year public debt recorded contained movements.

For its part, and contrary to expectations, the ECB cut interest rates. It reduced the refi and marginal credit facility rates by 25 bps to an all-time low of 0.25% and 0.75%, respectively, while keeping the deposit facility rate at 0%. The ECB's decision, dealt with in more depth in the Focus «The ECB cuts interest rates: the right move or too early?», is due to downward pressure on inflation in the euro area (more acute in countries undergoing adjustment and internal devaluation, such as Spain). The institution extended by another year, up to mid-2015, the unlimited liquidity auctions at the usual maturities, so that risks related to liquidity and rising monetary rates are reasonably under control.

Institutional support of the euro area has become even more important, if possible, given the little room to manoeuvre available and the problems of the effectiveness of standard monetary policy. The design and implementation of the Single Resolution Mechanism, as part of the future banking union, is the main front where progress must be made: too long a delay could be very costly in terms of the credibility of European community institutions and would make it more difficult to continue reducing the fragmentation in the euro area's capital market. The pact reached in Germany between Christian Democrats, led by Chancellor Angela Merkel, and the Social Democrats to govern in coalition is likely to soften Germany's stance towards the scope of banking union. At the same time, the solidity assessment exercise to be carried out by the ECB over the coming months on the euro area's financial institutions could be a source of instability regarding the banking system. In spite of all this, we believe that any difficulties that may arise will be overcome.

Meanwhile, volatility in the emerging markets remains at moderate levels, waiting on the Fed's next move. The prospect of an early start for tapering given the USA's employment figures in October rekindled capital outflows from the emerging block, albeit contained and far from the levels recorded during the summer sell-off. Episodes of instability such as the current one will crop up, although the better growth prospects for the large emerging countries will help to stabilise the financial environment. Similarly, the persistence of a moderately restrictive bias for monetary policy in some countries such as Brazil, India and Indonesia, aimed at controlling inflationary tensions and gaining credibility in international markets, will be another factor that will favour greater stability given the future scenario of global interest rates on the rise.

The Chinese authorities outline an ambitious structural reform plan. In the financial area, the main lines of action will focus on facilitating a more open stance to foreign investment, progressing with the liberalisation of interest rates, the exchange rate and the convertibility of the capital account, as well as on promoting prudential regulation of the financial system as a whole. Although an evaluation of the reforms is positive, given that they are moving in the right direction, any correction in the internal imbalances suffered by the Asian giant (excessive credit and real estate prices) will be slow and these will therefore continue to be a risk factor.

Far from slowing down, the exuberance in credit markets is intensifying. The environment of abundant liquidity and exceptionally low interest rates has led to a large proportion of the positions dissolved by investors in emerging assets being passed on to corporate bonds with high yields and low credit quality, particularly from US companies (see the Focus «Overheating in the US credit markets»). In many cases both the volumes being issued and credit spreads are at the same level as before the financial crisis, highlighting the potential risks involved in the current situation. The Fed remains vigilant in this respect, so that mere verbal intervention may be enough to provoke corrections in these markets.

Mixed tone for the stock markets in November: gains in the USA, euro area and Japan; a pause in Spain and emerging countries. Once again the US indices S&P 500 and Dow Jones and the German Dax have reached historic highs. The developed block maintaining ultra-easy monetary policies, together with favourable developments in the world's macroeconomic situation, lie behind this situation. The publication of corporate earnings for Q3 in the USA and Europe has strengthened the upward trend in the stock markets in spite of the fact that the results from the Old Continent have been slight: 46% of the companies on the Eurostoxx 600 have beaten the forecasts while in the USA this percentage reaches 67% among firms on the S&P 500. Although the medium and long-term outlook for global equity is positive, in the short term this upward drive could give way to a correction that is moderate in both scope and duration, especially in America's case. This can already be seen in the Spanish stock market, which is going through an orderly correction that will relieve the situation of excessive overbuying seen recently. For their part, the emerging stock markets are losing steam, consolidating their tepid gains of previous weeks.

Spanish and Italian public debt is on hold. Long-term interest rates for the public debt of both economies are finding it hard to fall any further, due more to factors of an exogenous nature (noise concerning the issue of tapering) rather than internal: the yield on Spanish 10-year bonds rose in the month by 20 bps to 4.15%. However, fiscal consolidation efforts must not be relaxed given a schedule that, in the coming year, promises to be demanding for the Treasury of both countries: Spain is facing debt repayments of close to 173 billion euros while the figure for Italy comes close to 330 billion. In spite of this, we expect a positive trend for periphery public debt in 2014, dotted with episodes of contained volatility.

Expectations of tapering are pushing up oil prices and affecting the euro-dollar exchange rate. US activity figures and the cut in interest rates in the euro area lie behind the drop in the euro against the dollar to the zone of 1.34 dollars. The expected trend in US monetary policy will continue to dominate the currencies' exchange rate within a range of
1.30-1.35. For its part the yen has depreciated against the dollar due to speculations that Bank of Japan will speed up its asset purchases as part of the Abenomics plan. Regarding commodities, Brent oil has also been affected by the drop in the supply of crude by Saudi Arabia, towards the month reaching the top of the range of 100-110 dollars/barrel. Base metals and gold have fallen significantly due to the moderate affect on their value of the decisions taken by the Fed. 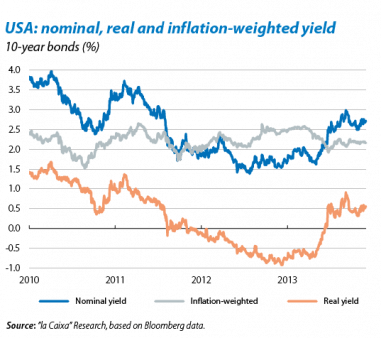 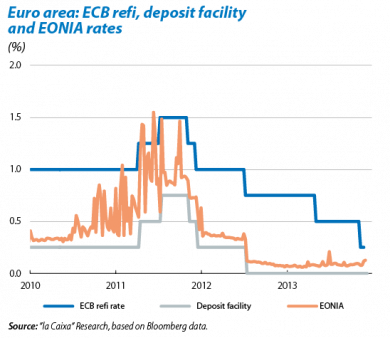 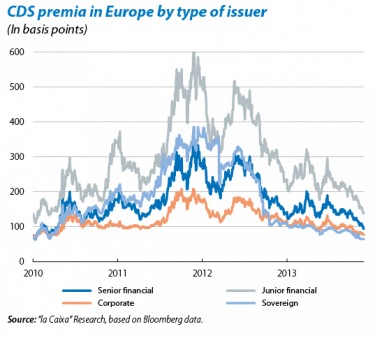 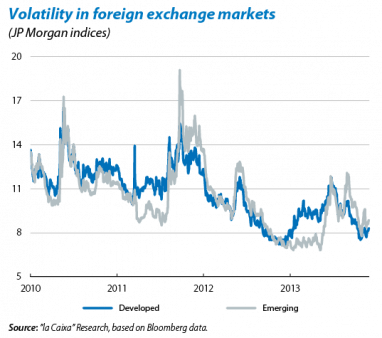 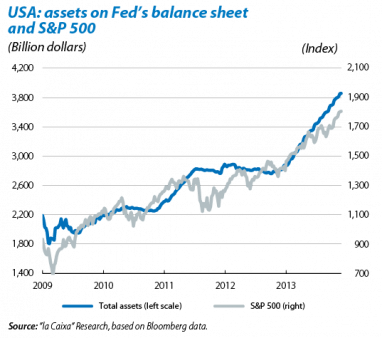