The natural rate of interest: clues, questions and some answers

The period following the bursting of the global financial bubble has been characterised by a marked drop in interest rates in the advanced economies. The fact that these have remained at such a low level for so long suggests that we might be witnessing not only a cyclical but also a relatively permanent reduction in equilibrium interest rates. This situation has potential implicationsfor the design of monetary policy, financial stability and investment decisions in the private sector. An analysisof the so-called natural rate of interest might shed some light on the issue.

Conceptually the natural or equilibrium rate of interest (hereinafter the NRI) refers to the real short-term interest rate (in practice a short rate such as the central bank's inflation-adjusted benchmark interest rate) which would be compatible with an economy operating at its full potential and with inflation stable around a specific target. For those familiar with Taylor's rule,1 NRI is merely the constant of this formula: the real interest rate that should be set by the central bank when the output gapis zero (real GDP is equal to potential GDP) and inflationis at its target level. Economic theory states that the larger the growth in productivity of an economy or the larger the growth in its population (in other words, the greater the potential growth in GDP), then the higher the NRI. Other factors such as an ageing population and regulatory changes which raise the cost of financial intermediation will tend to push the NRI down.

As it is not directly observable the NRI needs to be estimated using econometric techniques. One of the most widely accepted methods is the one developed by Laubach and Williams (2003),2 two economists from the Federal Reserve (Fed) who use a statistical tool called the «Kalman filter» to simultaneously estimate the NRI and the potential output of the US. Their estimates, presented in the graph, reveal that the NRI in the US has varied significantly over the years, that these variations tend to be quite persistent and that, at present, the NRI is around 0%, more than 2 pps below its level prior to the global financial crisis. The authors attribute part of this drop, around 1 pp, to a fall of similar size in the potential growth of the US economy while the rest would be a consequence of the combination of other factors which they do not explicitly identify, such as an ageing population. This apparently new NRI level suggests that the final point of the cycle of benchmark interest rate hikes started by the Fed may be slightly lower than in previous cycles. So the «new normal» of interest rates could mean that the benchmark rate is around or below 3% in the long term, a level that is higher than the one taken into account today by agents operating in the US bond market, namely close to 1.5%. In the past along-term benchmark interest rate of around 4%-4.5%was considered to be normal.

Confirmation of this scenario would introduce, first of all, a limiting factor on the leeway of conventional monetary policy to act when the economy is in difficulty (it is easier to reach the bottom level of 0% when a cycle of reductions starts with benchmark interest rates at 3.0% than at 4%-4.5%). In such a world, having to resort to a non-standard monetary policy would bemore customary. On the other hand, the expected intensification of financial flows in search for yield could also have adverse consequences on financial stability. Although NRI estimates are accompanied by a high degree of uncertainty, it is worth considering the implications for monetary policy of a permanently low interest rate scenario.

1. See, for example, the Focus «Discovering monetary policy in the shadow» in this Monthly Report. 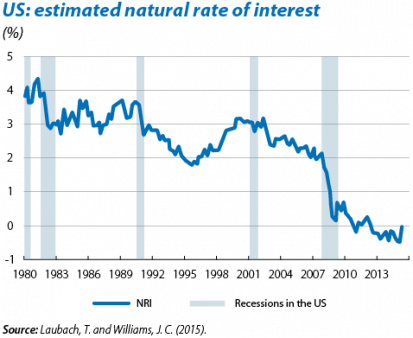