Setbacks on the road: old obstacles and new challenges

The reappearance of instability towards the end of April is raising some questions. April witnessed marked contrasts in the trend of European financial markets. Early in the month the overriding trend was firmly upwards for European risk asset prices thanks to buoyant investor sentiment after the start-up of sovereign QE and positive figures regarding the euro area's growth. However, this favourable pattern which started at the beginning of the year was halted towards the end of the month due to the intensification of Greece's liquidity problems and the entrenchment of negotiations between the Greek and European authorities. In the US, unlike the situation in Europe over the last few months, the weakness of cyclical indicators has been keeping stock markets hesitant. The slightly disheartening outlook for corporate earnings in the next few quarters may limit any revival in the upward momentum of US stock markets in the short term. Given this indecisive situation, the steps taken by the Federal Reserve (Fed) in terms of monetary normalisation have become even more relevant.

This pause in international markets might continue for some time especially if the situation in Greece shows no sign of improving. Although the volatility of financial assets is still low, according to both technical and sentiment indicators we must continue to be cautious, especially in Europe. In our opinion, in the short term we are much more likely to see modest, intermittent changes in European risk assets than a continued rally. On the other hand emerging assets have performed relatively better than developed assets, this constructive climate largely being supported by the involvement of the Chinese authorities in easing monetary and financial conditions, together with the cautious message contained in the Fed's more recent communications. However, the widespread situation in the emerging bloc is one of weakness and the current calm may give way to moderately intensive fluctuations.

Europe's public debt market is buffeted by contrasting forces. The Greek government's increasingly pressing liquidity problems have increased outflows of capital towards core debt and pressure to sell periphery sovereign debt. The effect on the spread of Spanish, Italian and Portuguese debt has been contained, however. With a view to the coming weeks, this greater volatility will continue due to the difficulties caused by the negotiations between Greece and European institutions. Nevertheless, we do not think there will be a sustained severe deterioration in periphery debt. This view is justified by the good performance by the public debt purchase programme of the European Central Bank (ECB) and the increasingly strong signs of growth in the euro area.

Meanwhile, the ECB repeats that it is firmly committed to implementing sovereign QE. At the last ECB meeting, Mario Draghi stressed that the public debt purchase programme will continue until at least September 2016, at the same time denying that there was a shortage of European bonds in the market and ruling out the possibility of lowering the deposit facility rate. However, it seems clear that the ECB is giving itself room to manoeuvre so that it can be flexible enough to act should the circumstances so require. We believe that sovereign QE ending before September 2016 is highly unlikely but it cannot be completely ruled out if growth and inflation continuously outperform expectations. So far Europe's monetary authority has acquired 85 billion euros in public debt, in line with the monthly target set at around 45 billion.

The Fed continues to convey caution given the weak economic figures in 2015 Q1. At its meeting at the end of April, the Committee presented a less favourable interpretation of the US economic situation. The monetary authority's communication highlights the slowdown in activity over the winter, as well as the recent moderation in the pace of job creation. However, the Fed members have pointed to the temporary nature of this weakness, largely a consequence of meteorological factors and strikes at ports on the west coast of the US, so they continue to predict moderate growth in the medium term. This interpretation reinforces our scenario of a slow, gradual normalisation with the first official interest rate hike in Q4. Nevertheless, the elimination of forward guidance by the monetary authority could make US asset prices more volatile, increasing their exposure to the trend in business indicators. In this respect, we expect the incipient upswing in yield for US public debt to continue in the medium term, especially because of improved inflation expectations, although this might happen intermittently.

The recovery in investor flows pushes up emerging asset prices. April saw a significant rally in emerging risk asset prices, as well as further drops in yields on their public debt. There are three main factors behind this trend. Firstly, the Fed starting to raise official interest rates later than expected, momentarily turning investor appetite back towards emerging assets. Secondly, the upswing in oil has slightly lessened the doubts hovering over the finances of some oil-producing countries. Lastly, the expansionary policies adopted by the emerging countries have also contributed to this situation, particularly the active stance adopted by the Chinese authorities. The People's Bank of China has cut the reserve requirements for its local banks by 100 bps, to 18.5%, the second reduction since March in order to stimulate credit. At the same time the monetary authority has also approved a new credit facility aimed at boosting demand for bonds issued by local Chinese corporations given their difficulty in refinancing their debt. This accommodative stance by emerging central banks has been confirmed by decisions taken in Russia and Thailand while, at the other end of the scale, Brazil's central bank has maintained its restrictive policy to control inflationary pressures.

The stock markets of the advanced countries take a break. The optimism prevailing in Europe's stock markets since the start of the year has given way to a predominantly cautious climate, mainly caused by the re-emergence of fears regarding Greece's solvency. On the other hand, the gradual disappearance of the factors originally causing the stock market rally (expectations and start-up of QE, improved economic outlook in the euro area) has also taken the wind out of the stock markets' sails. At the same time, the over-buying shown by European indices and increasingly demanding share price ratios (P/E ratio) have led to stock market losses. Nevertheless, we believe Europe's stock market will pick up again thanks to the growth expected in earnings and a scenario of greater traction for activity. In the US, although it is true that the corporate earnings downgrade will not help matters, the chance of there being some positive surprises is still considerable. A premise that is also valid on the macroeconomic front, especially after the weak growth figures for the US economy in Q1.

The central banks will continue to monitor trends in the dollar and oil price as both will have a notable effect on inflation in 2015. In April, both factors played an important role in the behaviour of prices. Regarding currencies, the turnaround in the dollar's appreciation is worthy of note, falling by 6% against the euro from its peak value reached in March (from 1.05 to 1.12 dollars per euro). This weakening in the dollar has also been seen against emerging currencies, providing temporary relief for those countries with a high level of debt issued in the US currency. However, we expect the dollar to start to appreciate again in the remainder of the year. With regard to oil, April saw a 21% rise in the Brent barrel price, up to 66.8 dollars. The gradual increase in the price of crude forecast up to the end of the year will continue to help inflation pick up worldwide. 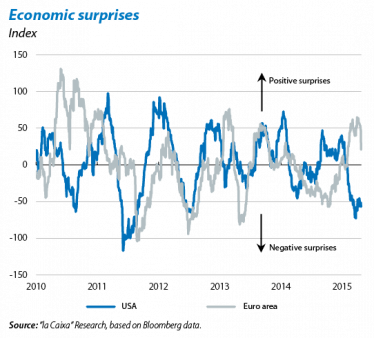 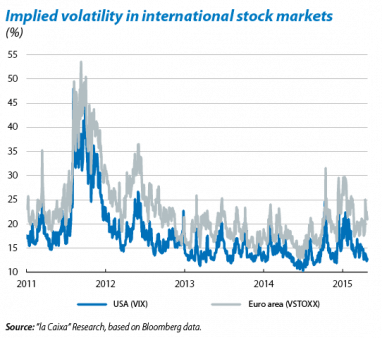 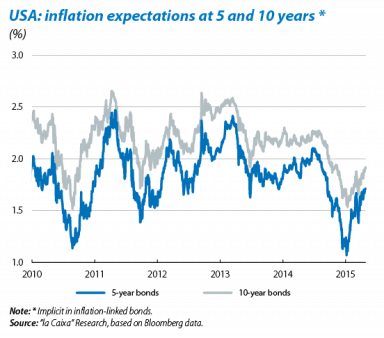 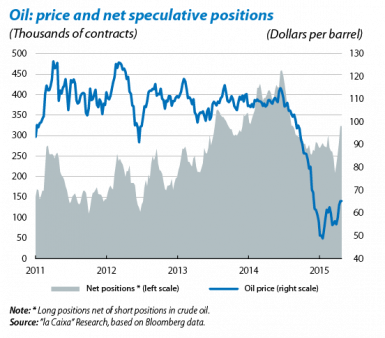