Financial markets remain calm during the month of April. Although the main sources of risk have not disappeared, investors believe they have now entered a phase of greater stability. Having successfully weathered a few storms early in the year, the financial and economic environment of the emerging countries is now tending to improve while good news has prevailed in the US and euro area. Of note in the Spanish markets is the further drop in interest rates on the country's sovereign debt.

In China, investors' fears of a hard landing for the economy have eased after the publication of the latest indicators. The GDP figure for Q1 was within a reasonable range of deceleration, responding to the rebalancing of the economy towards a model of growth in which domestic demand will play a larger role. The country's monetary, fiscal and macroprudential policies also have a lot of leeway which the government has already started to take advantage of, which will help to contain any setbacks that may arise along the way.

Conditions are developing satisfactorily in the rest of the emerging countries, albeit with some notable exceptions. For the second time this year, the Brazilian monetary authorities raised the official interest rate, this time to 11% in an attempt to slow up inflation. In Russia, immersed in a geopolitical conflict with the Ukraine and exposed to sanctions by the West, the central bank raised its official rate by half a point to 7.5%. With this measure, the authority hopes to limit capital outflows and control rising prices. This movement was after Standard & Poor's reduced Russia's credit rating to BBB–, one step away from a junk bond. The agency is concerned about the economy's great dependence on energy exports and the dangers posed to investment and domestic consumption by any further international sanctions.

Investors appear to trust the central banks in the developed countries. Signs of economic revival in the advanced countries and expectations that easy monetary conditions will continue are creating a favourable environment for risk assets in general and sovereign debt in particular, especially from the periphery of the euro area. The latest data from the US confirm the solidity of the economy's growth, leading to a slight upswing in yields in the short and medium-term tranche of the curve although these are still very low. In fact the Federal Reserve, through its monetary message regarding official interest rates, is managing to keep long-term interest rates below 3%. The trend in sovereign debt in the euro area has been affected by the ECB's willingness to adopt additional expansionary measures, particularly the possibility of buying up public or private bonds, and yields on the German bund and on periphery public debt have fallen given the monetary authority's repeated messages in this direction.

The Federal Reserve maintains the direction of its monetary policy. At its April meeting, the institution decided to continue its strategy of gradually withdrawing monetary stimuli: trimming a further 10 billion dollars off its monthly bond purchases (now at 45 billion) and keeping official interest rates exceptionally low. However, the Fed's latest statements hint that the institution's actions will be in line with the expected trends in two key variables: (i) the progressive rise in inflation towards its medium-term target of 2% and (ii) the unemployment rate moving towards the level of full employment set by the monetary authority (around 5.5%). Projections based on current trends point to mid-2015 being the time when the institution will start to raise interest rates, not too far in the future and, moreover, likely to be brought forward. This will undoubtedly become a key issue in the second half of this year.

Meanwhile investors are focusing their attention on the ECB's potential quantitative easing plans. At its April meeting, the Governing Council decided to keep the official interest rate at 0.25% and refrained from using any unconventional monetary policy instrument. Statements made by several of the institution's members in favour of a hypothetical asset purchase programme (government and private bonds) and Draghi's explicit messages in this respect have heightened expectations of the ECB actually taking action. Although the scenario of economic recovery predicted by the ECB is slowly consolidating, the use of additional expansionary instruments could be warranted depending on the trends in some fundamental factors. Firstly, if inflation remains very low for too long. Secondly, if the euro continues to appreciate. And thirdly, if there's an unwanted spike in interbank rates. In fact, towards the end of April there was an upswing in the money market rate, the EONIA, as a result of banks continuing to reduce their surplus liquidity with the ECB. However, any programme to purchase public and/or private debt (bank securitisation) would entail difficulties and is not without a number of limitations.

Europe's periphery makes further progress. The improvement in the euro area's economic and financial scenario is particularly influential in pushing down risk premia for the region's periphery countries. Some notable events took place in April. On the one hand, the main ratings agencies improved their classification for both Italy's and Spain's sovereign debt, pointing out their economic and financial strengths and the improvement in public accounts, as well as the improved situation of banks. Such news has helped Spain's Treasury auctions even further, if possible, managing to place ten-year debt at a cost of 3.06%, another all-time low. The government has also announced that it will need to borrow less in 2014 thanks to higher tax revenue and lower debt financing costs. On the other hand, Greece and Portugal have successfully returned to the international capital markets with two issuances of five and ten-year bonds, respectively.

Global stock markets remain relatively stable. The risk entailed by the crisis between the Ukraine and Russia (its lower credit rating and the hike in official interest rates) and the high price-earnings ratios (PER) in the main stock markets of the US and Europe have hindered gains in equity. However, several aspects are underpinning the stock markets in developed economies. The first is the confirmation that corporate earnings are in line with business indicators. To date, 71% of the S&P 500 companies that have published their earnings have exceeded analysts' expectations. This trend is similar in Europe although the growth in earnings and sales is somewhat lower. In Spain, the Q1 earnings campaign that is just starting is expected to continue the upward trend shown in 2013 (see the Focus: «The earnings of Spain's listed companies exit the crisis»). The second aspect is the increase in news of global corporate operations (either confirmed or rumoured). The last few weeks have seen an acceleration in the number of potential mergers and also their size, particularly in the pharmaceutical sector. A third aspect comes from investor expectations of the ECB possibly adopting more monetary stimuli. For the emerging economies, financial normalisation has helped their stock exchanges to perform well, with the exception of Russia's stock market.

Corporate bond markets are on the up again. As happened with sovereign debt, once the markets had overcome the upswing in spreads due to tensions between Russia and the Ukraine, credit risk premia have fallen back to very low levels. There are three main reasons for such favourable conditions for the corporate bond markets. First, the good growth prospects in the US and EMU. Second, the reduction in corporate defaults. And third, the large amount of global liquidity and low interest rates. Additionally, in April there were also expectations that the ECB would start a QE programme, which would push down credit premia especially in the current context of a great «search for yield». It therefore comes as no surprise that, given this situation, certain portions of the capital markets, such as high-yield US bonds, are starting to show signs of overheating, something which should be carefully monitored. Albeit to a lesser extent, Europe has also seen its rate of corporate bond issuances speed up. Since the start of the year, the total issued has grown by 15% year-on-year to 45 billion euros, especially among companies in the periphery. 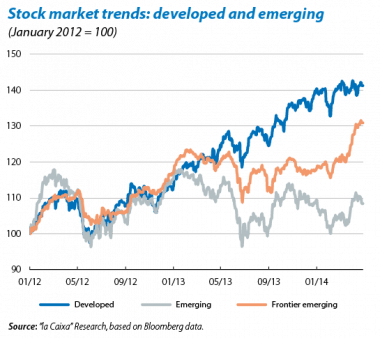 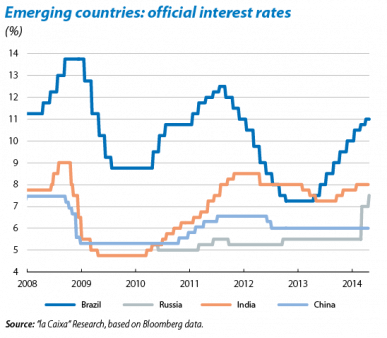 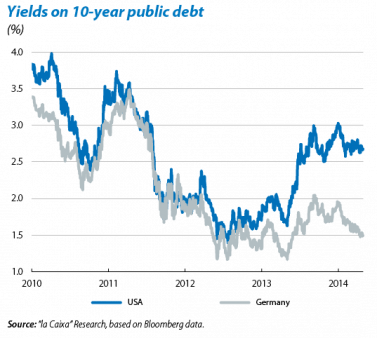 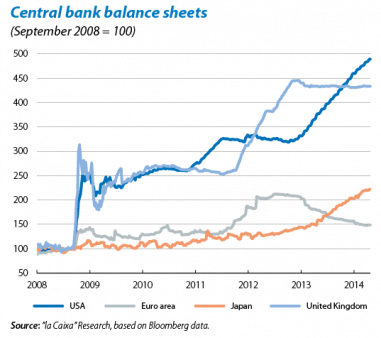 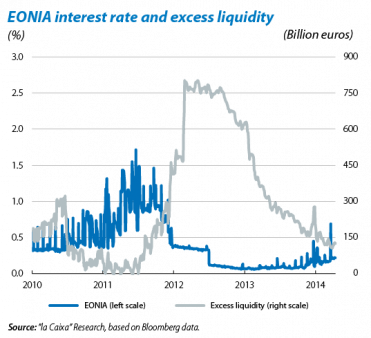 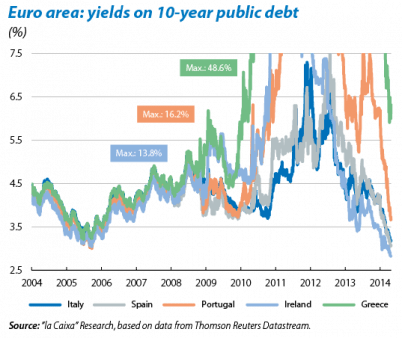 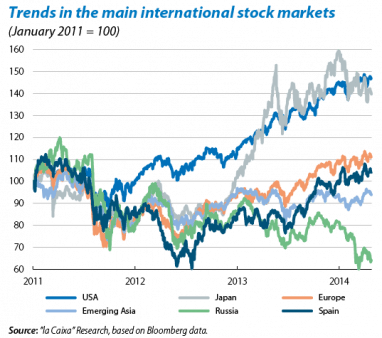 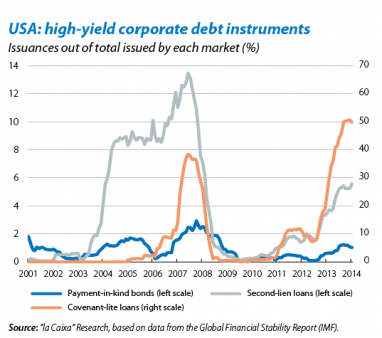