A start to the year affected by contrasts

The ECB dispels doubts regarding its monetary strategy but other questions still remain on the horizon. The start of 2015 has been dominated by volatility, mainly fed by three aspects. The first, oil prices falling even faster and their impact on global inflation expectations. The second, the uncertainty surrounding the outcome of Greece's elections. And the third concerns the defensive actions of several central banks given expectations of an imminent start to quantitative easing (QE) by the ECB. Nonetheless, this last question was successfully resolved towards the end of January: the ECB has launched an ambitious expansionary programme that includes the purchase of sovereign debt to avoid deflationary risks and boost the region's economic growth. Reinforcing the euro area's monetary conditions, which are already very lax, will provide a clear push for European risk asset prices. However, the many different sources of potential risk and growing divergence in monetary policy at a global level will keep volatility high.

The Federal Reserve is on hold. The Fed's first meeting of the year provided few surprises. The institution stressed the US economy's solid growth, highlighting the strong improvement in the rate of job creation, household consumption and business investment. However, it also admitted that inflation is still very low due mainly to falling energy prices. Given this situation, the authority maintained the official rate at its current level (0%-0.25%) and noted
that it will take into account the information obtained from various variables (global economic growth, inflation, the currency and international events) to determine how long ultra-lax conditions should last. In any case, the Fed repeated that it will be «patient» before starting monetary normalisation. In short, the Fed has opted not to hurry and is waiting before toughening up its discourse. In this respect, we expect the monetary authority to stick to its plan and therefore expect the first interest rate hike in November, in line with the consensus of investors.

The ECB is keeping to the script and will start up its sovereign debt purchases (QE) as from March. Given the deterioration in inflation expectations and the limited effectiveness of the measures adopted so far, the ECB's Governing Council has enlarged its asset purchase programme. Specifically, monthly bond purchases will total 60 billion euros and will be made up of sovereign debt (government bonds, debt from national and European agencies) and private debt (already existing covered bond and ABS programmes). Of note among the positive aspects is the overall size of the programme (1.1 trillion euros) and the possibility to extend it beyond September 2016 if inflation fails to show any signs of moving towards its medium-term target (2%). One drawback is the high credit risk that must be assumed by national central banks (80% of the purchases of public and national agency debt). In the medium term, these expansionary measures should increase inflation expectations and improve both bank aggregates and activity.

The Swiss central bank (SNB) has announced it will no longer peg the Swiss franc to the euro. The essential reason for this decision is the great difficulty the Swiss monetary authorities would face if they had a fixed minimum exchange rate (1.20 francs per euro) once QE is implemented in the EMU. This totally unexpected action by the SNB resulted in the franc appreciating by 13% and 10% against the euro and dollar respectively up to the end of January, and caused a large amount of volatility in foreign exchange markets. The SNB also cut the official deposit rate to –0.75% with the aim of imposing easier monetary conditions and attempting to contain the unfavourable effects of the franc's appreciation. The SNB is not the only monetary institution to cut interest rates. The central banks of Denmark and Canada have also followed suit: the first in order to contain the appreciation of its currency and the second because of disinflationary pressure.

Treasury bonds gain from global volatility. The effects of the Swiss central bank's action on foreign exchange markets, the threat of global deflation and uncertainty regarding the Greek elections resulted in a flight to quality in capital flows towards US debt. Aspects of a domestic nature, such as the absence of inflationary pressure via wages and the moderation in expectations of an interest rate hike by the Federal Reserve have also pushed down US sovereign yields. However, and with a view to the coming quarters, the good tone of US economic activity should help the yield on medium and long-term bonds to pick up.

The markets welcome the ECB's decisions. Although investors had been expecting some kind of action by the European authority since the end of December, the announcement of sovereign QE in the euro area, more aggressive than expected, has further pushed down bond yields, both for core and periphery countries. Yield on the German bund has fallen to an all-time low, below 0.4%. Similarly, and encouraged by uncertainty regarding the future policy of Greece, the short tranches of the public debt of some countries such as Germany, the Netherlands and France are offering negative yields. In the periphery, the impact of the announcement of the ECB's measures led to reductions in the internal rate of return throughout all tranches, narrowing spreads and flattening curves. Of note was the historical drop in yield on Spanish ten-year bonds to 1.38%. With regard to Greece, the coming to power of Syriza has revived investors' fears, leading to sharp rises in yields on Greek public debt and substantial losses on the Athens stock market. These losses have been further intensified by liquidity tensions in the financial sector. However, it is important to note that this has not spread to the rest of Europe's periphery debt, thanks partly to the start-up of sovereign QE by the ECB.

Easy monetary conditions are spreading to the emerging bloc. Falling commodity prices, especially oil, have reduced inflationary pressures at a global level and some emerging central banks have taken advantage of this situation, such as India which has surprisingly lowered its interest rates. The deterioration in Russia's macroeconomic and financial environment is starting to affect both its corporate and banking area. Growing tensions related to solvency and liquidity in the financial sector are a source of vulnerability for the Russian economy and might be aggravated by a downgrade of its sovereign rating. Given this scenario, Russia's central bank has unexpectedly lowered its official interest rate by 200 bps to 15%. The case of Brazil, however, is an exception to this situation of interest rate cuts, raising its official interest rate by 50 bps to 12.25%.

The ECB's measures give a boost to equity. The start of the year has been affected by an increase in the frequency and scope of episodes of volatility. The sharp fall in the price of crude, the unexpected actions of some central banks, the slowdown in the Chinese economy and threat of global deflation were arguments enough to reduce investor confidence, who switched to safer assets such as public debt. However, the trend in the main stock market indices, and European indices in particular, picked up after the ECB announced the enlargement and duration of its asset purchase programme. In short, these factors have pushed the corporate earnings season of 2014 Q4 into the background. S&P 500 firms as a whole have performed well so far, although less than in previous years due to the decrease in earnings of energy firms and the effect of the dollar's appreciation. On the other hand, for the euro area we expect the enlargement of the ECB's balance sheet and the depreciation of the euro will act as important levers
to improve corporate earnings.

The depreciation of the euro intensifies. The announcement of the ECB's monetary expansion increased the depreciation of the euro against the main currencies. The European currency reached 1.11 dollars, its lowest value in 11 years although it rebound a few days later, reaching around 1.14 dollars. The divergence between the ECB and Fed's monetary policies suggest that the euro will tend to continue its depreciation this year, although contained expectations of the normalisation of US interest rates may reverse this trend from time to time. With regard to commodities, the price of a barrel of Brent oil has continued to fall, reaching around 50 dollars. Falling copper prices are another significant reference, the price being pushed down by more moderate prospects for world growth. 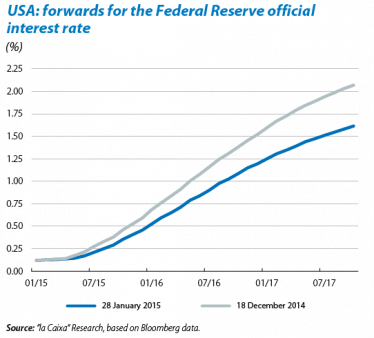 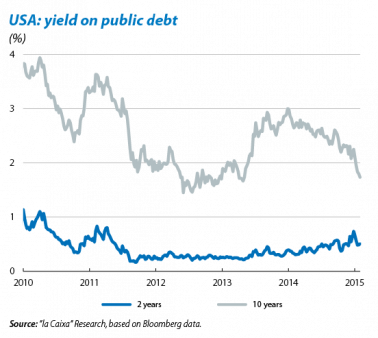 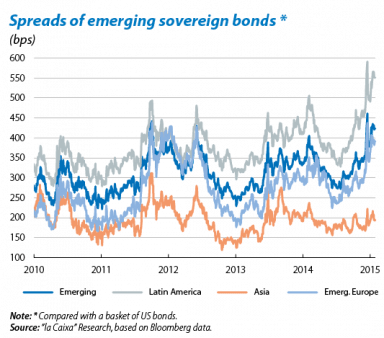 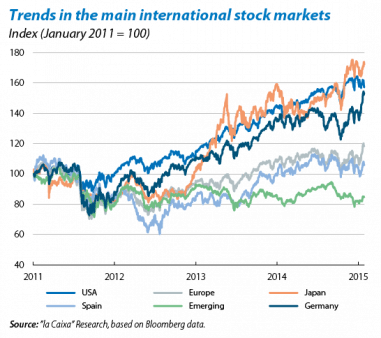 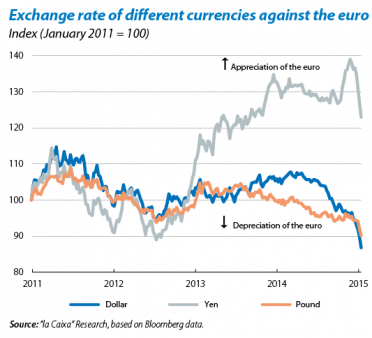