International markets are consolidating the upward phase started in February. In particular, European stock markets have once again come to the fore on the international financial scene. As happened last month, the continuation of expansionary policies on a global scale together with the increasingly firm pulse of Europe's economy have sustained this favourable dynamic. Regarding the first aspect, of note is the start-up of quantitative easing (QE) by the European Central Bank (ECB) and the Federal Reserve (Fed) repeating that the rate at which it will normalise its monetary policy will be slower than expected. With regard to the second, the fact that expectations concerning monetary actions are helping to improve the euro area's economic sentiment indices is a notable event in itself. However, the current boom in financial markets still has some weak points, the main threat coming from the complex financial situation faced by the Greek government, an as-yet unresolved source of risk. We expect this uncertainty to disappear once an acceptable agreement has been reached for all those concerned.

The Fed removes the word «patient» from its speech but slows up its planned rate of official interest rate hikes. March's meeting of the monetary authority brought about a modification in its forward guidance. As had been expected, the Fed removed the term «patient» and replaced it with the statement that it will be appropriate to raise the target range for the federal funds rate «when it has seen further improvement in the labor market and is reasonably confident that inflation will move back to its 2 percent objective over the medium term». Although this change leaves the door open to a possible interest rate hike in June, the downward revision of forecasts for growth, inflation and the level of the official interest rate for the next three years suggests that the institution will not make a move until after the summer. In this respect, the loss of steam in US activity in the first quarter is in line with a scenario of slow but gradual increases in interest rates.

The ECB starts to buy up sovereign debt in the euro area. After the March meeting of the ECB's Governing Council, the President, Mario Draghi, provided further details on the euro area's sovereign debt purchase programme. In addition to repeating its commitment to monthly purchases totalling 60 billion euros (among public and agency debt, covered bonds and ABS) up to September 2016, Draghi also announced that purchases would start on 9 March and that bonds with yields below the deposit facility yield (–0.20%) would not be eligible. In the first three weeks of the programme, the ECB acquired 41 billion euros of public debt securities, a figure that is in line with the monthly target set by the institution (close to 45 billion a month). The emergence of a large buyer of bonds such as the ECB has intensified the downward movement of yields on public debt from the euro area. In turn this has led to a sharp increase in the number of bonds with negative yields, up to 1.6 trillion of euros. Approximately 30% of this figure corresponds to German sovereign debt, offering negative yields on maturities of up to the seven years.

At the same time, the ECB also revised upwards its forecasts for growth and inflation. The improved  macroeconomic situation suggested by a large number of sentiment indicators notably limits risks regarding the potentially limited supply of bonds in the sovereign market. We believe that, as the recent favourable trend in inflation and growth expectations consolidates, such doubts will start to fade. The signs from monetary and credit aggregates are also encouraging while the good figures posted by requests for funds from banks in the ECB's third TLTRO (98 billion euros) point to a scenario of gradual recovery in the demand for credit.

The global expansionary turnaround continues thanks to the emerging economies. The slowdown in developing economies, together with deflationary pressures intensified by low energy prices, have encouraged emerging central banks to turn towards more accommodative policies. Of note is the cut in the official interest rate for loans by China's central bank (to 5.35%) with the aim of keeping its economic slowdown under control. For its part, falling pressure on the rouble has helped Russia to lower its interest rates by 100 bps, down to 14%. However, this strategy will tend to lose ground as the first interest rate hike by the Fed approaches.

The Fed's accommodative tone slows up Treasuries. The expectation that the institution may postpone its first interest rate hike until after the summer and confirmation that Committee members prefer an environment with lower interest rates pushed down yields on public debt, mainly in the long tranches. The more moderate message regarding growth and inflation pushed the ten-year bond beyond the barrier of 2%. In the medium term, yields on US bonds should recover as debate livens up concerning the normalisation of the reference interest rate and the first signs of recovery in inflation are observed. However, should activity indicators remain sluggish and investment flows arrive in a search for yield (given the effects of Europe's QE), this might delay the upturn in Treasury yields.

The start of QE by the ECB helps to narrow European spreads even further. One of the doubts resulting from the ECB's purchase programme is the possible accentuation of divergences between countries (periphery versus core) and maturities (long versus short tranches). With regard to the former, yields on periphery sovereign debt have also recorded widespread drops, with the ten-year interest rate for Spain and Italy reaching an all-time low in March (1.27% and 1.31%, respectively). However, these picked up slightly in the final part of the month thanks to the improvement in economic indicators and renewed doubts concerning the Greek problem. Lack of agreement in negotiations on the reforms that Athens must implement is keeping Greek debt under pressure. Given the complex liquidity situation of Greek banking, and with many of its government bonds maturing in the very near future, there is little room to manoeuvre to secure a definitive agreement.

European stock markets are benefiting from a tail wind. After a somewhat hesitant start to the year, the upward trend in the main stock markets consolidated in March. This context of greater risk appetite has been particularly beneficial for European shares whose gains have been supported by three factors: the start of QE by the ECB, the improved economic outlook for the region and the boost provided for exports thanks to the euro's depreciation. The performance of US stock market indices has been more tenuous, however. Although the Fed's more prudent message regarding interest rate hikes has boosted the market for shares, the strength of the dollar has led to doubts concerning future trends in corporate earnings. Given this situation, the European stock markets are likely to continue performing better than the US stock market. However, this depends on the European economy remaining firm and on a favourable resolution of the Greek issue.

Corporate bond spreads pick up after QE starts in the euro area. Unlike the good performance by Europe's public debt, a less favourable trend has been observed in corporate bond markets. The rise in risk premia for this kind of asset can largely be attributed to the sharp increase in the volumes of debt issued over the last few weeks. Nonetheless, we believe this is only temporary and does not represent a sustained period of deterioration. One aspect that is worth noting in the private debt market is the increase in euro-denominated debt by US issuers (see the Focus «Debt issuances in foreign currencies: the euro comes to the fore»).

Greater instability in the foreign exchange market. The start of sovereign QE has led to a larger depreciation in the euro than expected, its value against the dollar falling to the lowest in 12 years (1.049 dollars). However, this trend switched after the conclusions of the FOMC, helping the dollar to drop against a basket of the main currencies. In the emerging bloc, the adoption of expansionary strategies is increasing tension on their currencies. Of note is the case of the Turkish lira, depreciating by almost 10% against the dollar for the year to date. 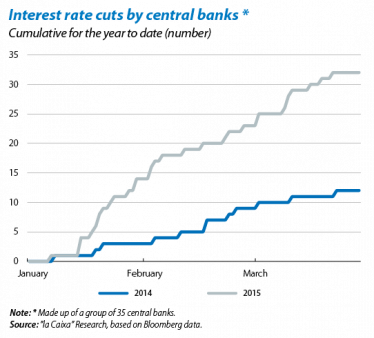 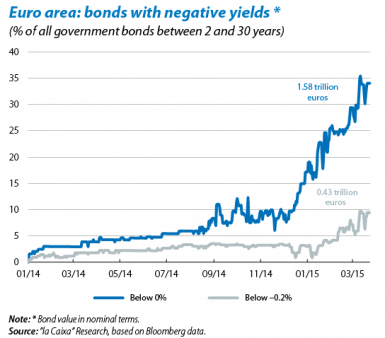 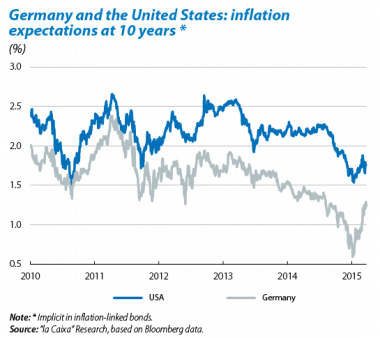 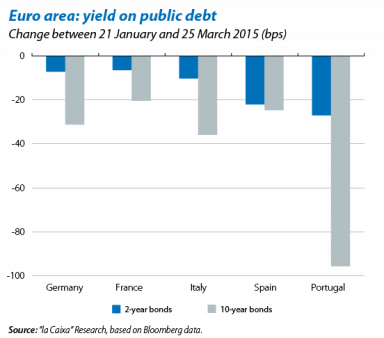 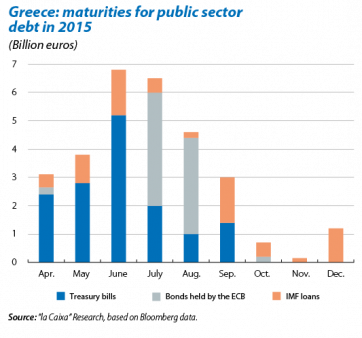 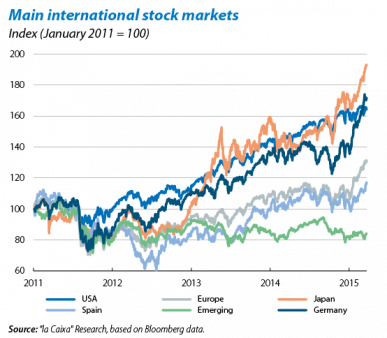 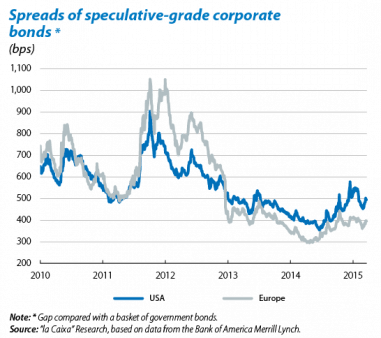 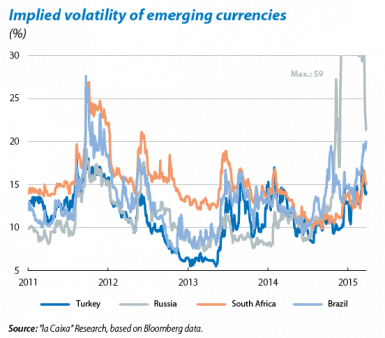