The Treasury takes advantage of opportunities to issue bonds

Last year, when tensions in Europe's debt markets were at a peak, the Treasury auctions were scrutinized very closely. Demand, price, maturities, degree of participation by foreign investors... All the details were analyzed minutely to assess the confidence of international investors in the Spanish economy. Now the conditions have changed but to what extent has confidence returned?

In the first five months of the year, the Treasury's bond issuance rate has beaten the records of the last few years. In May, the volume reached 23,624 million euros (11,046 in May 2012) covering almost half the financing needs expected for the year, which we estimate at 240 billion euros. In the case of long-term bonds, this coverage reaches 53.3%, a clearly higher proportion than that of previous years, which was below 45%.

Moreover, this faster rate of issues has not been carried out either at the cost of raising the price or reducing the maturities; quite the opposite, in fact. Regarding price, the lower cost of financing new issuances pushed the average interest rate for the debt down to 3.84% in March, 6 basis points less than at the end of last year. With regard to maturities, the average length of the debt in circulation stabilized in the first quarter of 2013 at 6.3 years, putting an end to two consecutive years of decreases. The auctions carried out in April and May have consolidated these trends.

The assessment of the other key element, namely the degree of participation by foreign investors in the auctions, is also very positive. Over the last few months, the percentage of Spain's public debt in the hands of non-residents has once again risen, reaching 38.7% in March (after hitting its lowest level in August 2012 at 33.5%). In the 10-year syndicated bond sale of 14 May, for example, this participation reached 48%.

The overall assessment must therefore be very positive but some words of caution are nevertheless required. Not all the improvement in financing conditions is due to a better perception of the Spanish economy. Easier monetary conditions worldwide have been crucial, as well as the ECB's explicit support to do whatever it takes to preserve the unity of the euro. The Treasury has done well in taking advantage of the conditions but Spain's economy will not fully regain the confidence of international investors until it has completed the adjustment and presents a sustained rate of growth at acceptable levels. 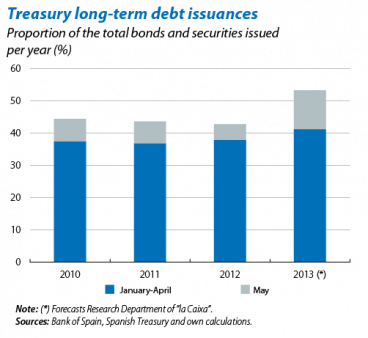 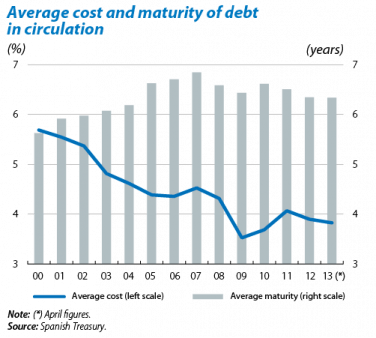 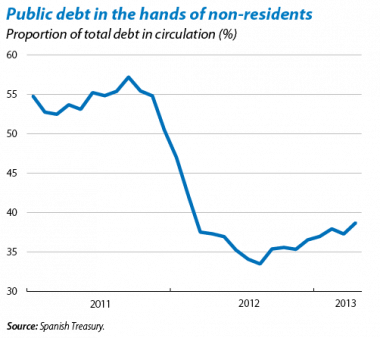