The trend in commodities: a long-term view

Over the last few decades the trend in commodity prices has been the object of recurring debate in international academic, financial and political circles although the intensity of this discussion has been intermittent: greater during periods of sharp rises or falls in prices and less so at more stable times. Round about the financial crisis of 2008 there was therefore a highly agitated period due to the dramatic rise and slump experienced simultaneously by numerous commodity prices. The last two years have been much calmer, helping to evaluate the medium and long-term dynamics without the distortions, and particularly the short-sightedness, inherent in volatile periods getting in the way. The overriding view in 2008, still very widespread today, is that we are witnessing abnormally high prices in historical terms for commodities in general. However, an analysis of the series of prices in real terms shows that this impression is misleading. Price increases over the last fifteen years have converged towards the average long-term level for commodities as a whole while there is also a notable discrepancy in patterns between different products when these are examined in perspective.

Certainly, since the start of the 21st century, the rise in prices in real terms (deducting the general inflationary component) has been acute in almost all commodities. But we must remember that, in the previous period between the middle and end of the 1990s, these products recorded their lowest prices in decades and in some cases were at an all-time low. Two questions spring immediately to mind: what causes such long-term fluctuations in commodity prices, and is this behaviour likely to be repeated after a specific period? Several academic studies have attempted to answer these questions, identifying the presence of long and short-lived cycles caused by the dynamics of supply and demand in each market. These, in turn, have been heavily influenced by the episodes of accelerated economic growth occurring throughout history: the industrial revolutions of the 19th and 20th century, the (re)urbanisation in western countries after the Second World War and the vigorous expansionary cycle of emerging economies starting at the end of the last century. In fact, the economist D. Jacks documents that long-term commodity cycles, in the jargon known as «supercycles»,1, 2 are periods lasting between 30 and 35 years on average, whereas short-term cycles generate fluctuations around the long-term component, lasting between approximately 4 and 5 years, and are thereby fundamental to explaining volatility and bubbles forming and bursting.

In supercycle terms, not all commodities have evolved in the same way, in accordance with the patterns of supply and demand specific to each market. Commodities are normally divided into four broad categories: energy (oil, gas, coal, etc.), metals (copper, steel, zinc, tin, gold, silver, etc.), industrial raw materials (rubber, resin, cotton, leather, etc.) and foods (cereals, oils, animal fats and meat, etc.). Energy products, dominated by crude oil, and metals are the groups recording the highest rises in real prices from a long-term perspective while, at the other end of the scale, we find industrial raw materials and foods, which have experienced a notably downward trend. Two important determining factors help to explain this divergence. In terms of demand, the composition of global growth has pushed up the price of energy and metals over the last 20 years and enhanced differences. In particular, since the middle of the 20th century the countries that today make up the so-called developed block have based most of their growth on an expansion and extension of the services sector, as well as manufacturing with a high technological component. This contrasts with the strong expansionary cycle undertaken by emerging countries at the end of the 1990s, characterised by the intense use of production factors related to energy, metals and their derivatives. For its part, the demand for agricultural commodities has seen slightly smaller rises than the aforementioned cases as the tendency to consume these products tends to decrease as a country leaves behind the initial stages of economic development and progress. Regarding supply factors, the rising cost of extracting and exploiting energy and mineral resources, often located in regions with considerable geopolitical conflict, helps to keep prices at higher levels, in turn making them less able to adjust when faced with sudden changes in the patterns of demand (or, which is the equivalent, making supply relatively inelastic). Conversely, the supply of food products and crops (cotton, etc.) is generally better able to adapt to fluctuations in demand due to lower fixed costs and greater flexibility in intermediate factors of production. In addition, the strong gains in productivity made by agriculture after a wave of technological and organisational innovations from the Green Revolution have consolidated these products' weakness in price terms over the last few decades.

Notwithstanding these differences in the dynamics of supercycles, the beginning of the new century also saw the start of a period of greater correlation between prices.3 One possible explanation lies in the technological changes in processes leading to an increasing use of common inputs (especially energy itself) in extracting or producing different commodities.4 But a more plausible explanation for this greater correlation is commodity «financialisation». Professional portfolio managers and institutional investors have always tried to allocate part of their funds to acquiring commodities, attracted by the low correlation that, historically, has been observed between these and traditional financial assets (equity and bonds), thereby helping to diversity the risk of their portfolios. Since the mid-2000s, this possibility to diversify has become available to reatail investors thanks to some innovations such as derivatives (futures and options) and ETFs (exchange-traded funds) for commodities. Paradoxically, correlations have increased precisely due to the growth and popularity of these instruments. Indeed, «financialisation» has led to even greater volatility and correlation in commodity prices over the last few years due to contagion from other parts of the financial markets, sometimes distorting the normal functioning of the mechanisms of end supply and demand.5 Many empirical studies show that such pseudo-financial flows affect the conditions of commodity markets in the short term but are not conclusive when establishing a cause and effect relationship between the degree of «financialisation» of commodities and the medium to long-term level of prices. Moreover, some of the recent reforms made to the international financial system have reduced the links between commodities and financial markets. For example, the new rules regarding operations in derivative markets and restrictions to proprietary trading by banks. Some signs are already pointing in this direction: according to data from the BIS, the outstanding balance of over-the-counter (OTC) derivatives on commodities at the end of 2013 totalled 2.21 trillion dollars, below the figures of 2.6 trillion at the end of 2012, 2.9 trillion in 2009 and the peak of 8.5 trillion reached in 2007.

In summary, both from the point of view of supercycle dynamics and the effect of «financialisation», the forces expected in the coming years point to much more stable prices (in real terms) than those observed over the last fifteen years, in line with the historical averages. 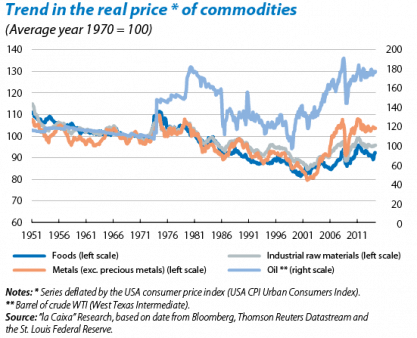 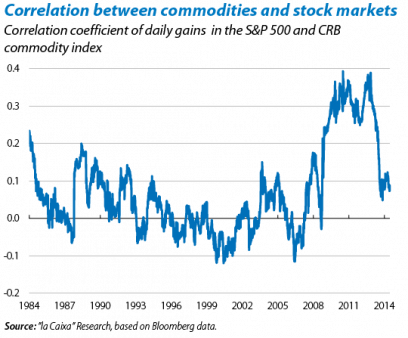